Beautons – a beautifully simple button toolkit. CSS4 Variables and Sass by Jake Albaugh on CodePen. UPDATE April 2016: I wrote up a new approach for this with fallbacks CSS4 Variables with Fallbacks Using Sass. 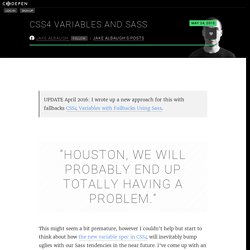 This might seem a bit premature, however I couldn’t help but start to think about how the new variable spec in CSS4 will inevitably bump uglies with our Sass tendencies in the near future. I’ve come up with an idea that will hopefully marry these two in an efficient and practical approach. #The CSS4 Spec For the uninitiated (me a week ago), new CSS variables are going to look like this: The variable --color-background is bound to the scope of the .class selector. You can read more on variables in the W3C Spec, or on the Mozilla Developer Network. #Sass Regardless of whether or not you like the new variable syntax, chances are you already use a pre-processor to manage your variables and would like to continue to do so. $colors: ( primary: #FFBB00, secondary: #0969A2); 3D CSS Shadow Text Tutorial. This easy CSS text shadow tutorial will show you step by step how to create 3D font with multiple css shadows by stacking multiple CSS3 text shadow properties, then go a step further and use the CSS text transform and CSS transition properties to make the 3D text pop out / zoom on hover! 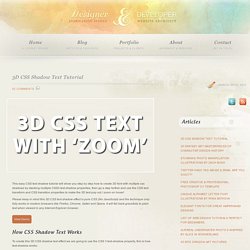 Please keep in mind this 3D CSS text shadow effect is pure CSS (No JavaScript) and the technique only fully works in modern browsers like Firefox, Chrome, Safari and Opera, It will fall back gracefully to plain text when viewed in any Internet Explorer browser. What CSS prefixes should I use? Clippy — CSS clip-path maker.

Text box with background per line and border at bottom line. Multi-Line Padded Text. This is one of those tricky CSS things that I see come up every few months. 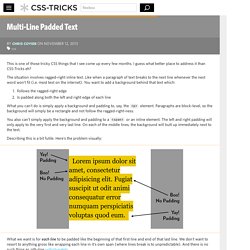 I guess what better place to address it than CSS-Tricks eh? The situation involves ragged-right inline text. Like when a paragraph of text breaks to the next line whenever the next word won't fit (i.e. most text on the internet). You want to add a background behind that text which: Follows the ragged-right edgeIs padded along both the left and right edge of each line What you can't do is simply apply a background and padding to, say, the <p> element.

You also can't simply apply the background and padding to a <span> or an inline element. Describing this is a bit futile. CSS clearfix. CSS3.0 Generator. Conditional Comments - Internet Explorer - CSS Hack - Browser Hack - Hacks für browserüberfreifendes CSS-Design. CSS border gradients. Styling Checkboxes and Radio Buttons With CSS and JavaScript. This JavaScript and CSS will allow you to use custom images to style checkboxes, radio buttons and drop down menu select lists. 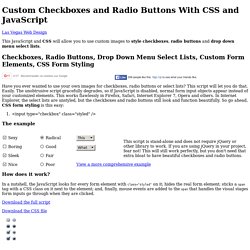 RGBa & HSLa CSS Generator for Internet Explorer. How To Create a Trendy Flat Style Nav Menu in CSS. I’ve heard from a bunch of people who found my CSS drop down menu tutorial really useful, so today’s we’re going to build another menu with some fancy hover effects. 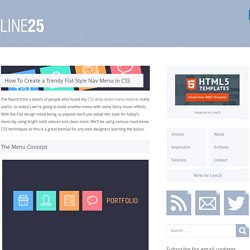 With the Flat design trend being so popular we’ll use adopt this style for today’s menu by using bright solid colours and clean icons. We’ll be using various must-know CSS techniques so this is a great tutorial for any web designers learning the basics. Here’s the menu we’ll be building as part of this tutorial. It’s based on the oh-so-popular flat design trend with solid colours and neat square boxes. The clean icons are courtesy of the Linecons pack and the font we’ll be using via Google Webfonts is Dosis. CSS3 Menu. Free CSS Menu Maker. 40 Tiny Web-Based Tools & Apps for Working With CSS. Create CSS 3D Transform Card Flip Gallery. Introduction CSS 3D is the new black. 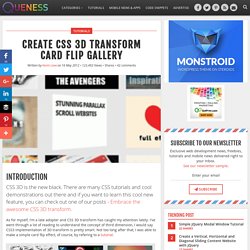 There are many CSS tutorials and cool demonstrations out there and if you want to learn this cool new feature, you can check out one of our posts - Embrace the awesome CSS 3D transform. As for myself, I'm a late adopter and CSS 3D transform has caught my attention lately. I've went through a lot of reading to understand the concept of third dimension, I would say CSS3 implementation of 3D transform is pretty smart. Not too long after that, I was able to make a simple card flip effect, of course, by refering to a tutorial. This tutorial, we are going to apply card flip effect to a set of thumbnail gallery. Equal Column Height With CSS. Ttraditionally, a website consists of the main section and a sidebar on the layout. 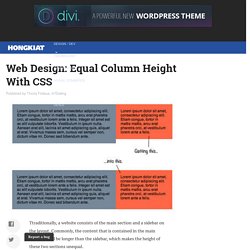 Commonly, the content that is contained in the main section could be longer than the sidebar, which makes the height of these two sections unequal. In some cases, we want the height to be equal. There are actually some solutions to this situation, and one that is frequently recommended is the Faux Column technique. View Demo. CSS 3D Editor. CSS True Titles by Tyler Gaw. CSS. Get the lowdown on the key pieces of Bootstrap's infrastructure, including our approach to better, faster, stronger web development. 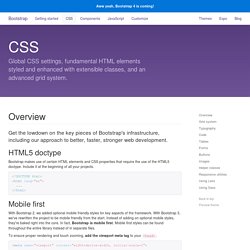 HTML5 doctype Bootstrap makes use of certain HTML elements and CSS properties that require the use of the HTML5 doctype. Include it at the beginning of all your projects. <! DOCTYPE html><html lang="en"> ... Mobile first With Bootstrap 2, we added optional mobile friendly styles for key aspects of the framework. To ensure proper rendering and touch zooming, add the viewport meta tag to your <head>. You can disable zooming capabilities on mobile devices by adding user-scalable=no to the viewport meta tag. Bootstrap sets basic global display, typography, and link styles.

CSS triangle generator. Layout — Chapter 2 — Magic of CSS — Adam Schwartz. In the previous chapter, we learned that each element in the page is a rectangular box. 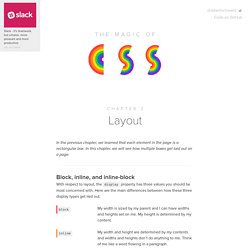 In this chapter, we will see how multiple boxes get laid out on a page. Block, inline, and inline-block With respect to layout, the display property has three values you should be most concerned with. Spend your time innovating, not replicating. Animating CSS-Only Hamburger Menu Icons. Get SourceView Demo Intro Hamburger menu icons have become a staple in many websites and web apps, and whether you like them or not, they are becoming a familiar and recognizable UI action button.

Users are associating this icon with the showing and hiding of menus, and its compact, space-saving nature makes it a desirable style, particularly on smaller screens. In the past, you may have created or downloaded an icon and dropped it into your document. Csscss by zmoazeni. What is it? Csscss will parse any CSS files you give it and let you know which rulesets have duplicated declarations. What is it for? One of the best strategies for me to maintain CSS is to reduce duplication as much as possible. The "Other" Interface: Atomic Design With Sass. Advertisement Today, too many websites are still inaccessible. In our new book Inclusive Design Patterns, we explore how to craft flexible front-end design patterns and make future-proof and accessible interfaces without extra effort. Hardcover, 312 pages. Get the book now! As front-end developers and designers, we’re constantly refining two interfaces simultaneously: one for visitors who load the website, the other for developers who have to tackle the code in the future, when adjustments or full-scale redesigns must be made.

If this is the case, then our convention for naming and organizing files is critical if we are to ensure active (and efficient) development in the future. Recently, I’ve been working on many different projects, each wildly different from each other. 50 Beispiele für geometrische Formen mit CSS3. Der Zweck von CSS ist es, die konkrete Darstellung (Farben, Layout, Schrifteigenschaften usw.) der Elemente eines Web-Dokumentes festzulegen.

Adjust the CSS as desired to change the hover/active color of the link.Added in case you are striving to be an evil genius and you like teasing the monkeys. Battling BEM (Extended Edition): 10 Common Problems And How To Avoid Them. Advertisement Meet the new Sketch Handbook, our brand new Smashing book that will help you master all the tricky, advanced facets of Sketch. Filled with practical examples and tutorials in 12 chapters, the book will help you become more proficient in your work. Get the book now → Whether you’ve just discovered BEM or are an old hand (in web terms anyway!) , you probably appreciate what a useful methodology it is. This article aims to be useful for people who are already BEM enthusiasts and wish to use it more effectively or people who are curious to learn more about it.

Now, I’m under no illusion that this is a beautiful way to name things. The developer in me looked at it pragmatically. 1. To clarify, you would use a grandchild selector when you need to reference an element that is nested two levels deep. CSS3 Shapes. Here you'll find a range off shapes all coded with just pure CSS3 code. Unfortunately not all shapes will render correctly in all browsers, currently only web browsers that support CSS3 will produce the correct geometric shapes. Square Circle Oval Up Triangle Down Triangle. CSS Reference - A free visual guide to the most popular CSS properties. Online CSS3 Code Generator With a Simple Graphical Interface - EnjoyCSS. Block with eliptic border radius. Animation Generator. CSS3 Tools and Snippets. The Ultimate CSS Generator.