Fordfoundation. Why the Ford Foundation wants technologists to join the fight for social justice. As part of our new Technology Fellows program, we’re looking for tech experts to join the foundation’s grant making teams. 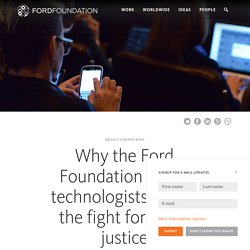 The fellows will help Ford’s program officers, grantees, and partners better leverage the Internet and information technology to advance social justice and challenge inequality. Learn more and apply here. So, why is a foundation hiring technologists? Information technology suffuses every aspect of our lives, and the challenges and opportunities it presents for civil society and social justice are greater than ever. It’s very important that government and public service organizations understand the technical landscape, and how developing technologies can serve the public interest, and we believe philanthropy has a unique role to play in making that happen. As technology transforms the landscape of philanthropy and social justice, the traditional tools of policy, research, regulation, community engagement, and communications simply aren’t enough.

Department of Technology Enhanced Learning. Modern Filmmakers Are 'Content Creators': How to Break into Digital TV. According to a major production company VP, we're at a conjuncture in content creation where there are no rules. 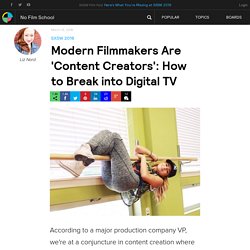 It's time to innovate. If anything became clear from my first day on the ground at SXSW 2016, it’s that “television” is no longer a dirty word for filmmakers. This was crystallized when I showed up to cover a panel called “Breaking into TV in the Digital Age” that took place in a 300-capacity room, and 200 people were turned away. I was one of those people. Fortunately, one of the panelists, Kesila Childers, was kind enough to speak with me after the panel about how independent creators can take advantage of the shifting paradigms in our industry. NFS: So on a real basic level, how does someone who considers themselves a filmmaker start to break into TV?

Childers: Well, first of all, they create something. "If you have an audience already, networks and other distributors will be more interested in working with you. " NFS: So once we’ve created something, what’s the next step? Cinematographers Apply Old Tools With New Tech. Judging by this year’s awards-worthy entrants in the cinematography category, the format wars have been settled, and the winner is “all of the above.” 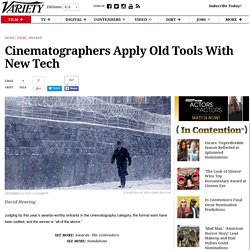 SEE MORE: Awards: The ContendersSEE MORE: Standalone Movies with a legitimate shot at trophies originated on everything from Super 16 film to Ultra Panavision 70, an anamorphic film gauge last used in 1966. Cinematographers have always chosen format and lenses according to the opportunities offered by the story and the demands of the shoot. But today’s proliferation of digital formats, combined with the adaptation of lenses old and new, gives d.p.s an unprecedented range of options.

Many major directors still see the value of shooting film, and the cinematography world is abuzz with anticipation for Quentin Tarantino’s “The Hateful Eight,” a Civil War-era Western photographed by three-time Oscar winner Robert Richardson. Roger Deakins, a perennial nominee, may find his 13th outing to be the charm. Is there a digital look as a new aesthetic value emerging?

Quality in the artistic field or: Technical achievements and their aesthetic consequencesLecture by Rolf Coulanges BVK, translated by Herman Verschuur.at CINEC 2014 / Cine Congress „Creativity in the digital era", Munich 2014 Is there a digital look as a new aesthetic value emerging? 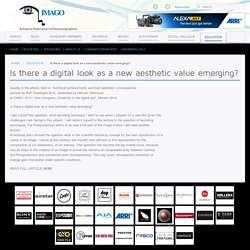 I ask myself this question, what recording technique I want to use when I prepare for a new film given thechallenges I am facing in this project. I will restrict myself in this lecture to the question of recordingtechniques. For Postproduction which is by now a full part of the image control I will need anotherlecture.Everybody asks himself the question what is the scientific-technical concept for the best reproduction of ascene or an image. I would at the contrary ask myself; how efficient is this reproduction for thecomposition of our awareness, of our senses. Three really real questions about the future of virtual reality. 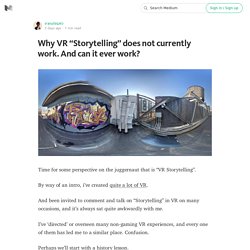 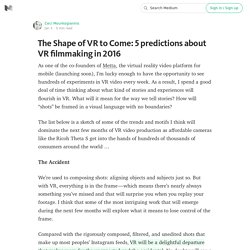