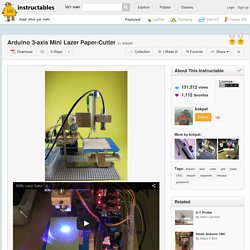 Updated : 18/3 Add photos (cutting vinyl adhesive sheet) Updated : 19/3 Add step 5, acting as pen plotter Updated : 20/3 Add laser engraving video (Wood) and photo Updated : 22/3 Add 2 drawings to show the structures of machine, also visit this link. +++++++++++++++++++ I read many posts and now I had finished my first mini Lazer Cutter. The design is simple and reliable ( u can see the video ) It is using Arduino Duemilanove + GRBL (0.8c) + 100mW blue/ violet lazer with external battery power supply (5V) Drawing program is inkscape + gcodetools, gcode sender is Unversai G Code Sender I want to share with u but it is really difficult for me to explain it in english...

I just want to share some experiences, or, may be u can ask me... Also, most of the technical things (especially about GRBL) u can find in the following articles. Arduino Laser, CNC and Arduino. Laser CNC Cutter on Pinterest. I can not enter the arduino contest. Progetti Arduino, Idroponica e Robot. DIY CNC 1. Arduino Robot Projects no Pinterest. Controlling a Lock with an Arduino and Bluetooth LE. 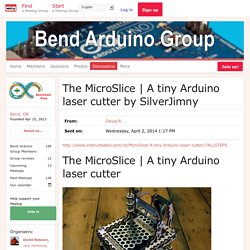 Grbl converts G-Code into commands that the EasyDriver stepper motor controllers understand. We need another program to send the G-Code to Grbl, for this I'll be using Zapmaker's Grbl Controller v3.0. Before you can begin you will need the Arduino IDE, available from the Arduino website. Make sure your Laser Diode is not connected to the power lines while you are configuring your MicroSlice. The Laser will power on & off during the setup & configuration process if it is connected. Grbl's wiki shows you how to flash the pre-compiled Grbl hex file onto your Arduino. For those of you who have a Raspberry Pi, as I do, you'll be pleased to know that you can control the MicroSlice using your Pi! We'll need to generate some G-Code. Pinteres… DIY Laser Engraver. Today’s high-speed DVD drives have less than 40 nanoseconds to heat a bit position on a disk to its phase-change temperature, so anything that stays in the laser’s focus longer had better watch out—or prepare to be burned. 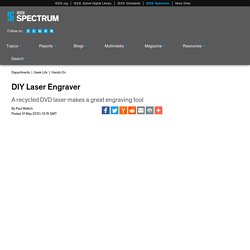 Thus was born the cheap diode-laser cutter and engraver: Get yourself an x-y carriage, a couple of stepper motors, a laser driver circuit, and a controller, and presto! You have an almost powerless, albeit very slow, cousin to the big laser cutters that have revolutionized small-scale flat-pack design and manufacturing. But wait, there’s more—or rather less. Lasersnijder op Pinterest - Lasersnijden, Met en Polaroid. CNC, Routeur Cnc et Arduino. Arduino Proj… PlanetArduino. For a little over a year, I’ve been working on an open-source, DIY cellphone as part of my PhD research at the MIT Media Lab. 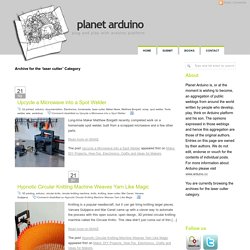 The current version of the phone is based on the Arduino GSM shield and Arduino GSM library. It sports a deliberately low-resolution screen (8 characters, each a 5×7 matrix of LEDs), a laser-cut wooden enclosure, flexure (living hinge) buttons, and a ~1000-line Arduino program that powers the user interface. The phone can make and receive phone calls and text messages, includes a phone book and caller id, and keeps the time. Everything you’d expect from a 20-year old Nokia! (Except snake.) The phone is open-source and the design files are available on GitHub (hardware, software). Of course, it’s not just me that’s been building these phones.

Here you can see some the variations on the enclosure that my friends have made. The phone has undergone numerous revisions as I’ve tried to get it into a robust, useable form. About this project - kickstarter.com. Here's what you need to know. 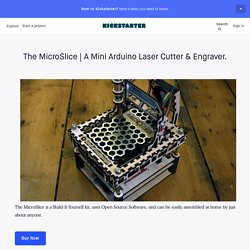 Kickstarter is a place for creative projects. Kickstarter was founded on the belief that creative works and creative expression are essential to a healthy and vibrant society. We think of it as a way around the gatekeepers in all kinds of creative fields, from music to tabletop games. We use an all-or-nothing funding model. When you back a project, you won’t be charged unless it reaches its funding goal. Backing ≠ buying. Making something new is hard. Collections Sections Categories. Projetos Arduino, Drones e Computadores. Mini Laser Cutter. CNC, Cnc Router y Impresora 3d. Recent updates - Kickstarter. Photon Printer – Micro Laser Engraver by Isolt – Thingiverse. The Photon Printer is a 3D printable laser engraver made from recycled DVD Drives. 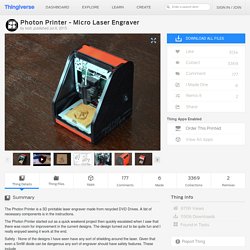 A list of necessary components is in the instructions. The Photon Printer started out as a quick weekend project then quickly escalated when I saw that there was room for improvement in the current designs. The design turned out to be quite fun and I really enjoyed seeing it work at the end. Safety - None of the designs I have seen have any sort of shielding around the laser.

Given that even a 5mW diode can be dangerous any sort of engraver should have safety features. 3D printability – Printing allows for a lot of features that are not included in other versions. • Accurate positioning of components • Fits a wide range of DVD Drives • Z axis fine tuning adjustor • Built in roller door guides • Custom axis mounts • Low part count • Ease of assembly • Buildable by people without access to machining tools • All parts have one large flat surface to aid in printing.