Cream of Potato and Leek Soup Cooking Demo. Witter / ? Uk.businessinsider. Like fashion, there was a lot to love and hate in the food trends of 2014. 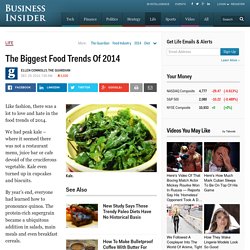 We had peak kale – where it seemed there was not a restaurant menu, juice bar or cafe devoid of the cruciferous vegetable. Kale even turned up in cupcakes and biscuits. By year’s end, everyone had learned how to pronounce quinoa. The protein-rich supergrain became a ubiquitous addition in salads, main meals and even breakfast cereals. While it is unlikely to be disappearing from our plates any time soon, foodies should make way for other hard-to-spell grains next year including freekeh, kamut, amaranth and teff.

Of course paleo diet devotees will not have to worry as grains and bread are banned from their vocabulary – and mouths. The Paleo Cafe, which was started in Cairns in 2012, now has outlets in Sydney, Melbourne, Brisbane and Adelaide – with plans to open further franchisees across the country. The Story of Cross Contamination. Gluten Free Cookies for the Holidays. I recently decided to go gluten-free and, most of the time, it doesn’t really bug me. 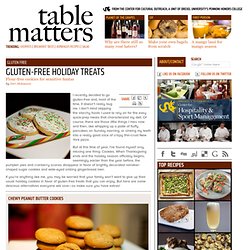 I don’t mind skipping the starchy foods I used to rely on for the easy quick-prep meals that characterized my diet. Of course, there are those little things I miss now and then, like whipping up a plate of fluffy pancakes on Sunday morning, or sinking my teeth into a really good slice of crispy thin-crust New York pizza. But at this time of year, I’ve found myself only missing one thing: Cookies. When Thanksgiving ends and the holiday season officially begins, seemingly earlier than the year before, the pumpkin pies and cranberry scones disappear in favor of brightly decorated reindeer-shaped sugar cookies and wide-eyed smiling gingerbread men.

If you’re anything like me, you may be worried that your family won’t want to give up their usual holiday cookies in favor of gluten-free treats that you can enjoy. Chewy Peanut Butter Cookies Ingredients Instructions Bake for about 12 minutes. Healthy Sugar Cookies. Thai spiced Buffalo and Mushroom Soup. I did it again. 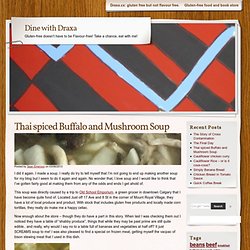 I made a soup. I really do try to tell myself that I’m not going to end up making another soup for my blog but I seem to do it again and again. No wonder that, I love soup and I would like to think that I’ve gotten fairly good at making them from any of the odds and ends I get ahold of. This soup was directly caused by a trip to Old School Emporium, a green grocer in downtown Calgary that I have become quite fond of. Located Just off 17 Ave and 8 St in the corner of Mount Royal Village, they have a lot of local produce and product. Now enough about the store – though they do have a part in this story. Close up on the finished soup Steps: 1. Both juicy AND delicious. 8. add your mushrooms and give them a very quick stir 9. add the stock, pouring through a sieve to catch the spices as you do not want those in the finished soup. 10.

Chocolate Brownies (gluten-free, no added fat) « Vegan Recipes « Vegan Magic. You know those desserts that leave you speechless with their exquisite taste? 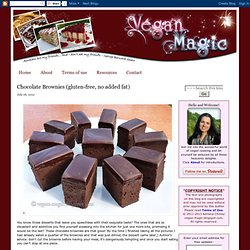 The ones that are so decadent and addictive you find yourself sneaking into the kitchen for just one more bite, promising it would be the last? These chocolate brownies are that good! Recipes, photos, and art – come celebrate food and do it yourself Gluten-free cooking! 10 Delicious Gluten-Free Desserts Kitchn Recipe Roundup. Flourless Chocolate-Walnut Cookies From François Payard. Recipe: Gluten Free Homemade Chai Concentrate. “Venti 1/2 sweet Chai tea latte with Lactaid.” 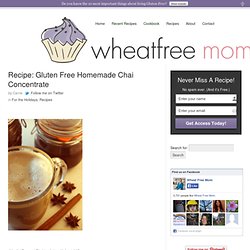 That’s my favorite drink from Starbucks during the winter season. These days that drink costs me around $5.00 which is crazy. I love Starbucks but I’m finding the increased prices a bit much. So what to do? Well in the fall I made homemade pumpkin spice syrup so that I could make my own pumpkin spice tea lattes. This concentrate has very little brown sugar in it but feel free to increase the amount if you have a real sweet tooth. This concentrate makes an excellent Christmas gift as well. Gluten Free Homemade Chai Concentrate 5 cups water10 bags of black tea (earl grey, orange pekoe, or english breakfast)2 cinnamon sticks1 vanilla bean, sliced in half1/2 cup brown sugar12 whole cloves9 cardamon pods1/2 tsp freshly ground nutmeg3 star anise pods1/2 tsp black peppercorns8 corriander seeds 1/2 tsp ground allspice1 Tbsp orange zest1 inch piece of fresh ginger, sliced1 Tbsp honey Instructions: In a large pot, bring water to a boil. 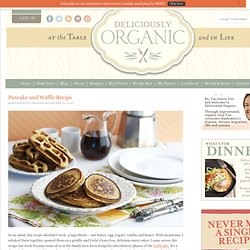 With skepticism, I whisked them together, poured them on a griddle and Viola! Grain-free, delicious sweet cakes. I came across this recipe last week because some of us in the family have been doing the introductory phases of the GAPS diet. It’s a diet to help restore healthy gut flora and a good way to start our family on the right foot this year.