How climate change is driving migration to Europe. America's most embarrassing statistic — and one effort to change it. Every two minutes a woman somewhere in the world dies giving life. 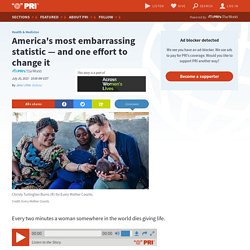 Ninety-nine percent of deaths related to pregnancy and childbirth occur in the developing world. Why is EU free movement so important? - BBC News. Why does free movement of people - one of the founding principles of the European Union - look set to become so important in the debate about whether Britain should remain in the EU? 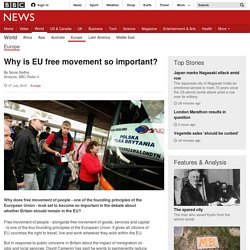 Free movement of people - alongside free movement of goods, services and capital - is one of the four founding principles of the European Union. It gives all citizens of EU countries the right to travel, live and work wherever they wish within the EU. But in response to public concerns in Britain about the impact of immigration on jobs and local services, David Cameron has said he wants to permanently reduce the number of European immigrants coming to Britain. He has promised to make this a key issue in his attempts to negotiate a new deal for Britain ahead of a referendum on our membership of the EU. The science of slums. In an edited extract from his new book, Danny Dorling argues that the idea of the population bomb is a fallacy and that the human population is checking its rise without the need for a grand plan The ‘population bomb’ is a solecism, a grammatical mistake, an absurdity. 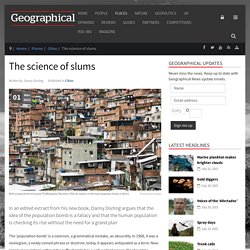 In 1968, it was a neologism, a newly coined phrase or doctrine; today, it appears antiquated as a term. Now simply ‘population’ without the suffix ‘bomb’ has a self-evident power. We should be ‘concerned about population’, we’re told – no longer scared out of our wits, as any sane person would be about a bomb, but concerned. We became scared. Was this due to cataclysmic growth? 4 Maps Crucial to Understanding Europe's Population Shift.

Explicit cookie consent. THE wall of the Bricklayer’s Arms, a pub in the High Town neighbourhood of Luton, displays paper money from all over the world: trophies, explains the landlady, from customers with families living abroad. 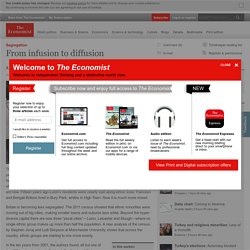 Down the road there is an Afro-Caribbean butcher, a Chinese health shop, a Polish barber and a Swedish restaurant. The shops, and the notes on the pub wall, are new. Fifteen years ago Luton’s residents were clearly split along ethnic lines: Pakistani and Bengali Britons lived in Bury Park; whites in High Town. Now it is much more mixed. Britain is becoming less segregated. Research Matters. Note: Census Bureau experts are presenting on a variety of topics at the Population Association of America annual conference. 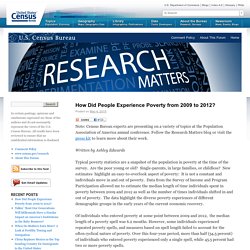 Follow the Research Matters blog or visit the press kit to learn more about their work. Written by Laryssa Mykyta, Statistician, Social, Economic, and Housing Statistics Division After the housing bubble popped in the mid-2000s, foreclosure rates increased fivefold. Explicit cookie consent. ON APRIL 19th an estimated 700 migrants were killed when their boat capsized in the Mediterranean, one of the worst refugee drowning episodes in decades. 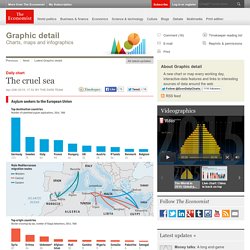 That puts the total number of deaths in the Mediterranean over 1,500 this year. That's a tenfold increase over the same period in 2014, and as the sea warms more are likely to attempt the journey to Europe. Why is the crossing more deadly? Rough weather is partly to blame, as is a rise in violence associated with political instability in Africa and the Middle East. Humanitarian-aid officials emphasise two other factors. 12 Data visualizations that illustrate poverty’s biggest challenges.

Here’s a collection of some of the best data visualizations on global literacy, mortality, birth rates and more that will help put some of the biggest issues surrounding poverty today into perspective. 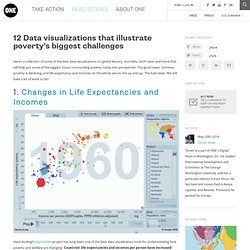 The good news: Extreme poverty is declining, and life expectancy and incomes on the whole are on the up and up. The bad news: We still have a lot of work to do! 1. Changes in Life Expectancies and Incomes Hans Rosling’s Gapminder project has long been one of the best data visualization tools for understanding how poverty and welfare are changing. 2. A World With 11 Billion People? New Population Projections Shatter Earlier Estimates. Adventures in Population Growth. I’ve been playing around with the International Database at the US Census Bureau. 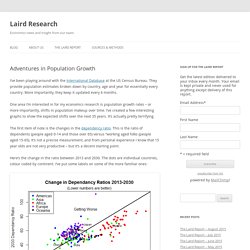 They provide population estimates broken down by country, age and year for essentially every country. More importantly, they keep it updated every 6 months. One area I’m interested in for my economics research is population growth rates – or more importantly, shifts in population makeup over time. I’ve created a few interesting graphs to show the expected shifts over the next 35 years. It’s actually pretty terrifying. Explicit cookie consent. From Germany to Mexico: How America’s source of immigrants has changed over a century. With more than 40 million immigrants, the United States is the top destination in the world for those moving from one country to another. 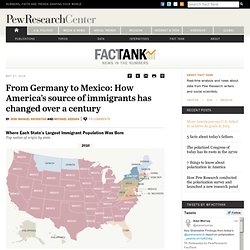 Mexico, which shares a nearly 2,000-mile border with the U.S., is the source of the largest wave of immigration in history from a single country to the United States. But today’s volume of immigrants, in some ways, is a return to America’s past. A century ago, the U.S. experienced another large wave of immigrants. Although smaller at 18.2 million, they hailed largely from Europe. Many Americans can trace their roots to that wave of migrants from 1890-1919, when Germany dominated as the country sending the most immigrants to many of the U.S. states, although the United Kingdom, Canada and Italy were also strongly represented.

Geoenrichment - Infographic. Nytimes : The most common age in America ... Polish people in the UK 1/7. Qatar government admits almost 1,000 fatalities among migrant workers. The major report commissioned by Qatar into its treatment of migrant workers produced more than 60 suggested reforms – and one telling confirmation: that hundreds of workers have died, many of them from unexplained sudden illness, over the past two years, at a rate of more than one a day. 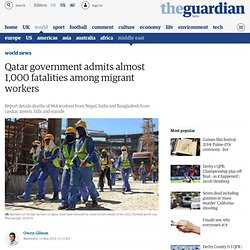 The report by the international law firm DLA Piper calls for changes to the much-criticised kafala system that ties workers to their employers. It also contains the Qatari government's own figure on the numbers of migrants who have died on its soil: 964 from Nepal, India and Bangladesh in 2012 and 2013. In all, 246 died from "sudden cardiac death" in 2012, the report said, 35 died in falls and 28 committed suicide.

Revealed: thousands of Britons on benefits across EU. Unemployed Britons in Europe are drawing much more in benefits and allowances in the wealthier EU countries than their nationals are claiming in the UK, despite the British government’s arguments about migrants flocking in to the country to secure better welfare payments. At least 30,000 British nationals are claiming unemployment benefit in countries around the EU, research by the Guardian has found, based on responses from 23 of the 27 other EU countries. Ten myths about migration. ‘They are taking our jobs’ Immigrants represent 9% of the active population in France and contribute 8.9% to the labour market, according to a study for the French government’s stategic analytical centre in 2012.

They also experience more unemployment than non-immigrants: 16.1% compared to 9.1%, according to data from the same year at the French National Institute of Statistics and Economic Studies (Insee). Immigrants generally work in sectors where they are less qualified or not qualified at all, such as construction, catering or seasonal agriculture. According to a government study conducted at the end of 2012, immigrants comprised about one-third of domestic workers, and a quarter of those working in heavy construction and the building industry.

They are also largely over-represented when it comes to precarious employment, what with part-time work and short-term contracts. Le Monde ‘They deplete welfare budgets’ The Economist sur Twitter : "London’s population is the same size as it was in 1939, but looks very different. TheEconomist : If Poland is to continue to ... TheEconomist : The White House blames the ... U.S. Hispanic and Asian populations growing, but for different reasons. The distinction of being the fastest-growing racial/ethnic group in the United States has alternated between Asians and Hispanics in recent decades. Since 2010, though, Asians have had the edge. New Census Bureau data estimate that the U.S. Hispanic population topped 54 million as of July 1, 2013, an increase of 2.1% over 2012. Meanwhile, the Asian population grew to 19.4 million, with a growth rate of 2.9%.

Why Finnish babies sleep in cardboard boxes. Image copyright Milla Kontkanen For 75 years, Finland's expectant mothers have been given a box by the state. It's like a starter kit of clothes, sheets and toys that can even be used as a bed. And some say it helped Finland achieve one of the world's lowest infant mortality rates. It's a tradition that dates back to the 1930s and it's designed to give all children in Finland, no matter what background they're from, an equal start in life.