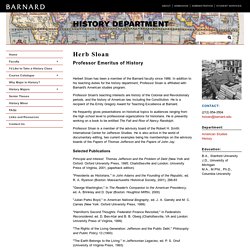 Department of History. Joanne B. 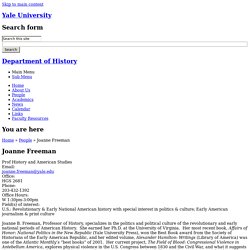 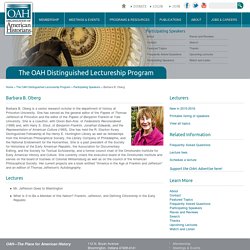 Oberg Barbara B. Oberg is a senior research scholar in the department of history at Princeton University. Display_person.xml - Princeton University History Department. Other Published Works. From the publisher’s description: Acclaimed as the definitive study of the period by one of the greatest American historians, The Rise of American Democracy traces a historical arc from the earliest days of the republic to the opening shots of the Civil War. 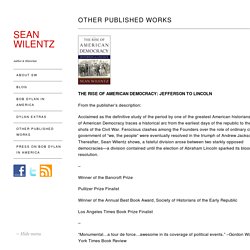 Ferocious clashes among the Founders over the role of ordinary citizens in a government of “we, the people” were eventually resolved in the triumph of Andrew Jackson. Thereafter, Sean Wilentz shows, a fateful division arose between two starkly opposed democracies—a division contained until the election of Abraham Lincoln sparked its bloody resolution. CV. History and Classical Studies. Area of Specialization: Colonial, revolutionary and 19th century American history Jason Opal studies the American Revolution and early United States (1780s-1830s) and is interested in social, intellectual, and political history. 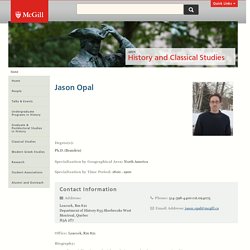 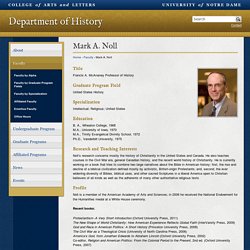 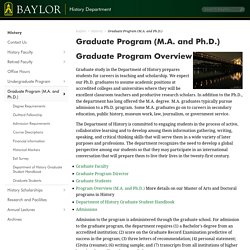 We expect our Ph.D. graduates to assume academic positions at accredited colleges and universities where they will be excellent classroom teachers and productive research scholars. In addition to the Ph.D., the department has long offered the M.A. degree. M.A. graduates typically pursue admission to a Ph.D. program. University of Michigan. University of Wisconsin–Madison. Trained as an historian of Anglo-America, I have become increasingly interested in American religious history and, as both former director of the UW-Madison Religious Studies Program and current director of the Lubar Institute for the Study of the Abrahamic Religions, comparative religion. 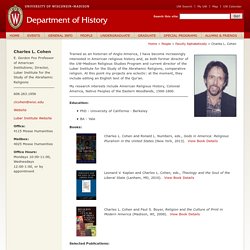 At this point my projects are eclectic: at the moment, they include editing an English text of the Qur'an. My research interests include American Religious History, Colonial America, Native Peoples of the Eastern Woodlands, 1500-1800. Education: PhD - University of California - Berkeley BA - Yale Books: Selected Publications: 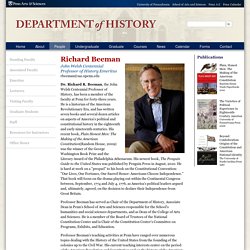 Richard R. Beeman, the John Welsh Centennial Professor of History, has been a member of the faculty at Penn for forty-three years. He is a historian of the American Revolutionary Era, and has written seven books and several dozen articles on aspects of America's political and constitutional history in the eighteenth and early nineteenth centuries. Why Netanyahu Doesn't Need the United States. According to conventional wisdom, the deterioration of U.S. 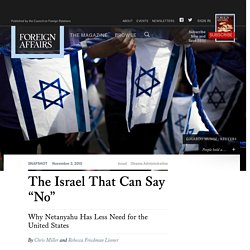 -Israeli relations is the result of personal animosity between Israeli Prime Minister Benjamin Netanyahu and U.S. President Barack Obama. But ill-will is more of a symptom than a cause. In fact, the increased friction reflects a new Israeli grand strategy. Rather than seeking to minimize differences with the United States over Iran and Palestine, as previous Israeli governments had done, Netanyahu has worked to diversify Israel’s international partnerships, cultivating new friends—from India to China to Saudi Arabia—so that Israel is less dependent on the United States. The Gulf Economies' Coming Collapse. Five years ago, the Gulf states of Bahrain, Kuwait, Oman, Qatar, Saudi Arabia, and the United Arab Emirates shared a fiscal surplus of some $600 billion; by 2020, the International Monetary Fund predicts that they will have accumulated a combined deficit of $700 billion.

Sustained low oil prices could make things even worse. This bad news is yet one more reminder of resource-rich Arab states’ need to build vibrant, diversified economies that can withstand the effects of oil price shocks. Although Arab governments have long recognized the need to shift away from an excessive dependence on hydrocarbons, they have had little success in doing so. Iraq, for example, set economic diversification as a core policy objective in one of its first five-year development plans in 1965—yet the country has only become more dependent on oil over time. In Qatar, Kuwait, and Saudi Arabia, too, diversification has been a central, yet largely unrealized, development goal since the 1970s.

Preparation for Marriage and Thoughts on Courtship. Preparation for Marriage and Thoughts on Courtship By Tamara Eaton In Proverbs 31, King Lemuel shares the words of wisdom and advice his mother gave him, saying "Who can find a virtuous woman? For her price is far above rubies... " As a mother, I can identify with how his mother wanted only the best for her son --a wife who would fear and serve the Lord, and delight in following His ways. The following articles were first written for my firstborn son, with a heartfelt prayer that he and his future bride would commit their way unto the Lord, and follow Him with all their hearts. Homeschooling gives us a wonderful opportunity to disciple and train our children in principles for godly living during their most formative years. When Your Twenties Are Darker Than You Expected.

The human body starts dying at age 25. Our twenties slap us with the expiration date of sin’s curse (Genesis 6:3): slowly, in our ligaments; tightly, in our muscle fibers; subtly, checking for bumps; decimally, with a rising BMI. We feel death in our twenties; emotionally and relationally, in ugly and odious ways. Death latches its chain to our frame, slowly pulling us deep into an answer to the question “Death, where is your sting?” (1 Corinthians 15:55). Our twenties bring so many answers to that question — transition, failure, desperation, dependence, accusation, responsibility, moral failure, stagnation, unfulfillment.

Enduring the Uncertainty of Dating. When couples move past the awkward first-date phase of a relationship, many face a new and unsettling tension between strong romantic feelings and the reality that they are not yet married. They ask themselves, “What does a relationship look like with someone who is neither my spouse nor my fiancé?” How does one practice vulnerability without any security, any promises, any covenant? When the Not-Yet Married Meet: Dating to Display Jesus. Dating is dead. So says the media. Girls, stop expecting guys to make any formal attempt at winning your affections. Don’t sit around waiting for a boy to make you a priority, communicate his intentions, or even call you on the phone. Exclusivity and intentionality are ancient rituals, things of the past, and misplaced hopes.

I beg to differ. Dating That Preserves Marriage. Modern Historians Confront the American Revolution. [This article was originally published in Literature of Liberty.] I. ISIS and the Palestine Question. One month ago, the Islamic State (also called ISIS) released a video message to the people of Palestine. The video, in which ISIS members urged Palestinians to remain patient as they actively fight for the caliphate, included a rare public reference to clashes in Gaza between suspected ISIS affiliates and Hamas earlier this year. A Lesson for Netanyahu From a Real Holocaust Historian. This story will feel familiar to Americans. The United States Has Hamstrung the U.N.’s Most Important Mission. How to Be a Jew in France. 5 Inconvenient Truths About Israeli-Palestinian Violence. Saudi Arabia’s Royal Drug Problem. The Arab World’s Challenge.

The fact that this year’s Nobel Peace Prize has been awarded to the Tunisian National Dialogue Quartet – a group of four organizations that played a key role in Tunisia’s attempts to build a pluralistic democracy after its 2011 revolution – demonstrates how important inclusive policies are to the building of a strong democracy. Revenge of the Oligarchs. How Kiev Is Fighting Russia's Misinformation Campaign. To Deescalate in the Donbass, Putin Moves to the Mediterranean. Arab Israeli Identity and the Violence in Jersualem. Why The Islamic State is Doomed to Fail.

The Post-American Middle East. When China Rules the Sea. The Roots of Conflict in the Middle East. Obama Opens the Door to a Syria Deal With Russia and Iran. Obama and Putin Trade Blame Over Syria Debacle, but Agree to Talk. World to Vlad: Put Up or Shut Up in Anti-Terror Fight. Realists, Beware of Russians Making Deals. Religious Persecution as a Global Problem. Fighting ISIS Means Galvanizing Its Resistance. The Islamic State Celebrates Its First Birthday.

The Islamic State Is Forcing Women to Be Sex Slaves. Why Turkey Is Fighting the Kurds Who Are Fighting ISIS. Genocide Under Our Watch. When Multilateralism Met Realism — and Tried to Make an Iran Deal. Education. Living Legends: Oral History Projects Bring Core Subjects to Life. The Worst-Case Scenario for the Global Economy. Moscow's Asian Empire Crumbles. How to Contain Greece's Economic Problems. Why Greece Isn't to Blame for the Crisis. 11 things about the Greek crisis you need to know. EuroZone Profiteers: How German and French Banks Helped Bankrupt Greece. [Daniel W Drezner] Theories of International Poli(Bokos Z1) Explaining the Greek Debt Crisis and What It Means for the Eurozone. The EU Economic Game Is Rigged Against Greece. Breaking Greece. ‘Debt vs democracy': Anti-poverty campaigners stage Greek solidarity protest in London. The Real Reason Germans Can’t Stomach Greek Debt? Nazis.

Why Foreign Aid Is Hurting Africa. The Battle for Moscow, Turning Point of the War. University of Oxford, Theology Faculty. Master of Arts in Church History (MACH) Degree Program. M.A. in History of Christianity Admission Requirements. Graduate courses — Faculty of Divinity. MLitt in Theology and Religious Studies. Salvation-Condemnation - Thompson Chain Reference - 1 Timothy 4:10 Interlinear: for for this we both labour and are reproached, because we hope on the living God, who is Saviour of all men.

Greece through the rear-view mirror.