The invisible parts of CSS · MadebyMike. 03 Apr 2017 If you use CSS in your daily work, your primary goal is probably focused around making things ‘look right’. 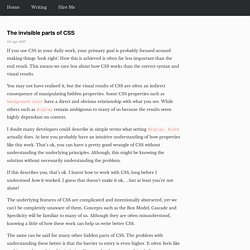 How this is achieved is often far less important than the end result. This means we care less about how CSS works than the correct syntax and visual results. Dynamic Drive JavaScripts- Mega Dropline Menu. Description: Mega Drop Line Menu uses leans heavily on CSS3 to create a modern Drop Line Menu with support for infinite levels of sub menus. 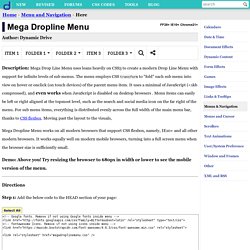 The menu employs CSS transform to "fold" each sub menu into view on hover or onclick (on touch devices) of the parent menu item. It uses a minimal of JavaScript (<1kb compressed), and even works when JavaScript is disabled on desktop browsers . Menu items can easily be left or right aligned at the topmost level, such as the search and social media icon on the far right of the menu.

For sub menu items, everything is distributed evenly across the full width of the main menu bar, thanks to CSS flexbox. Moving past the layout to the visuals, Mega Dropline Menu works on all modern browsers that support CSS flexbox, namely, IE10+ and all other modern browsers. Demo: Above you! Directions Step 1: Add the below code to the HEAD section of your page: This script uses the following external files.

Step 2: Then, add the below sample markup to your page: 70 Expert Ideas For Better CSS Coding - HackHands. CSS isn’t always easy to deal with. 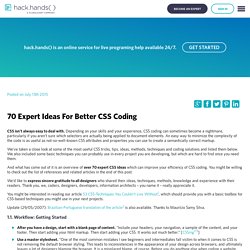 Depending on your skills and your experience, CSS coding can sometimes become a nightmare, particularly if you aren’t sure which selectors are actually being applied to document elements. An easy way to minimize the complexity of the code is as useful as not-so-well-known CSS attributes and properties you can use to create a semantically correct markup. We’ve taken a close look at some of the most useful CSS tricks, tips, ideas, methods, techniques and coding solutions and listed them below. We also included some basic techniques you can probably use in every project you are developing, but which are hard to find once you need them.

And what has come out of it is an overview of over 70 expert CSS ideas which can improve your efficiency of CSS coding. We’d like to express sincere gratitude to all designers who shared their ideas, techniques, methods, knowledge and experience with their readers. 1.1. Reset your CSS-styles first. 1.2. Step by step CSS float tutorial. Floatutorial takes you through the basics of floating elements such as images, drop caps, next and back buttons, image galleries, inline lists and multi-column layouts. 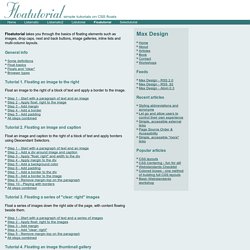 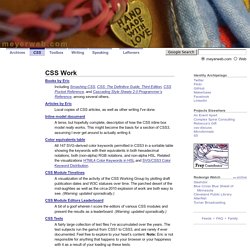 Articles by Eric Local copies of CSS articles, as well as other writing I've done. Inline model document A terse, but hopefully complete, description of how the CSS inline box model really works. Color equivalents table All 147 SVG-derived color keywords permitted in CSS3 in a sortable table showing the keywords with their equivalents in both hexadecimal notations, both (non-alpha) RGB notations, and non-alpha HSL. CSS Module Timelines A visualization of the activity of the CSS Working Group by plotting draft publication dates and W3C statuses over time. CSS Module Editors Leaderboard A bit of a goof wherein I score the editors of various CSS modules and present the results as a leaderboard. CSS Tests A fairly large collection of test files I’ve accumulated over the years. W3C CSS2 Test Suite Prototyping Offsite. CSS - Learn web development. Cascading Stylesheets — or CSS — is the second technology you should start learning after HTML. 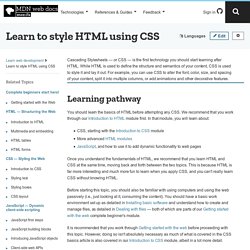 Whereas HTML is used to define the structure and semantics of your content, CSS is used to style it and lay it out. So for example, you can use CSS to alter the font, color, size and spacing of your content, split it into multiple columns, or add animations and other decorative features. CSS Floats 101 · An A List Apart Article. The float property is a valuable and powerful asset to any web designer/developer working with HTML and CSS. 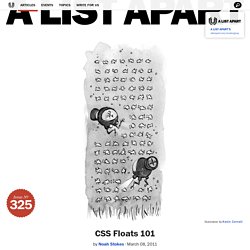 Tragically, it can also cause frustration and confusion if you don’t fully understand how it works. Article Continues Below Also, in the past, it’s been linked to some pretty nasty browser bugs so it’s normal to get nervous about using the float property in your CSS rule sets. Let’s calm those nerves and ease that frustration. I’ll show you exactly what the float property does to your elements and how incredibly useful it can be once you master it. We see floats in the print world every time we pick up a magazine article with an image on the left or right with text flowing nicely around it. The definition#section1 Let’s start with the definition of a float.

A float is a box that is shifted to the left or right on the current line.