Internals. Architecture. Windows Service. Networking. Weekend Project: Introduction to ASP.NET Core + Docker Applications. Sass: Sass Basics. Before you can use Sass, you need to set it up on your project. 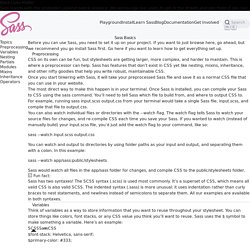 If you want to just browse here, go ahead, but we recommend you go install Sass first. Go here if you want to learn how to get everything setup. Preprocessing CSS on its own can be fun, but stylesheets are getting larger, more complex, and harder to maintain. This is where a preprocessor can help. Once you start tinkering with Sass, it will take your preprocessed Sass file and save it as a normal CSS file that you can use in your website. The most direct way to make this happen is in your terminal. You can also watch individual files or directories with the --watch flag. Sass --watch input.scss output.css You can watch and output to directories by using folder paths as your input and output, and separating them with a colon.

Sass --watch app/sass:public/stylesheets Sass would watch all files in the app/sass folder for changes, and compile CSS to the public/stylesheets folder. Variables SCSS Syntax Sass Syntax CSS Output Nesting. Ligershark/WebOptimizer: A bundler and minifier for ASP.NET Core. Razor Pages, TypeScript and Knockout. In this article, I look at the steps required to get TypeScript up and running in the context of a Razor Pages application. 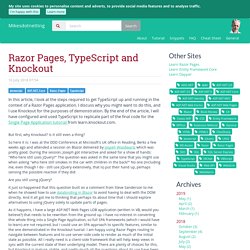 I discuss why you might want to do this, and I use Knockout for the purposes of demonstration. By the end of the article, I will have configured and used TypeScript to replicate part of the final code for the Single Page Application tutorial from learn.knockout.com. But first, why Knockout? Is it still even a thing? So here it is: I was at the DDD Conference at Microsoft's UK office in Reading, Berks a few weeks ago and attended a session on Blazor delivered by Jospeh Woodward, which was pretty good. It just so happened that this question built on a comment from Steve Sanderson to me when he showed how to use databinding in Blazor to avoid having to deal with the DOM directly. As it happens, I have a large ASP.NET Web Pages LOB application (written in VB, would you believe?)

TypeScript TypeScript has been around for quite a while now. Configuring TypeScript Summary. Using Unobtrusive Ajax In Razor Pages. There are a few demonstrations showing how to use the jQuery Unobtrusive AJAX library in ASP.NET Core, but existing examples tend to feature MVC applications. 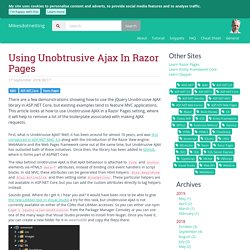 This article looks at how to use Unobtrusive AJAX in a Razor Pages setting, where it will help to remove a lot of the boilerplate associated with making AJAX requests. First, what is Unobtrusive AJAX? Well, it has been around for almost 10 years, and was first introduced in ASP.NET MVC 3.0 along with the introduction of the Razor View engine. WebMatrix and the Web Pages framework came out at the same time, but Unobtrusive AJAX has outlasted both of those initiatives. Since then, the library has been added to GitHub, where is forms part of ASPNET Core. The idea behind Unobtrusive AJAX is that AJAX behaviour is attached to form and anchor elements via HTML5 data-* attributes, instead of binding click event handlers in script blocks. Model validation in ASP.NET Core MVC. Introduction to Razor Pages in ASP.NET Core. Creating the simplest possible ASP.NET Core form with a POST method. Getting started with ASP .NET Core – Yassine Benabbas. ASP .NET Core is an open source framework that allows to build 💪 cloud-based applications such as web servers, IoT and mobile APIs / backbends. 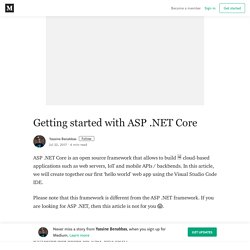 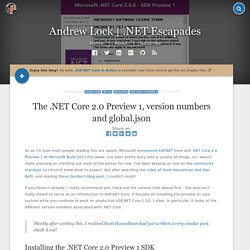 I've been pretty busy with a variety of things, so I wasn't really planning on checking out most of the pieces for now. I've been keeping an eye on the community standups so I kind of knew what to expect. But after watching the video of Scott Hanselman and Dan Roth, and reading Steve Gordon's blog post, I couldn't resist! If you haven't already, I really recommend you check out the various links above first - this post isn't really meant to serve as an introduction to ASP.NET Core, it focuses on installing the preview on your system while you continue to work on production ASP.NET Core 1.0/1.1 sites. In particular, it looks at the different version numbers associated with .NET Core. Shortly after writing this, I realised Scott Hanselman had just written a very similar post, check it out!

Method chaining - Wikipedia. While chaining is syntax, it has semantic consequences, namely that requires methods to return an object, and if implementing cascading via chaining, this must be the current object. 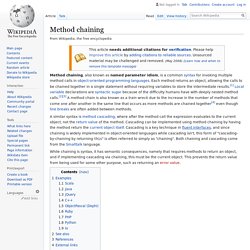 This prevents the return value from being used for some other purpose, such as returning an error value. Examples[edit] Scala[edit] A paradigm in functional programming is immutability in method chaining Java[edit] By contrast, here is a non-chained equivalent: jQuery[edit] jQuery relies heavily on chaining. // chaining$("#person").slideDown('slow') .addClass('grouped') .css('margin-left', '11px'); // no chainingvar p = $('#person');p.slideDown('slow');p.addClass('grouped');p.css('margin-left', '11px'); C++[edit] Method chaining can be expressed in C++ as follows: ObjectPascal (Dephi)[edit] Method chaining can be expressed in ObjectPascal as follows:

Java - When would you use the Builder Pattern? Cutting Edge - ASP.NET Core for ASP.NET Developers.