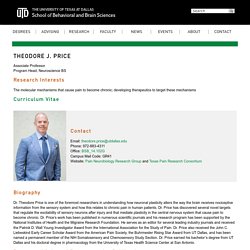 Theodore Price is one of the foremost researchers in understanding how neuronal plasticity alters the way the brain receives nociceptive information from the sensory system and how this relates to chronic pain in human patients. Dr. Choice page. Pain is not just a matter of nerves. The sensation of pain occurs when neural pathways conduct excitation generated by tissue damage to the spinal cord, where the nociceptive information is extensively pre-processed. 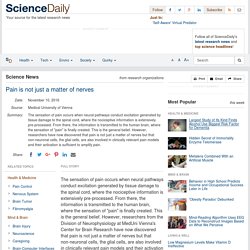 From there, the information is transmitted to the human brain, where the sensation of "pain" is finally created. This is the general belief. However, researchers from the Division of Neurophysiology at MedUni Vienna's Center for Brain Research have now discovered that pain is not just a matter of nerves but that non-neuronal cells, the glial cells, are also involved in clinically relevant pain models and their activation is sufficient to amplify pain. The study has now been published in the leading journal "Science. " Pain from rejection, physical pain may not be so similar after all. Over the last decade, neuroscientists have largely come to believe that physical pain and social pain are processed by the brain in the same way. 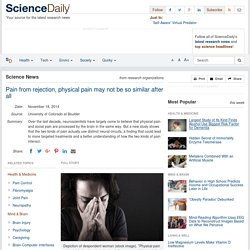 But a new study led by the University of Colorado shows that the two kinds of pain actually use distinct neural circuits, a finding that could lead to more targeted treatments and a better understanding of how the two kinds of pain interact. For the study, published in the journal Nature Communications, the researchers used a technique recently borrowed from the computer science field by neuroscientists--multivariate pattern analysis--to examine brain scans that were taken while people looked at a picture of someone who had rejected them. Jymmin: How a combination of exercise and music helps us feel less pain. Often, pain emerges as a consequence of disease, injury or intense physical demands. 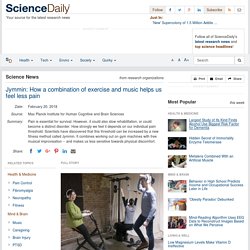 About seven per cent of adults in Germany experience chronic pain and feel constrained by it. There are several options to help manage this. A new alternative to painkillers or heat therapy could be Jymmin, a mixture of working out on gym machines and free musical improvisation, jamming, developed by scientists at the Max Planck Institute for Human Cognitive and Brain Sciences (MPI CBS) in Leipzig. They found out that this new fitness technology makes us less sensitive to pain. Holding hands can sync brainwaves, ease pain, study shows. Reach for the hand of a loved one in pain and not only will your breathing and heart rate synchronize with theirs, your brain wave patterns will couple up too, according to a study published this week in the Proceedings of the National Academy of Sciences (PNAS). 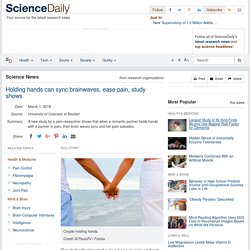 The study, by researchers with the University of Colorado Boulder and University of Haifa, also found that the more empathy a comforting partner feels for a partner in pain, the more their brainwaves fall into sync. And the more those brain waves sync, the more the pain goes away. How Gabapentin Differs From Pregabalin. Neuropathic pain causes significant morbidity in the United States. 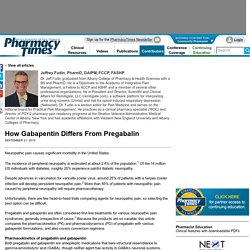 The incidence of peripheral neuropathy is estimated at about 2.4% of the population.1 Of the 14 million US individuals with diabetes, roughly 25% experience painful diabetic neuropathy. Despite advances in vaccination for varicella zoster virus, around 25% of patients with a herpes zoster infection will develop persistent neuropathic pain.2 More than 85% of patients with neuropathic pain caused by peripheral neuropathy will require pharmacotherapy. Unfortunately, there are few head-to-head trials comparing agents for neuropathic pain, so selecting the best option can be difficult. Pregabalin and Gabapentin for Neuropathic Pain CRPS. 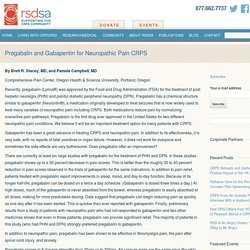 Stacey, MD, and Pamela Campbell, MD Comprehensive Pain Center, Oregon Health & Science University, Portland, Oregon Recently, pregabalin (Lyrica®) was approved by the Food and Drug Administration (FDA) for the treatment of post herpetic neuralgia (PHN) and painful diabetic peripheral neuropathy (DPN). Pregabalin has a chemical structure similar to gabapentin (Neurontin®), a medication originally developed to treat seizures that is now widely used to treat many varieties of neuropathic pain including CRPS. Nociceptor sensitization in pain pathogenesis. Why Does Pain Make Us Irritable? Injured Squid, Sea Bass Can Tell Us. Being in pain can put you in a bad mood for the rest of the day, but why? 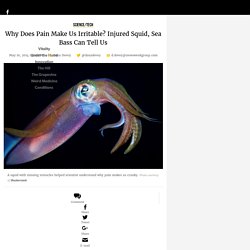 Believe it or not the answer is more than simply "because it hurts," and has to do with a biological survival mechanism. Topical capsaicin for pain management: therapeutic potential and mechanisms of action of the new high-concentration capsaicin 8% patch. 10 Piriformis Stretches To Help You Get Rid Of Sciatica, Hip And Lower Back Pain. Hip and lower back pain can come as a result of an irritation of the sciatic nerve. This pain can spread downwards and can affect the limbs and the feet.

It is something many people suffer from, and the pain can affect your daily routine. Medscape: Medscape Access. TBL. Title: B-cell-targeted therapy in systemic vasculitis.Author: Lally L; Spiera RJournal: Curr Opin Rheumatol; 2016 Jan; 28(1):15-20. 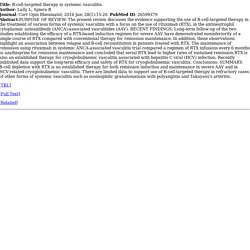 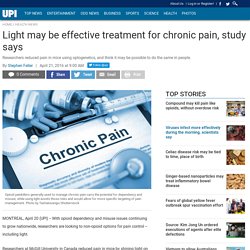 Researchers at McGill University in Canada reduced pain in mice by shining light on the affected area using a technique called optogenetics, according to a study published in the journal eNeuro. Optogenetics uses light to control neurons, in the case of pain by turning them off when light shines on them. Researchers think the non-invasive specificity of using light, as well as eliminating concerns about opioid drug dependency for people using the drugs over long periods of time, could be a better method for controlling chronic pain. While the technology is not at a point that researchers think it is applicable to humans, they envision methods by which it could be used. 'Pain paradox' may lead to more effective pain treatment. LEEDS, England, July 28 (UPI) -- A substance that activates pain in the central nervous system was found by researchers to also reduce pain in the peripheral nervous system, a finding researchers say is surprising but could help improve methods of pain management.

Researchers in England and China discovered the paradox of Substance P, which they say explains why some pain control drugs work in the lab but not in clinical trials, according to a recent study published in the journal Antioxidants and Redox Signaling. Substance P is a peptide that in the central nervious system excites nerve cells and promotes pain responses, but in the peripheral nervous system acts like a natural painkiller. This, researchers say, is why efforts to suppress it in the central nervous system also suppress it in the peripheral nervous system, promoting pain. Compound may kill pain like opioids, without overdose risk. WASHINGTON, Aug. 18 (UPI) -- Opioid painkillers allow doctors to perform a range of procedures knowing they can eliminate pain during recovery, but the drugs pose a risk to health because they suppress breathing and are highly addictive. Researchers at four universities designed a compound that successfully killed pain while appearing not to suppress breathing or induce addictive behavior in mice, suggesting it has potential for safer use with humans, according to a study published in the journal Nature.

Morphine has been used in medicine since the 19th century when chemists purified it for use in treatment. The main drawbacks of the drug, and others derived from the opium poppy such as oxycodone, codeine and fentanyl, come from side effects. Opioid drugs bind to the mu opioid receptor in the brain, taking advantage of a chemical pathway to kill pain. When they do this, though, the chemicals also activate another pathway suppressing respiration. "Morphine transformed medicine," Dr. An Error Occurred Setting Your User Cookie. An Error Occurred Setting Your User Cookie. Targeting Brain Cells to Alleviate Neuropathic Pain – Neuroscience News.

Summary: New findings suggest neuropathic pain could be prevented. Source: Rutgers. Rutgers scientists say research indicates that the chronic condition could be prevented. Neuropathic pain – which affects more than 1 million Americans – could be reduced or even eliminated by targeting brain cells that are supposed to provide immunity but, in some instances, do the opposite, causing chronic pain that could last a lifetime. “The general thought has been that these cells are supposed to be beneficial in the nervous system under normal conditions” said Long-Jun Wu, a professor of cell biology and neuroscience at Rutgers University. “But, in fact, in those with this neuropathic pain the cells, known as microglia, have proliferated and instead become toxic.” “If we can catch that window within one to five days to inhibit microglia after nerve injury, we can partially reverse the development of chronic pain,” said Wu.

About this neuroscience research article Cite This NeuroscienceNews.com Article. Infections and Antibiotic Use Linked to Manic Episodes in People With Serious Mental Illness – Neuroscience News. Summary: A new study appears to add to the growing evidence that the immune system may play a vital role in some psychiatric disorders.

Source: Johns Hopkins Medicine. In research using patient medical records, investigators from Johns Hopkins and Sheppard Pratt Health System report that people with serious mental disorders who were hospitalized for mania were more likely to be on antibiotics to treat active infections than a group of people without a mental disorder. Although the researchers caution that their study does not suggest cause and effect, they note that it does suggest that an infection, use of antibiotics or other factors that change the body’s natural collection of gut and other bacteria may individually or collectively contribute to behavioral changes in some people with mental disorders.

Yolken says his team’s study grew out of an interest in long-observed connections among infections, the microbiome and symptoms of mental illness. About this psychology research article. Menstrual Headache And Estrogen: Female Hormone Drops More Rapidly In Migraine Sufferers : HEALTH : Tech Times. Analysis of first morning urine samples showed link between the female sex hormone and migraine. Medscape Access. Cells carry 'memory' of injury, which could reveal why chronic pain persists. A new study from King's College London offers clues as to why chronic pain can persist, even when the injury that caused it has gone.

Although still in its infancy, this research could explain how small and seemingly innocuous injuries leave molecular 'footprints' which add up to more lasting damage, and ultimately chronic pain. All of us are likely to know someone who suffers from persistent pain - it is a very common condition, which can be caused by sports injuries, various diseases and the process of ageing. Treatment options are limited and doctors are often unable to offer anything more than partial relief with painkillers, leaving their patients resigned to suffering. While chronic pain can have many different causes, the outcome is often the same: an overly sensitive nervous system which responds much more than it normally would. Text - S.524 - 114th Congress (2015-2016): Comprehensive Addiction and Recovery Act of 2016. To authorize the Attorney General to award grants to address the national epidemics of prescription opioid abuse and heroin use.

Patients would no longer have to wake up in the middle of the night to take their pills, Purdue told doctors. Scientists demonstrate that electrical stimulation of deep brain structures under the cortex could help ease chronic pain - UTA News Center. Medscape Access. Draft CDC Guideline for Prescribing Opioids for Chronic Pain. The Problem Existing guidelines vary in recommendations, and primary care providers say they receive insufficient training in prescribing opioid pain relievers. It is important that patients receive appropriate pain treatment, and that the benefits and risks of treatment options are carefully considered. 259 million. Orthofeet Diabetic Footwear, Comfort Shoes, Orthotics & More. Medscape Log In. Herbal Options for Managing Adrenal Fatigue. Think of adrenal fatigueas the "waiting room" for type-2 diabetes, hypothyroidism and heart attack.

As a disease classification, it hangs out there with other "pre-" conditions like"pre-diabetes" and "pre-hypertension," and is a strong indicator of which direction a patient's health is headed; namely, down. The exhaustion of the body's ability to react to the signals from the brain and pituitary gland inevitably contributes to disease states like type-2 diabetes, hypertension, and hypothyroidism. The effects of opioids and opioid analogs on animal and human endocrine systems. Pain Sensitivity Related to Brain Structure.