Inkling UK Millennial Report. Pwc 2016 holiday report. 5 Stereotypes of Millennials at Work. Generation Y has been labelled a bunch of lazy job-hoppers—the truth is very different This article titled “Millennials at work: five stereotypes – and why they are (mostly) wrong” was written by Aisha Gani, for theguardian.com on Tuesday 15th March 2016 11.01 UTC Millennials will make up half of the global workforce by 2050. 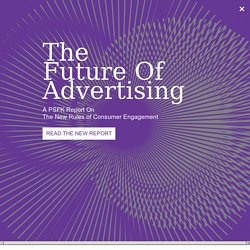 Although generalisations are not helpful, broadly speaking members of this generation, born between 1980 and 1994 and also known as Generation Y, are bound together by the fact they have come of age during a severe financial crisis, have been both the pioneers and guinea pigs of technological change, and are more plugged into a global network than their predecessors. Now they’re in the workforce, it should be no surprise that they are working differently too. Loneliness: a silent plague that is hurting young people most. Loneliness has finally become a hot topic – last month, the Office for National Statistics found Britain to be the loneliness capital of Europe. 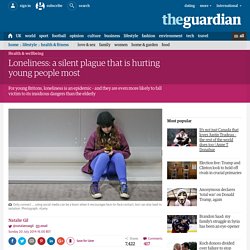 We're less likely to have strong friendships or know our neighbours than residents anywhere else in the EU, and a relatively high proportion of us have no one to rely on in a crisis. Meanwhile, earlier this year, research by Professor John Cacioppo at the University of Chicago found loneliness to be twice as bad for older people's health as obesity and almost as great a cause of death as poverty. But shocking as this is, such studies overlook the loneliness epidemic among younger adults.

In 2010 the Mental Health Foundation found loneliness to be a greater concern among young people than the elderly. The 18 to 34-year-olds surveyed were more likely to feel lonely often, to worry about feeling alone and to feel depressed because of loneliness than the over-55s. Millennials Impact of their Behaviour on Global Consumer Markets. This year, Millennials will overtake Baby Boomers. By Richard Fry This year, the “Millennial” generation is projected to surpass the outsized Baby Boom generation as the nation’s largest living generation, according to the population projections released by the U.S. 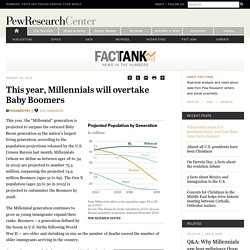 Census Bureau last month. Millennials (whom we define as between ages 18 to 34 in 2015) are projected to number 75.3 million, surpassing the projected 74.9 million Boomers (ages 51 to 69). The Gen X population (ages 35 to 50 in 2015) is projected to outnumber the Boomers by 2028. The Millennial generation continues to grow as young immigrants expand their ranks. Generations are analytical constructs and it takes time for popular and expert consensus to develop as to the precise boundaries demarcating one generation from another. Here’s a look at some generational projections: Millennials The Census Bureau projects that the Millennial population was 74.8 million in 2014. Where Millennials Learn About Money Over Plates Of Chocolate Mousse With Ginger Cream. It’s Friday night and I’m hitting up a supper club in Brookline, a yuppie neighborhood outside Boston. 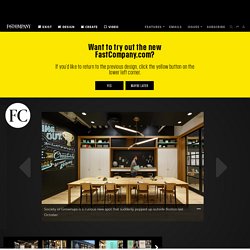 Rather than meeting at someone’s house, the event is taking place at the Society of Grownups clubhouse, a curious new spot that suddenly popped up last October. Entering through the glass doors, there’s a sleek coffee bar manned by a smiling bartender-barista and a large communal table surrounded by bookshelves. But taking a look at the menu board, it’s clear this is not another trendy coffee shop. Available for purchase are coffee ($3) and tea ($2). But also financial check-ups ($20), short classes on subjects like negotiating your salary or buying a home ($30), and, of course, tickets to supper clubs ($40). As I sit waiting for dinner to begin, people from the neighborhood trickle in, curious about what this is all about.

Society of Grownups’ parent company is Mass Mutual, but Naqui tells me that it will be run as an independent company that provides neutral advice. Millennials Are Starting to Change the Stock Market. Alistair Owen pours most of his paycheck into what he calls a travel-and-lifestyle fund. 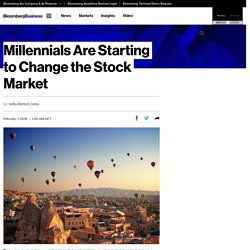 “I’m not saving up to buy anything,” said the 28-year-old engineer, who shares a rented apartment with two flatmates in south London. “I prefer to go out for dinner at a nice place, pay a round at the pub or explore a new area of the world. I feel like I would be losing out on living if I chose to own stuff instead.” The stock market is starting to reflect his priorities and those of his generation -- the millennials, those born between 1980 and 2000. Leisure and travel-related stocks, including pubs, airlines and pizza restaurants, have trumped retailers since consumer confidence picked up following the financial crisis.

“Experiences help millennials shape their identity and create memories, to a greater degree than for older generations,” said Sarbjit Nahal, head of thematic investing at Bank of America Corp. in London. Who Are Millennials. Believe that they have equal responsibility of child care Greater millennialbrand love Compared to 19% of non-millennials 46% of millennials post original photos or video online that they themselves have created Millennials value brands that enhance their lives. 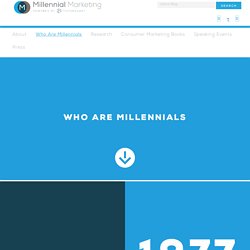 New tech must serve a purpose in order be considered "cool"