The rapidly increasing trend of cannabis use in burn injury. 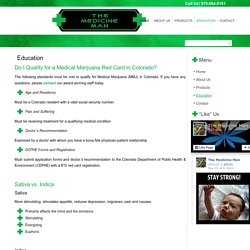 The following standards must be met to qualify for Medical Marijuana (MMJ) in Colorado. If you have any questions, please contact our award-winning staff today. Age and Residency Must be a Colorado resident with a valid social security number. Pain and Suffering Must be receiving treatment for a qualifying medical condition Doctor’s Recommendation Examined by a doctor with whom you have a bona fide physician-patient relationship DCPHE Forms and Registration Must submit application forms and doctor’s recommendation to the Colorado Department of Public Health & Environment (CDPHE) with a $15 red card registration. 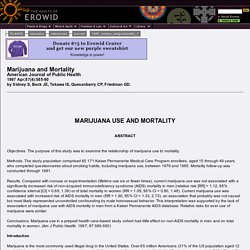 The purpose of this study was to examine the relationship of marijuana use to mortality. Methods. The study population comprised 65 171 Kaiser Permanente Medical Care Program enrollees, aged 15 through 49 years, who completed questionnaires about smoking habits, including marijuana use, between 1979 and 1985. Mortality follow-up was conducted through 1991. Results. Conclusions. Introduction Marijuana is the most commonly used illegal drug in the United States. The only other large-scale study of marijuana use and mortality was performed in a cohort of 45 540 male Swedish conscripts, aged 18 through 20 years at baseline and followed for 15 years. 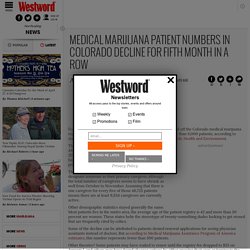 From October to November 2011, the registry lost more than 8,000 patients, according to statistics released yesterday by the Colorado Department of Public Health and Environment. The number of patients on the registry is now roughly 48,000 lower than its peak enrollment of 128,698 in June 2011. The decline to 80,558 patients shows that more than half of the 161,483 patients who have registered with the program since 2001 have not renewed their cards.

The majority of patients (46,723 or 58 percent) still designate someone as their primary caregiver, although the total number of caregivers seems to have shrunk as well from October to November. Other demographic statistics stayed generally the same. Some of the decline can be attributed to patients denied renewal applications for seeing physician assistants instead of doctors.

Quality and CBD. Marijuana and Medicine in the States - SAM. •A major study published in Drug and Alcohol Dependence by researchers at Columbia University looked at two separate data sets and found that residents of states with medical marijuana had marijuana abuse/dependence.i •An additional study in the September 2011 issue of Annals of Epidemiology found that, among youths age 12-17, marijuana use rates were higher in states with medical marijuana laws (8.6%) compared with those without such laws (6.9%).ii • A study published in the Harm Reduction Journal (not exactly an anti—drug mouthpiece), analyzing more than 3,000 “medical marijuana users in California, found that an overwhelming majority (87.9%) of those queried about the details of their marijuana initiation had tried it before the age of 19, and the average user was a 32–year–old, white male. 74% of the Caucasians in the sample had used cocaine, and more than 50% had used methamphetamine in their lifetime.iii rates almost twice as high as states without such laws.i iii O’Connell, T. 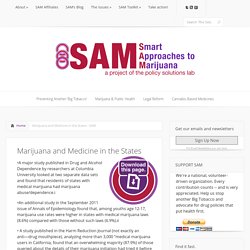 Cannabis and Cannabinoids. Cannabinoids are a group of 21-carbon–containing terpenophenolic compounds produced uniquely by Cannabis species (e.g., Cannabis sativa L.) .[1,2] These plant-derived compounds may be referred to as phytocannabinoids. 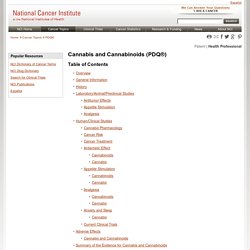 Although delta-9-tetrahydrocannabinol (THC) is the primary psychoactive ingredient, other known compounds with biologic activity are cannabinol, cannabidiol (CBD), cannabichromene, cannabigerol, tetrahydrocannabivarin, and delta-8-THC. CBD, in particular, is thought to have significant analgesic and anti-inflammatory activity without the psychoactive effect (high) of delta-9-THC. Department of Public Health and Environment. Centers Carrying Our Products. Average Tax for MEdical VS Retail Colorado. Regulators may examine legal marijuana production caps to curb black market sales After seven months of recreational marijuana sales in Colorado, the newest goal of state regulators is to increase the amount of marijuana produced and sold by legal retailers. 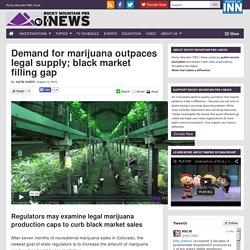 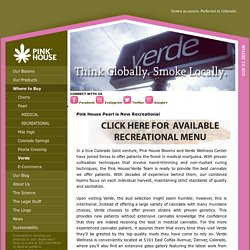 With proven cultivation techniques that involve hand-trimming and non-rushed curing techniques, the Pink House/Verde Team is ready to provide the best cannabis we offer patients. With decades of experience behind them, our combined teams focus on each individual harvest, maintaining strict standards of quality and sanitation. Upon visiting Verde, the bud selection might seem humble; however, this is intentional. Federal Tax Burns Up Recreational Pot Profit. Joe Mahoney / Rocky Mountain PBS I-News Mitch Woolhiser owner of Northern Lights Cannabis Company, rubs his forehead as he talks about federal taxes he pays from operating his medical and recreational marijuana store in Edgewater, Colo., on Friday, Oct., 31, 2014. 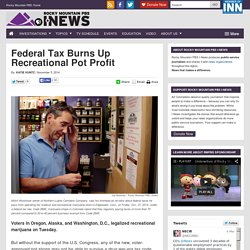 Under a federal tax law, Code 280E, marijuana shops in Colorado report that they regularly paying taxes of more than 70 percent compared to 30 to 40 percent business exempt from Code 280E. Voters in Oregon, Alaska, and Washington, D.C., legalized recreational marijuana on Tuesday. But without the support of the U.S.