Adam Grant: The surprising habits of original thinkers. The Human Brain - Steven Pinker. Here's what it's like to be married to a psychopath. James Fallon calls himself a "prosocial" psychopath. 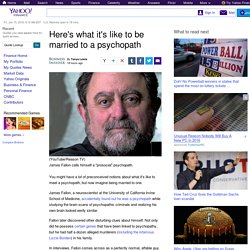 You might have a lot of preconceived notions about what it's like to meet a psychopath, but now imagine being married to one. James Fallon, a neuroscientist at the University of California Irvine School of Medicine, accidentally found out he was a psychopath while studying the brain scans of psychopathic criminals and realizing his own brain looked eerily similar. Fallon later discovered other disturbing clues about himself: Not only did he possess certain genes that have been linked to psychopathy, but he had half a dozen alleged murderers (including the infamous Lizzie Borden) in his family. Films On Demand - View Playlist. Extroversion, Introversion, and the Brain. Biology 1032002 Third PaperOn Serendip Natalya Krimgold The terms "extrovert" and "introvert" are often used to describe individuals' interpersonal relations, but what do these terms mean precisely, and is there a neurobiological basis for these personality traits? 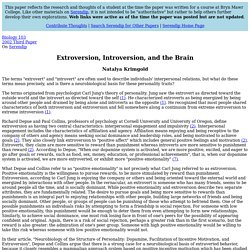 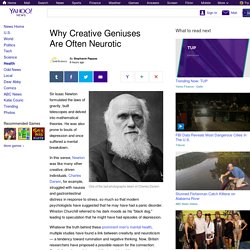 He was also prone to bouts of depression and once suffered a mental breakdown. In this sense, Newton was like many other creative, driven individuals. Charles Darwin, for example, struggled with nausea and gastrointestinal distress in response to stress, so much so that modern psychologists have suggested that he may have had a panic disorder. Winston Churchill referred to his dark moods as his "black dog," leading to speculation that he might have had episodes of depression. Whatever the truth behind these prominent men's mental health, multiple studies have found a link between creativity and neuroticism — a tendency toward rumination and negative thinking. 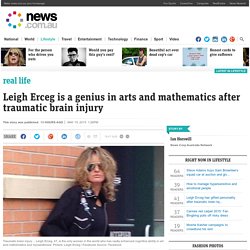 Leigh Erceg, 47, is the only woman in the world who has vastly enhanced cognitive ability in art and mathematics and 'synaesthesia'. Picture: Leigh Erceg / Facebook Source: Facebook A TRAUMATIC brain injury has given a woman a new personality and new skills. Brain Surgery To Remove Amygdala Leads To Woman's 'Hyper Empathy' By Bahar Gholipour, Staff Writer Published: 09/13/2013 07:47 AM EDT on LiveScience In a strange case, a woman developed "hyper empathy" after having a part of her brain called the amygdala removed in an effort to treat her severe epilepsy, according to a report of her case. 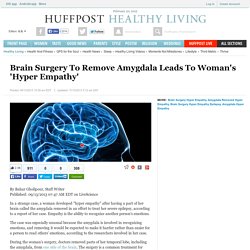 Empathy is the ability to recognize another person's emotions. The case was especially unusual because the amygdala is involved in recognizing emotions, and removing it would be expected to make it harder rather than easier for a person to read others' emotions, according to the researchers involved in her case. Teenager's film on having autism. Rebecca Saxe: How we read each other's minds. Existential Futility. Why Some Races Outperform Others. Tali Sharot: The optimism bias. At around minute 13, Tali Sharot describes how she and collaborator Dr Ryota Kanai were able to influence the outcome of experiments designed to test optimism bias by applying TMS (transcranial magnetic stimulation). 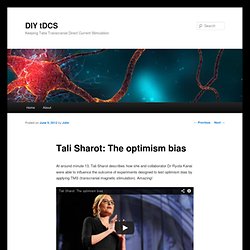 Best bipolar medicines for mania, depression, and mixed. My Brilliant Brain. Martin Seligman: The new era of positive psychology. Discovering Psychology. Highlighting major new developments in the field, this updated edition of Discovering Psychology offers high school and college students, and teachers of psychology at all levels, an overview of historic and current theories of human behavior. Stanford University professor and author Philip Zimbardo narrates as leading researchers, practitioners, and theorists probe the mysteries of the mind and body. Based on extensive investigation and authoritative scholarship, this introductory course in psychology features demonstrations, classic experiments and simulations, current research, documentary footage, and computer animation.

This three-pound organ is the seat of intelligence, interpreter of the senses, initiator of body movement, and controller of behavior. Lying in its bony shell and washed by protective fluid, the brain is the source of all the qualities that define our humanity. The brain is the crown jewel of the human body. For centuries, scientists and philosophers have been fascinated by the brain, but until recently they viewed the brain as nearly incomprehensible.