Interesting articles and videos that could be developed into stimulating lessons. Don't forget the response process!

Great Unsolved Mysteries in Canadian History. The Museum of Hoaxes. 5 American Words That Are Rude In Britain. Server Akua Agyemfra, forced to alter hair, says she just wants equality - Toronto. Octopus makes daring escape from aquarium to Pacific Ocean - Trending. An octopus named Inky escaped from his tank and made it to the Pacific Ocean, says the National Aquarium of New Zealand. 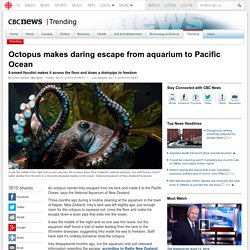 Three months ago during a routine cleaning at the aquarium in the town of Napier, New Zealand, Inky's tank was left slightly ajar, just enough room for the octopus to squeeze out, cross the floor and make his escape down a drain pipe that exits into the ocean. It was the middle of the night and no one saw him leave, but the aquarium staff found a trail of water leading from the tank to the 50-metre drainpipe, suggesting Inky made his way to freedom. Staff have said it's unlikely someone stole the octopus. Inky disappeared months ago, but the aquarium only just released information regarding the escape, according to Radio New Zealand. "He managed to make his way to one of the drain holes which go back to the ocean and off he went — and he didn't even leave us a message," Rob Yarrell, the aquarium's manager, told Radio New Zealand.

Ottawa restaurant's male servers get taste of workplace discrimination - Ottawa. This pretty much sums up the way men working at the Ottawa restaurant Union Local 613 felt about serving customers in short dresses and high heels on Wednesday night: Co-owner Matt Fantin squeezes past Tristan to get to the kitchen during service. 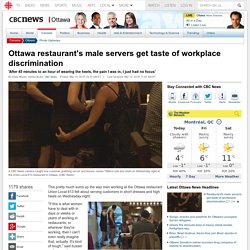 (CBC News) "If this is what women have to deal with in days or weeks or years of working in restaurants, or wherever they're working, then I can't even really imagine that, actually. Saving Sid. An unforgettable call The first friend or family member to hear the news was Shouvik Datta . 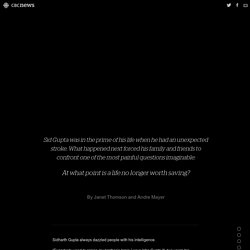 He has known Sid since their high school days in New Delhi, India, and has been in Canada since 2001. In 2011, Sid and his wife joined Shouvik in Toronto. (Sid's wife did not want to be named in this article.) After the couple separated in 2013, Sid rented a bachelor suite in Shouvik’s condominium building and the two old friends got into the habit of talking or texting daily. On the morning of Feb. 21, 2014, Shouvik got up, went to work and texted Sid around 8:30 a.m. The Anti-Nazi Teen Gang that Beat Up Hitler Youth and Danced to Jazz.

Animal-related. Social Media related. Short videos for lessons. TV Shows and Movies. 14 compliments that have nothing to do with looks and everything to do with being an amazing human. Photographer Documenting the Homeless Discovers Her Own Father Among Them. Honolulu, Hawaii-based photographer and law student Diana Kim can trace her love of photography back to her father, who used to own a photography studio on O'ahu. 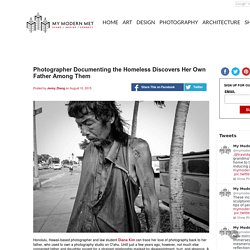 Until just a few years ago, however, not much else connected father and daughter except for a strained relationship marked by disappointment, hurt, and absence. A chance encounter brought the two back together again, sparking an extraordinarily moving journey of love and forgiveness in the face of mental illness, homelessness, and hardship.

"Some of the earliest memories I have of my father is of him giving me Ring Pop candies whenever my mother and I would visit him," Kim, 30, told NBC News. "I had an insatiable craving for sweets and he would go behind my mother's back and sneak me gummy bears and Ring Pops. " That was over 25 years ago, when their family was still together. Although Kim's project shaped much of her life and her decision to go to law school, the biggest impact came in 2012. All Emergency Food. A New Digital Exhibit Lets Users Write Captions About Unwitting London Pedestrians. A new digital art exhibit, Exhausting a Crowd, is a people-watcher’s dream. 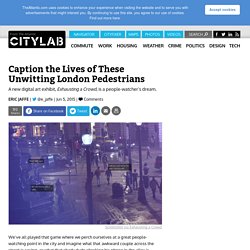 We’ve all played that game where we perch ourselves at a great people-watching point in the city and imagine what that awkward couple across the street is saying, or what that shady dude checking his phone in the alley is texting, or what that pigeon really thinks about humanity. Now you can play it online with a whole bunch of unwitting Londoners—quote bubbles and all.

The super fun digital installation is called Exhausting a Crowd, and it comes courtesy of tech-minded artist Kyle McDonald, who arranged it for a new exhibition on “the public realm and urban experience” at the Victoria and Albert Museum. High Tech v. Slow Food. Eat real food. 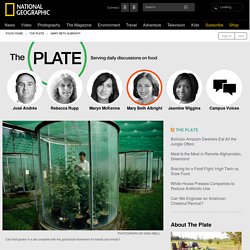 This is the advice of a thousand health advocates at a thousand typewriters in a thousand books. The problem is definitional: What is real food? When dumpster diving pays off — big time. A Silicon Valley recycling centre is still searching for a woman who dropped off a first-generation Apple computer thought to be worth $200,000 US. 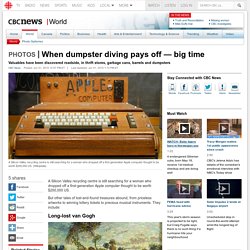 But other tales of lost-and-found treasures abound, from priceless artworks to winning lottery tickets to precious musical instruments. They include: Soup-slurping student sparks ban on food in exams at University of Waterloo - Kitchener-Waterloo. Thanks to a hungry student who brought a bowl of noodle soup to a final exam, the University of Waterloo senate has amended exam rules and banned students from bringing in food and water bottles with labels. 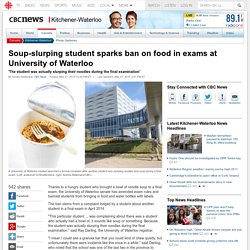 Bathroom design has much 'Room for Improvement' - Home. The sink in the central hall of Villa Savoye, built in 1958 and designed by Swiss architects Le Corbusier and his cousin Pierre Jeanneret. 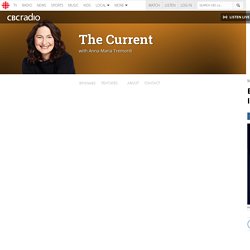 (Timothy Brown, Flickr cc) Bathroom design in most Canadian homes has hardly changed in a hundred years. And despite some noble attempts to re-imagine it.. it's surprisingly difficult for people to accept changes to the way bathrooms are designed. But many experts say it's time to take our lavatories into the 21st Century. Today as part of our series By Design, our producers Shannon Higgins and Kristin Nelson are exploring the the dirty little secret behind the design of one of the most intimate spaces in our homes. Illustrations of the Alexander Kira Bathroom Design. 3 Ways to Responsibly and Compassionately Respond to Panhandling. I’ve moved to the other side of the street to avoid it. 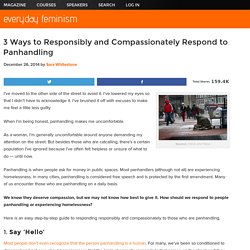 I’ve lowered my eyes so that I didn’t have to acknowledge it. I’ve brushed it off with excuses to make me feel a little less guilty. When I’m being honest, panhandling makes me uncomfortable. As a woman, I’m generally uncomfortable around anyone demanding my attention on the street. Winnipeg woman caught up in international sex assault investigation - Manitoba. A Winnipeg woman is part of an international investigation into an Italian military police officer who allegedly drugged and sexually assaulted some of the women he connected with on the popular online travel website couchsurfing.com. Dino Maglio, 36, has been charged with raping a 16-year-old girl from Australia.

That case will go to trial next month in Padua, Italy. Meanwhile, nine other women have provided statements about Maglio to journalists at the Investigative Reporting Project Italy. India Grows, Canada Disappears: Mapping Countries By Population : Goats and Soda. Can you find Australia and Canada? The cartogram, made by Reddit user TeaDranks, scales each country's geographic area by its population. Organ donation ethics: How health-care workers decide who gets a transplant - Health. With organs a scarce commodity for the many patients needing transplants, doctors are forced into making tough decisions that sometimes determine who gets to live.

"Telling someone that they're not a candidate for a transplant is, in some cases, is denying them a life-saving therapy," says Steven Paraskevas, president of the Canadian Society of Transplantation and a transplant surgeon at McGill University Health Centre. "And that is one of the most difficult issues, I think, that physicians have to wrestle with in our field.

" Each year, more than 1,600 Canadians' names are added to transplant wait lists, according to the Canadian Transplant Society. Eugenie Bouchard asked to 'twirl' by on-court presenter - CBC Sports - Tennis. Eugenie Bouchard's jaw dropped a little and her eyes went wide when the male presenter conducting her on-court interview at the Australian Open made an unusual request: "Can you give us a twirl? " "A twirl? " the 20-year-old Canadian asked. Art for Kids Hub. Students Learn A Powerful Lesson About Privilege. The Top 14 Student Activism Stories of The Year. Share A core mission of StudentNation is to highlight the frequent but often overlooked instances of student and youth engagement with critical political, economic and cultural questions. This round-up below offers an incomplete but illustrative survey of the scope and breadth of student activism currently. Believe it or not, this is the best time to be alive. Nevada Bill Proposes Driver's License Suspension For Low-Performing Students.

Anchor Tracey Spicer ditches makeup to protest 'extreme grooming' Tracey Spicer did the math and realized she was spending between $500 a month and countless hours a year on basic grooming. ‘I noticed you left your lights on’: Edmonton Good Samaritan’s note goes viral. The problem with #slacktivism. AFP Photo. Pornography, kids and sex education: what to do? - Health. More kids at ever younger ages are accessing pornography online, according to a range of studies, but there's not much consensus about what, if anything, should be done by parents or teachers to address the issue. Edward O. Wilson on what aliens will look like and why. Malaysia Airlines' "Bucket List" and six other memorable marketing blunders. Microbiome: Unique bacterial cloud follows you everywhere. How to keep your private photos from running wild on the web.

25 Of The Most Dangerous And Unusual Journeys To School In The World. Uzi gun death accident exposes debate about children and guns. A 16-Year-Old Kid In Ferguson Says More With A Marker And A Piece Of Paper Than All The Media Did. Learning Resources. Four Years Of 'This I Believe' Chicago Homeless People as Hotspots? Tattoo removal business booming as inked teens grow up. Community gardens ripped up along Arbutus corridor. Dying Sierra Leone Dr. Sheik Umar Khan never told Ebola drug was available - Health. Derek Jeter's head profiled in New Jersey corn maze - CBC Sports - Baseball - MLB.

Kilobots robot swarm coordinates to form shapes. Real Transformers? Self-assembling paper robots invented. Readers_theater_sources.pdf. PTSD clues gleaned from passengers on terrifying flight - Health. Robin Williams has a tickle fight with Gorilla. [VIDEO] Risk-Glorifying Video Games Increase Deviant Behaviors in Some Teens. Rosetta arrives at comet destination. A Murphy Bed Is A Thing You Don't Know You Need ... Here's An Apartment With 3 Of Them. The Scientific Reason Why Wearing Certain Clothes Can Make You More Artistic. Live Through This with Andrew Kauffman. Eating disorder patient seeks $60K online for health care - Health. 5 Minutes Of What The Media Actually Does To Women.