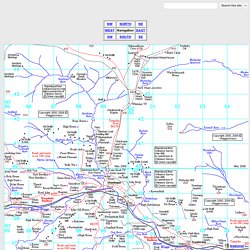 Image reproduced with kind permission of Ordnance Survey and Ordnance Survey of Northern Ireland. Please observe the COPYRIGHT of this website. Printing and copying should be for personal use only and NOT for commercial purposes. Waggonways Home Page Placenames in maptile NY9540. Plashetts Colliery Waggonway. Local area Top. 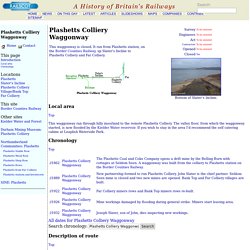 Corkickle Brake - Gordon Nicholsons Pictures. The Caldon Low Tramroads. The Caldon Canal is named after the village of Caldon (or Cauldon) but doesn't go within three miles of it. 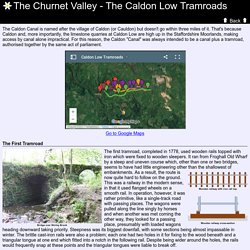 That's because Caldon and, more importantly, the limestone quarries at Caldon Low are high up in the Staffordshire Moorlands, making access by canal alone impractical. For this reason, the Caldon "Canal" was always intended to be a canal plus a tramroad, authorised together by the same act of parliament. The First Tramroad The first tramroad, completed in 1778, used wooden rails topped with iron which were fixed to wooden sleepers. It ran from Froghall Old Wharf by a steep and uneven course which, other than one or two bridges, seems to have had little engineering other than the shallowest of embankments. Wooden railway with iron rail top. Glasgow, Cowlairs Incline. NS56NE 1866.00 c. 59276 65773 to c. 6009 6774 Extends into map sheet NS66NW. 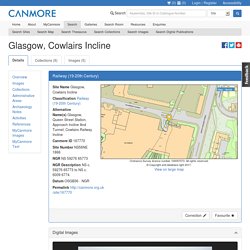 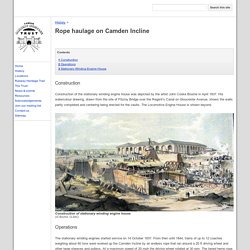 His watercolour drawing, drawn from the site of Fitzroy Bridge over the Regent’s Canal on Gloucester Avenue, shows the walls partly completed and centering being erected for the vaults. The Locomotive Engine House is shown beyond. Construction of stationary winding engine house(JC Bourne, CLSAC) Operations. Railway inclines. As well as at Wilminstone Quarry (see last issue) and Lee Moor. 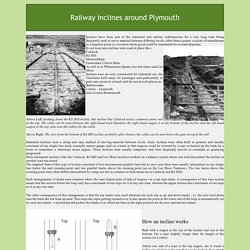 Inclines were no only constructed for industrial use, the Victorians built many for passenger uses particularly to gain easy access to a beach and the sea at such places as:- Admiralty Incline Railway - The Encyclopedia of Portland History. Durham Railway Scenes - Hetton Colliery Railway - Gallery 1. Clee Hill Incline. This group of slides really caught my attention. 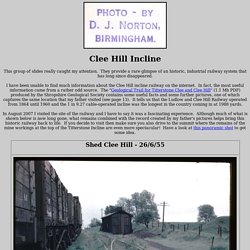 They provide a rare glimpse of an historic, industrial railway system that has long since disappeared. I have been unable to find much information about the Clee Hill incline railway on the internet. In fact, the most useful information came from a rather odd source. The "Geological Trail for Titterstone Clee and Clee Hill" (1.1 Mb PDF) produced by the Shropshire Geological Society contains some useful facts and some further pictures, one of which captures the same location that my father visited (see page 13). 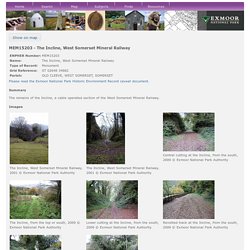 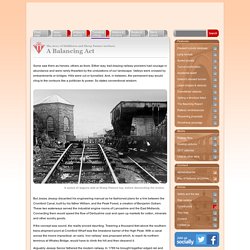 Shunts here, run-arounds there. Quarry loads to marshal and weigh. Crippled wagons to sort. Swannington Incline, Leicester & Swannington Railway, Robert and George Stephenson. A Personal History. A History of Me Next In the mid-1960s, I took a series of photos of the remains of the railway that ran from Dundee to Newtyle. 40 years later, I trawled the internet and compiled an account into which I inserted my photos, etc. 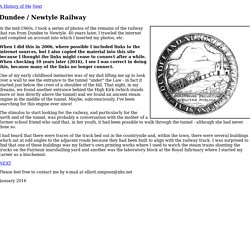 When I did this in 2006, where possible I included links to the internet sources, but I also copied the material into this site because I thought the links might cease to connect after a while. When checking 10 years later (2016), I see I was correct in doing this, because many of the links no longer connect. The Ingleby Incline. Ingleby Incline was a self acting incline allowing ore laden wagons to be lowered down from the top of the moor whilst pulling up empty wagons from the Battersby level. The gradient averaged 1 in 5.5 and was 1 in 5 at its steepest. It was 1430 yards long and ran from a lower elevation of about 600 feet to the moor top at an elevation of 1370 feet.

The operation of the incline involved a set of four loaded wagons weighing 52 tons in total, being attached to a 1 inch diameter wire cable, wound around a 14 feet diameter drum, housed in a large stone-constructed Drum House. The World's Only Standard Gauge Cable Railway.