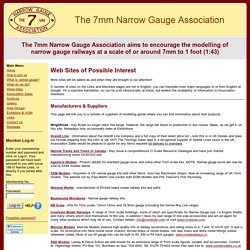 A number of sites on the Links and Members pages are not in English. you can translate most major languages to or from English at Google. It's a machine translation, so can be a bit idiosyncratic at times, but widens the availability of information to Association members. Manufacturers & Suppliers. Narrow gauge 7mm locos - Quality Model Railway Kits. EDM-Loco. Hunslets. Baby Hunslet Project What is a baby Hunslet? 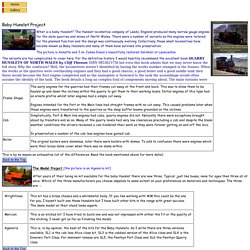 The Hunslet locomotive company of Leeds, England produced many narrow gauge engines for the slate quarries and mines of North Wales. There were a number of variants as the engines were tailored for the planned function and the design was continuously evolving. Collectively these small locomotives have become known as Baby Hunslets and many of them have survived into preservation.

The picture is Annette and I on James Evans's beautifully restored Velinheli at Launceston. The variants are too complicated to cover here. This is by no means an exhaustive list of the differences. The Model Project [the picture is an Agenoria kit] After years of their being no kit available for the baby Hunslet there are now three.

This Project - The Agenoria Hunslet The standard kit is excellent and many have been successfully built looking good and operating smoothly. EDM Models Modifications The targets for my improvements were: - The Chassis. Slater's Plastikard - 16mm Narrow Gauge Locomotive Kits. FR Loco. Production Note - Loco's These kits are resin cast bodies with cast metal, etched and turned detail parts. 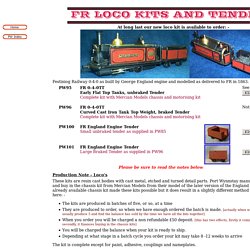 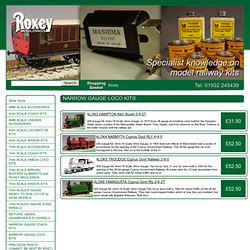 In 1915 three 2ft gauge locomotives were built for the Hampton Water works system of the Metropolitan Water Board. They hauled coal from wharves on the River Thames to the boiler houses until the railway wa. LED13 - Headlight, firebox, lantern, coach mix of. Tail & coach lighting. LED's shown on the coaches have been painted white. 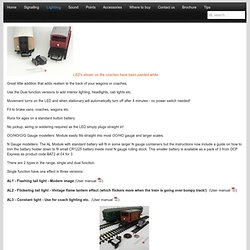 Great little addition that adds realism to the back of your wagons or coaches. Use the Dual function versions to add interior lighting, headlights, cab lights etc. Movement turns on the LED and when stationary will automatically turn off after 4 minutes - no power switch needed! Fit to brake vans, coaches, wagons etc. Runs for ages on a standard button battery. No pickup, wiring or soldering required as the LED simply plugs straight in! 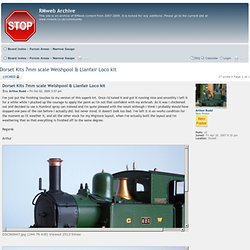 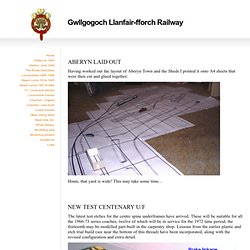 Apart from the roof, most of this coach was assembled by about 1985 and then left unfinished. I was going to replace it with their new retooled version, however that failed to materialise as they decided they could still get more out of the old tools. So, no moulded roof, then. Though I suspect it will eventually be replaced, I thought I may as well put a roof on it so it could be used in the meantime. I made a false ceiling with a central spine support to stop any possible sagging, both in plastic card, and a couple of folded strips of cardboard to glue the rolled cardboard (cereal packet) roof onto. It already had old transfers on (GLR 101) but the number was wrong. SLIMRAILS. 7mm O-16.5 Quarry Hunslet built from the Peco kit running on a Hornby chassie. Scale Link Ltd Narrow Gauge (60cm) Railway.

0-16.5 TR No6 Douglas - Narrow Gauge Modelling & Prototype - RMweb. I've been dabbling with 00 gauge for the best part of 40 years, modifying locos and coaches, all with intention of building a "super layout". 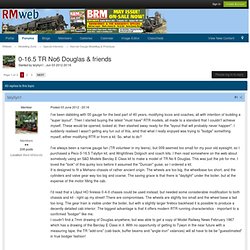 Then I started buying the latest "must have" RTR models, all made to a standard that I couldn't achieve myself. These would be opened, looked at, then stashed away ready for the "layout that will probably never happen". Abergynolwyn Construction. Building Dolgoch Evaluation Having finished the main baseboard structure, I thought it might be a good idea to built a loco to test the track before I started laying any. 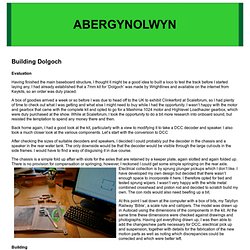 New Railway Modellers Forums. A number of people have spoken to me recently, mentioning that the catalogues available for 009 locos have no pictures. 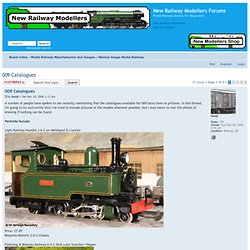 In this thread, I'm going to try and rectify this! I've tried to include pictures of the models wherever possible, but I may resort to real life photos of drawing if nothing can be found. Parkside Dundas. Parkside Dundas - Quality Fine Scale Models. The Scalefour Society - Alan Gibson Workshop. Locomotive Wheels Steam locomotive driving, bogie and tender wheels. Diesel/electric locomotive driving and bogie wheels. My extensive range of locomotive driving, bogie and tender wheels has been carefully selected to meet the needs of most modellers and although each wheel has been scaled from a specific prototype many will be found to be representative of numerous other types.

On average the tyre on a prototype wheel was allowed to wear to -2½" of its nominal diameter before being replaced and in selecting the range of tyre diameters I have taken this wear factor into account. Modellers can, therefore, confidently choose a wheel whose diameter is within 2½ " of the prototype's stated size in the almost certain knowledge that it was in that condition some time during its life. Peco 0-16.5 Locomotive Kits.