High Altitude Balloons by TheHabLab. Buoyancy: helium vs hydrogen balloons. Balloons are buoyant because the air pushes on them. 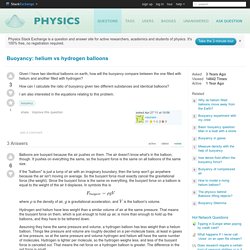 The air doesn't know what's in the balloon, though. It pushes on everything the same, so the buoyant force is the same on all balloons of the same size. If the "balloon" is just a lump of air with an imaginary boundary, then the lump won't go anywhere because the air isn't moving on average.

High altitude radio comms. Dave Akerman. On Sunday, with great help from some friends, I successfully launched and retrieved the balloon, recovering complete video footage of the entire flight. 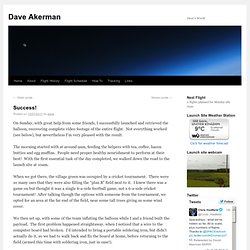 Not everything worked (see below), but nevertheless I’m very pleased with the result. The morning started with at around 9am, feeding the helpers with tea, coffee, bacon butties and egg muffins. People need proper healthy nourishment to perform at their best! With the first essential task of the day completed, we walked down the road to the launch site at 10am. When we got there, the village green was occupied by a cricket tournament. We then set up, with some of the team inflating the balloon while I and a friend built the payload. So, the payload was then built up with cameras set up and installed first, and the computer, GPS and batteries installed afterwards. In the panic I forgot to check that the backup tracker – a GPS/GSM module – was working.

I then remembered that I’d not checked the backup tracker. All around us were trees. GPS Telemetry. This comes about as a project I've had in my mind for several years now. 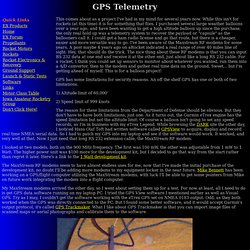 While this isn't for rockets (at this time) it is for something that flies. I purchased several large weather balloons over a year ago, and have been wanting to get a high altitude balloon up since the purchase, the only real hold up was a telemetry system to recover the payload or "capsule" as the ballooners call it. I could get a ham radio license and go that route, but there is a cheaper, easier and more versatile way to go. 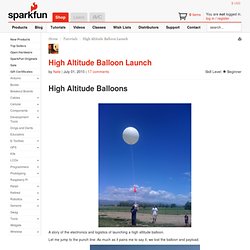 Let me jump to the punch line: As much as it pains me to say it, we lost the balloon and payload. There's a box of electronics sitting out there in eastern Colorado right now. This is the story of a balloon, a parachute, and a box full of electronics. The following files are open source design files and firmware available free of charge. Downloads: Why? Why would someone want to do this? But in failure, steal other people's work! Who wouldn't want to do something like this? So that's the idea, build a payload with a lot of sensor, get a camera taking a bunch of pictures, include a GPS with transmitter for location and tracking, fill up a balloon, and release! High Altitude Science – Welcome. General:beginners_guide_to_high_altitude_ballooning [UKHAS Wiki] General:beginners_guide_to_high_altitude_ballooning How to get involved High Altitude Ballooning isn't an easy hobby! 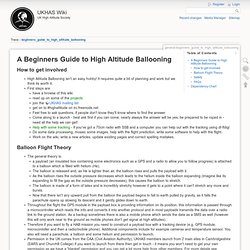 It requires quite a bit of planning and work but we think its worth it. First steps are: have a browse of this wiki get on to #highaltitude on irc.freenode.net Feel free to ask questions, if people don't know they'll know where to find the answer. Come along to a launch - best ask first if you can come, nearly always the answer will be yes, be prepared to be roped in - need all the help we can get! Balloon Flight Theory The general theory is: a payload (an insulated box containing some electronics such as a GPS and a radio to allow you to follow progress) is attached to a balloon which is filled with helium (He). Safety The key to High Altitude Ballooning is to try to be as safe as possible at all times.