Accucraft October News. This month we are able to bring you a breaking story from Australia, including the announcement of two new 1:32 scale live steam engines. 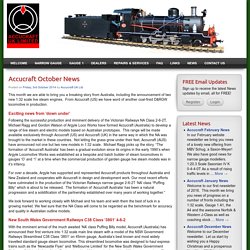 From Accucraft (US) we have word of another coal-fired D&RGW locomotive in production. Exciting news from ‘down under’ Following the successful production and imminent delivery of the Victorian Railways NA Class 2-6-2T, Michael Ragg and Gordon Watson of Argyle Loco Works have formed Accucraft (Australia) to develop a range of live steam and electric models based on Australian prototypes. This range will be made available exclusively through Accucraft (US) and Accucraft (UK) in the same way in which the NA was brought to the market in these countries. Not letting the grass grow under their feet, Accucraft (AUS) have announced not one but two new models in 1:32 scale. For over a decade, Argyle has supported and represented Accucraft products throughout Australia and New Zealand and cooperates with Accucraft in design and development work.

Specifications: History Of The Climax Locomotive. NOTE: The links contained in the text on this page point to images with examples pertaining to the topic being discussed. 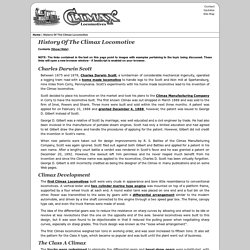 These links will open a new browser window - if JavaScript is enabled on your browser. Charles Darwin Scott Between 1875 and 1878, Charles Darwin Scott, a lumberman of considerable mechanical ingenuity, operated a logging tram road with a home made locomotive to handle logs to the Scott and Akin mill at Spartansburg, nine miles from Corry, Pennsylvania. Scott’s experiments with his home made locomotive lead to his invention of the Climax locomotive. Scott decided to place his locomotive on the market and took his plans to the Climax Manufacturing Company in Corry to have the locomotive built.

George D. When new patents were taken out for design improvements by R. De Winton Boiler. The De Winton Boiler(by Colin Binnie) A DeWinton boiler is small and if kept simple has a single but rather short vertical centre flue up which the hot gases from the burner pass. 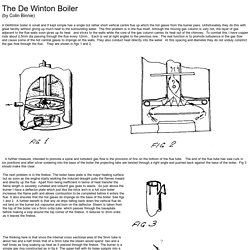 Unfortunately they do this with great facility without giving up much heat to the surrounding water. The first problem is in the flue itself. Athough the moving gas column is very hot, the layer of gas adjacent to the flue walls soon gives up its heat and sticks to the walls while the core of the gas column carries its heat out of the chimney. To combat this I have copper rods about 2,5mm dia passing through the flue every 12mm.. A further measure, intended to promote a spiral and turbulent gas flow is the provision of fins on the bottom of the flue tube.

Keith's project 2. Keith Parkinson's Class "A" Climax Having built several locos with conventional boilers, cylinders and valve gear, I wanted something substantially different, so my thoughts turned to the Class “A” Climax. 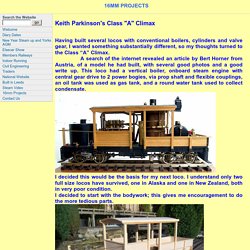 A search of the internet revealed an article by Bert Horner from Austria, of a model he had built, with several good photos and a good write up. This loco had a vertical boiler, onboard steam engine with central gear drive to 2 power bogies, via prop shaft and flexible couplings, an oil tank was used as gas tank, and a round water tank used to collect condensate. I decided this would be the basis for my next loco. I understand only two full size locos have survived, one in Alaska and one in New Zealand, both in very poor condition. Locomotive Gallery. I have always had a soft spot for American industrial geared engines. 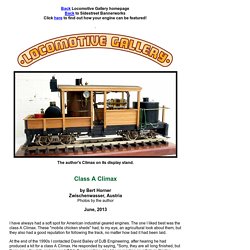 The one I liked best was the class A Climax. These "mobile chicken sheds" had, to my eye, an agricultural look about them, but they also had a good reputation for following the track, no matter how bad it had been laid. At the end of the 1990s I contacted David Bailey of DJB Engineering, after hearing he had produced a kit for a class A Climax. He responded by saying, "Sorry, they are all long finished, but there are a few bits and pieces left. " In the meantime, I had been reading an article in Garden Railways that included a drawing of a class A by the late Al Armitage. No drawings were left after the Climax company closed. I set about building my chassis using the same materials as the prototype, largely wood, as far as was practical. I had a vertical boiler laying around in the workshop, which came from a project that had been shelved for some time, so this was used instead of the T-boiler shown in my drawing.