Ian Michael Smith's Photostream. DailyZen in GeekTool. I have been playing with GeekTool the last few days. 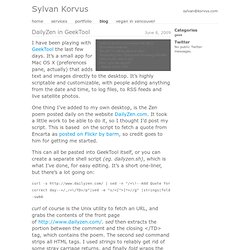 It’s a small app for Mac OS X (preferences pane, actually) that adds text and images directly to the desktop. It’s highly scriptable and customizable, with people adding anything from the date and time, to log files, to RSS feeds and live satellite photos. One thing I’ve added to my own desktop, is the Zen poem posted daily on the website DailyZen.com. It took a little work to be able to do it, so I thought I’d post my script. This is based on the script to fetch a quote from Encarta as posted on Flickr by barm, so credit goes to him for getting me started. This can all be pasted into GeekTool itself, or you can create a separate shell script (eg. dailyzen.sh), which is what I’ve done, for easy editing. Curl -s | sed -n "/<\! Curl of course is the Unix utility to fetch an URL, and grabs the contents of the front page of sed then extracts the portion between the comment and the closing </TD> tag, which contains the poem.

Alpha: Computational Knowledge Engine. Stack Overflow. Detox My Mac for Mac. Fonts matching 'space' Make Your Desktop Come Alive with GeekTool. This post is part of a series that revisits some of our readers’ favorite articles from the past that still contain awesome and relevant information that you might find useful. 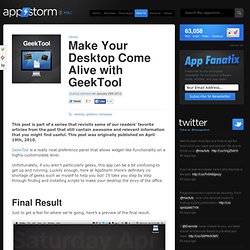 This post was originally published on April 19th, 2010. GeekTool is a really neat preference panel that allows widget-like functionality on a highly customizable level. Unfortunately, if you aren’t particularly geeky, this app can be a bit confusing to get up and running. Luckily enough, here at AppStorm there’s definitely no shortage of geeks such as myself to help you out! I’ll take you step by step through finding and installing scripts to make your desktop the envy of the office. Final Result Just to get a feel for where we’re going, here’s a preview of the final result. 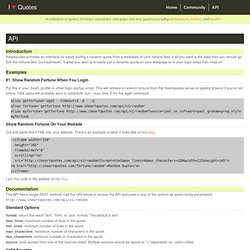 If all you want is the data then you should go find the fortune files (try freshmeat). Desktop Quotes Geeklet. ImageMagick: Convert, Edit, Or Compose Bitmap Images. GeekTool: Circle CPU Monitor. CPU Circle Monitor Script and Font The following script is a component geeklet from the GeekTool: Cloud Setup Tutorial and has now been added into the GeekTool Script Vault. There are two files listed here for download, the font download is necessary for setting up the geeklet. Below is what the finished product could look like. As an accompaniment, I recommend that you download Bowtie (an iTunes player app) or iTunesGeeklet 2.0 and incorporate one of them into your setup.

I’ve provided a picture at the bottom that incorporates Bowtie into the overall set up. Rainmeter desktop. The Lifehacker Desktop Show and Tell Pool. Gothic Century by ~Chaebi69 on deviantART. Your Quotes. Mega Roundup of Geektool scripts + inspiration gallery. 5 Ways to Make Your Mac’s Desktop Better with GeekTool. 10 Beautiful Elegant Replacement Docks for your Mac. Downloads - blacktree-nocturne - A screen inversion tool - switch your colors to Night Mode. Hd boheh beach photos. Glass. Over 46 Powerful Geeklets and Scripts for the Geek Within You. GeekTool is a small, yet remarkably powerful application that some neglect because of it’s steep learning curve. 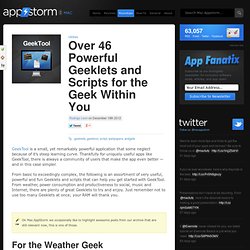 Thankfully for uniquely useful apps like GeekTool, there is always a community of users that make the app even better — and in this case simpler. From basic to exceedingly complex, the following is an assortment of very useful, powerful and fun Geeklets and scripts that can help you get started with GeekTool. From weather, power consumption and productiveness to social, music and Internet, there are plenty of great Geeklets to try and enjoy.

My Desktop Setup - KISS.ME.GOMEZ. I recently wrote a small script to change the wallpaper as the time of day changes. anyways, the script checks the computer time, changes it to a 24hr type digit. then references a folder of images for a matching image name. install instructions, make a folder in your home folder/ picture/ called wallpaper save the scpt file there, and then find images you want to use for your backgrounds. rename them as (hours)--2.jpg example noon ( 12:00 ) would be 12--2.jpg example 6pm (18:00) would be 18--2.jpg and so on, you can make 24images if you want. improve on, modify, the script all you want. its very simple right now. 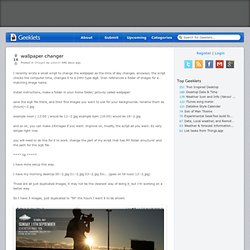 How To Customize Your Desktop with GeekTool. Posted 05/05/2011 at 2:00pm | by Cory Bohon GeekTool is an application that allows you to not only customize your desktop in Mac OS X, but also display any Terminal output right on your desktop. 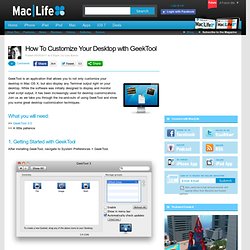 While the software was initially designed to display and monitor shell script output, it has been increasingly used for desktop customizations.