Makerspaces in the Library

Pipe Cleaner ChallengeHousing a Forest. We spent a wonderful weekend at the cabin with some special friends. 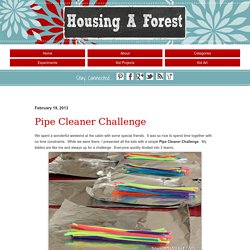 It was so nice to spend time together with no time constraints. While we were there, I presented all the kids with a simple Pipe Cleaner Challenge. My kiddos are like me and always up for a challenge. Everyone quickly divided into 3 teams. I handed each of the teams 2 basic items…the same amount of tin foil and pipe cleaners. Crafts don’t need to be extravagant or even use every supply in our cupboard. Tinfoil is a fun creative tool for kids to play with. This beautiful castle was created from our youngest team. Raftbayarea. Raftbayarea. Hovercraft - 10 Pack. An uplifting activity based on air pressure! 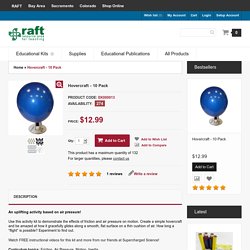 A Librarian's Guide to Makerspaces: 16 Resources. Makerspaces, sometimes also referred to as hackerspaces, hackspaces, and fablabs are creative, DIY spaces where people can gather to create, invent, and learn.

In libraries they often have 3D printers, software, electronics, craft and hardware supplies and tools, and more. Here are some excellent resources for anyone thinking about setting up a makerspace in their organization. Articles & Blog Posts Libraries, Hackspaces and E-waste: how libraries can be the hub of a young maker revolution “…there’s another gang of information-literate people out there, a gang who are a natural ally of libraries and librarians: the maker movement. Clustered in co-operative workshops called “makerspaces” or “hack(er)spaces,” makers build physical stuff.

What is a Makerspace? From Stacks to Hacks: Makerspaces and LibraryBox The makerspace movement is gaining momentum in the library world. Events Maker Faire Events The Maker Faire is a festival of invention and celebration of the Maker movement. Celebrate National Library Week 2015 (April 12-18, 2015) with the theme "Unlimited possibilities @ your library®. 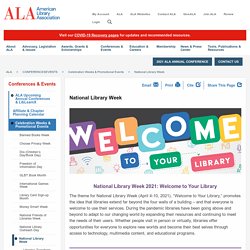 " First sponsored in 1958, National Library Week is a national observance sponsored by the American Library Association (ALA) and libraries across the country each April. It is a time to celebrate the contributions of our nation's libraries and librarians and to promote library use and support. All types of libraries - school, public, academic and special - participate. Library as Incubator Project. Learning with The Labs: professional development for all staff We’ve been documenting the evolution of The Labs at Carnegie Library of Pittsburgh since 2012, when the project had just secured a pilot grant. 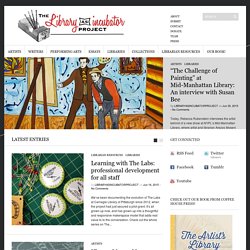 It’s all grown up now, and has grown up into a thoughtful and responsive makerspace model that adds real value to to the conversation. Check out the whole series on The... Ulysses Mapped by Leopold’s Day This post was originally published June 2012. Make It @ Your Library. How to make an origami corner heart bookmark. Dinosaur Timeline. Where the Magic Happens: library maker programs. Students at Monticello High School in Charlottesville, VA, built a“Frankenwii” from three broken Wiis soldered together to be functional.Photo courtesy of Monticello High School Library Last fall, high school librarian IdaMae Craddock got an unusual call from someone at Randolph College in Lynchburg, VA. 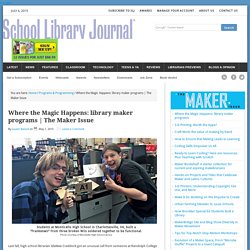 The college was piecing together a human skeleton that had been found in the dorms during summer cleaning. Reportedly missing from the science department since the 1970s, the skeleton was being used as a mascot by a secret society on campus. The Lynchburg official asked Craddock if her students would help them out by creating 3-D scans of the teeth, a task that built on some of the things they’d done in their school maker space the previous year. They had hacked an Xbox to generate 3-D images, usually scanning faces and heads—even Craddock’s.

“This year, [they did] some real work with it,” says Craddock, who works at Monticello High School in Charlottesville, VA. No space required. TechBits: Makerspaces and 3D printing. Maker spaces Archives. Library Makerspaces. Txla-makerspace-list.pdf. Makerspace Starter Kit. The hot new Makerspace Movement is NOT new to Murray Hill Middle School.

Eighteen years ago we designed and opened the school with the idea that we would have creation labs in the Media Center, GT room, and the TV studio. We started with video production, iMovie, Specular LogoMotion, Hyperstudio, and animation with Hollyood High kids. Here's an example of an EARLY (2003) video production called Bookfellas, featuring some Guy Ritchie-esque film direction techniques.

These kids are now all grown up and we've kept evolving, too! It's OK to Start Small! I re-purposed some of my empty study carrels for this Makerspace center at the top corner of our library. As I asserted in a recent blog post about new Ed Tech trends, fads, & tech -you can start small and You Don't Have to Marry It! For the Duct Tape Craft Cubby, I used a spring loaded curtain rod to hold the duct tape rolls, bought a bright blue colored shower caddy for the scissors and other tools.

A Librarian's Guide to Makerspaces: 16 Resources. Make It @ Your Library.