134.pdf. How To Make A Catapult. Did you miss the previous post on How To Work With Cardboard? 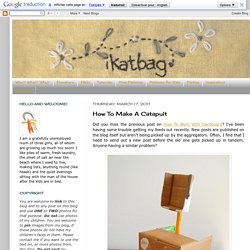 I've been having some trouble getting my feeds out recently. New posts are published on the blog itself but aren't being picked up by the aggregators. Often, I find that I need to send out a new post before the old one gets picked up in tandem. Anyone having a similar problem? Anyway, today we're going to build a cardboard catapult. What you need: Sturdy box (does not need to have a lid)Thick, strong rubberbandPencil or short dowelMatchbox, or small shallow boxToothpicksin addition to the usual tools and things for working with cardboard: masking tape, scissors, craft knife.Step 1Make the basket.

Step 2 Tape the basket onto one end of the pencil. Step 3 If the box has a lid, remove it. Stand it up tall as shown. Make two cuts in the top of the box, beginning with the open face, and cutting half way to the other side (this will be clearer in the next step). Step 4 Fold down the flap released by the two cuts you made in Step 3. Step 5. Elasticity and energy conversion in fleas, catapults, and bows - Part 2 - from FT Exploring. The catapults shown below were used by the Greeks and Romans. 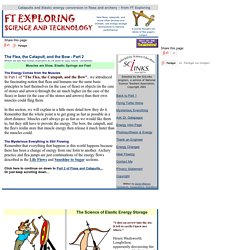 They were complicated and required a lot of experimentation and skill to develop. The type of catapults shown here were very efficient. Almost all of the energy put into the tendon springs was converted into the kinetic energy of the ball or spear. The catapults below are shooting stones. Rubber is an elastic material Warning: Do not try this at home. Contact Me Sometimes they threw big spears, sometimes they threw stones. Raftbayarea.

Kids Crafts & Activities for Children. Catapults.pdf. Weekend Project: Ping Ponger (PDF) Catapults! Summary Students observe the relationship between the angle of a catapult (a force measurement) and the flight of a cotton ball. 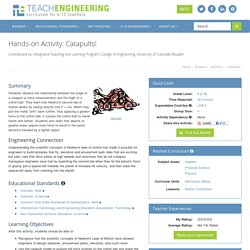 They learn how Newton's second law of motion works by seeing directly that F = ma. When they pull the metal "arm" back further, thus applying a greater force to the cotton ball, it causes the cotton ball to travel faster and farther. Students also learn that objects of greater mass require more force to result in the same distance traveled by a lighter object. Engineering Connection Understanding the scientific concepts of Newton's laws of motion has made it possible for engineers to build airplanes that fly, elevators and amusement park rides that are exciting but safe, cars that drive safely at high speeds and structures that do not collapse.

Educational Standards Each TeachEngineering lesson or activity is correlated to one or more K-12 science, technology, engineering or math (STEM) educational standards. Learning Objectives Materials List For each group: 15 Easy Catapults to Make With Kids. How to Build a Water Balloon Launcher. A water balloon launcher is a great project for a hot day! 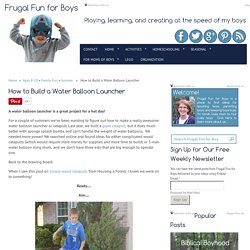 For a couple of summers we’ve been wanting to figure out how to make a really awesome water balloon launcher or catapult. Last year, we built a great catapult, but it does much better with sponge splash bombs and can’t handle the weight of water balloons. We needed more power! We searched online and found ideas for either complicated wood catapults (which would require more money for supplies and more time to build) or 3-man water balloon sling shots, and we don’t have three kids that are big enough to operate one. Back to the drawing board. When I saw this post on simple wood catapults from Housing a Forest, I knew we were on to something! Ready… Aim… Fire! (Yes, those photos are not of the same launch – notice the balloon changing colors?

How to Make a Trebuchet. How To Make A Catapult. How-to-build-a-popsicle-stick-catapult.doc. Popsicle catapult - search Instructables. How to Make a Mouse Trap Catapult. It is amazing how powerful this little catapult is. 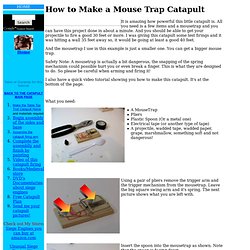 All you need is a few items and a mousetrap and you can have this project done in about a minute. And you should be able to get your projectile to fire a good 30 feet or more. I was giving this catapult some test firings and it was hitting a wall 35 feet away so, it would be going at least a good 40 feet. And the mousetrap I use in this example is just a smaller one. You can get a bigger mouse trap. Safety Note: A mousetrap is actually a bit dangerous, the snapping of the spring mechanism could possible hurt you or even break a finger. How to Make a Mousetrap Catapult - SonicDad Project #44. Mousetrap Catapult. You are purchasing the Downloadable PDF Project Instructions & Templates for: Project #44, Mousetrap Catapult for $5.99 *PDF instructions will be emailed to the address you specify here. 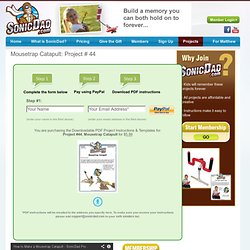 To make sure you receive your instructions please add support@sonicdad.com to your safe senders list. The Mousetrap Catapult is fun for ages four and up. Using a mousetrap for the spring, this catapult is designed to throw objects such as practice golf balls, paper balls, or marshmallows.