Drum Beats – OnlineDrummer.com. Free percussion sheet music. Drum tuning and heads. PRACTICE. Clayton Cameron: Brushworks - The DVD: Clayton Cameron: Movies & TV. Carpal Tunnel Relief for Musicians. Carpal tunnel syndrome is a condition in which there is pressure on the median nerve—the nerve in the wrist that supplies feeling and movement to parts of the hand. 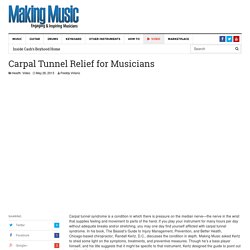 If you play your instrument for many hours per day without adequate breaks and/or stretching, you may one day find yourself afflicted with carpal tunnel syndrome. In his book, The Bassist’s Guide to Injury Management, Prevention, and Better Health, Chicago-based chiropractor, Randall Kertz, D.C., discusses the condition in depth. Making Music asked Kertz to shed some light on the symptoms, treatments, and preventive measures. 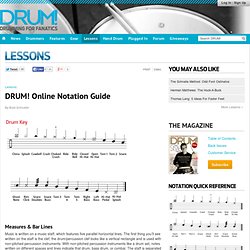 The first thing you’ll see written on the staff is the clef; the drum/percussion clef looks like a vertical rectangle and is used with non-pitched percussion instruments. With non-pitched percussion instruments like a drum set, notes written on different spaces and lines indicate that drum, bass drum, or cymbal. The staff is separated into individual measures (or bars) of music with thin vertical lines called bar lines. The number of beats in each measure is determined by the time signature.

Triplets As we go from larger notes down the list to the smaller notes, the notes and rests are halved in length. Time Signatures Time signatures are written like fractions. Dotted Notes & Rests Sometimes you’ll see a note or a rest with a small dot written next to it. Note & Rest Values Notes and rests come in different lengths, which are written as fractions. Repeats & Counting Rhythms. The Drummer's Journal. The Black Page. The Chacarera is a groove from northeast Argentina, especially Santiago del Estero. 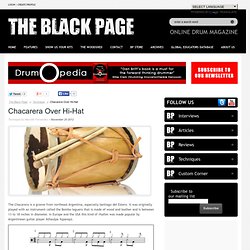 It was originally played with an instrument called the Bombo leguero that is made of wood and leather and is between 13 to 18 inches in diameter. In Europe and the USA this kind of rhythm was made popular by Argentinean guitar player Athaulpa Yupanqui. Comments. Drums. 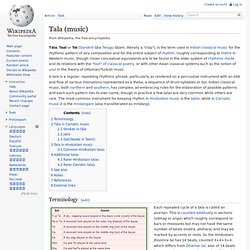 Indian classical music, both northern and southern, has complex, all-embracing rules for the elaboration of possible patterns and each such pattern has its own name, though in practice a few talas are very common while others are rare. The most common instrument for keeping rhythm in Hindustani music is the tabla, while in Carnatic music it is the mridangam (also transliterated as mridang). Examples of bol, notation and additive counting in Hindustani classical music The first beat of any tala, called sam (pronounced as the English word 'sum' and meaning even or equal, archaically meaning nil) is always the most important and heavily emphasised.