Charlie and the Chocolate Factory-Listening skill. Experts Predict The Food Trends That'll Be Huge By 2025. At the beginning of the aughts, kale was a nobody. 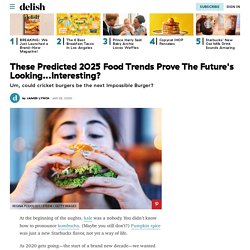 You didn’t know how to pronounce kombucha. (Maybe you still don't?) Pumpkin spice was just a new Starbucks flavor, not yet a way of life. As 2020 gets going—the start of a brand new decade—we wanted set out to discover what the next five years of food would look like...because it’s fun to know stuff before anyone else does.

Here's what the experts had to say, plus a few educated guesses of our own. Don't judge a fruit by its cover. d3signGetty Images Rather than choosing produce that looks good to the naked eye, we’ll be able to choose vegetables based on the nutrients they have in them. Personalized diets trump one-size-fits-all ones. Grocery stores are already packed with foods for specific ways of eating: keto, South Beach, Paleo, low-cholesterol. Crickets are...delicious? ChirpsFacebook Maybe you know someone who ate a cricket in another country once. Eastern medicine goes even more mainstream.

Food for every occasion. WoodkernGetty Images. The Most Famous And Greatest Food Quotes Of All Time. The next best thing to eating food, is talking about it. 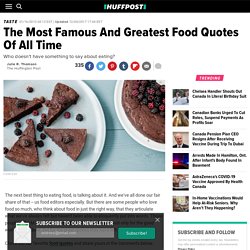 And we've all done our fair share of that -- us food editors especially. But there are some people who love food so much, who think about food in just the right way, that they articulate what we've always felt but haven't been able to eloquently put into words. Those people -- like M.F.K. Fisher and Julia Child -- are heroes, not only for the good work they've done, but for the great quotes they have left behind. Check out our favorite food quotes and share yours in the comments below. “If you're afraid of butter, use cream. " “First we eat, then we do everything else.” "Life is uncertain. "Age and glasses of wine should never be counted.

" "In wine there is wisdom, in beer there is strength, in water there is bacteria. " Experts Predict The Food Trends That'll Be Huge By 2025. Masterchef junior. Spill Your Guts or Fill Your Guts w/ Gordon Ramsay. Food, the Universal Bond. The food-waste rebel. Tristram Stuart, the Food-Waste Rebel: When I was a teenager most of the food that I was giving my pigs was actually perfectly fit for human consumption. 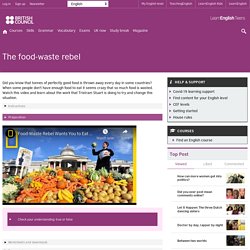 It was coming from supermarket dumpsters; bins full of food being locked and sent off to landfill sites. And I thought well I’m just scratching the surface here. At least a third of the world’s food supply is currently being wasted. When you add it all up it amounts to an enormous environmental catastrophe and a major contributor to the scarcity of food in some parts of the world. The ridiculously strict cosmetic standards laid down by supermarkets in Europe and America mean that farmers in Kenya waste thousands of tonnes of perfectly good food every single year right where there are millions of people hungry. This is the food waste from one day of packing, in one plant in Kenya. Tristram speaking to market stall holder: “So I want to take this but I also ... can I have a look at your other bins around the back?” The food waste rebel answers. The food waste rebel exercises. Teach every child about food. Kids Try Swedish Food. Jamie Oliver - Lessons. 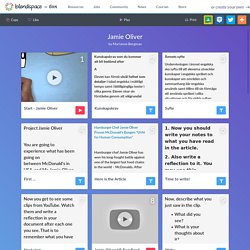 After Oliver showed how McDonald’s hamburgers are made, the franchise finally announced that it will change its recipe, and yet there was barely a peep about this in the mainstream, corporate media. Oliver repeatedly explained to the public, over several years – in documentaries, television shows and interviews – that the fatty parts of beef are “washed” in ammonium hydroxide and used in the filling of the burger. Before this process, according to the presenter, the food is deemed unfit for human consumption. According to the chef and hamburger enthusiast, Jamie Oliver, who has undertaken a war against the fast food industry, “Basically, we’re taking a product that would be sold in the cheapest way for dogs, and after this process, is being given to human beings.” Food. Vocabulary Writing and Speaking Prompts- Tell about your favourite food. What is it? What makes it your favourite? - Which food have you tasted that you will never forget for the rest of your life?