Home > Styles Some mid century home styles were derived from earlier styles such as the Colonial Revival while others departed from the traditional styles and went in a completely new direction: Modern! 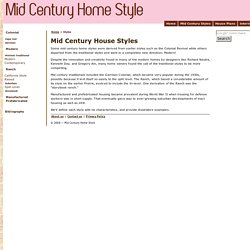 Despite the innovation and creativity found in many of the modern homes by designers like Richard Neutra, Kenneth Day, and Gregory Ain, many home owners found the call of the traditional styles to be more compelling. Mid century traditionals included the Garrison Colonial, which became very popular during the 1930s, possibly because it lent itself so easily to the split level. The Ranch, which based a considerable amount of its style on the earlier Prairie, evolved to include the tri-level.

One derivative of the Ranch was the "storybook ranch. " Manufactured and prefabricated housing became prevalent during World War II when housing for defense workers was in short supply. We'll define each style with its characteristics, and provide illustrative examples. Mid Century Modern Rustic Ranch Style House - Design No. Plan No. 3705 - 1960 Hiawatha T. Estes Home Plans. Home > Plans > Hiawatha Estes Homes > c. 1960 Design 3705 is all about access to the patio at the rear of this home. 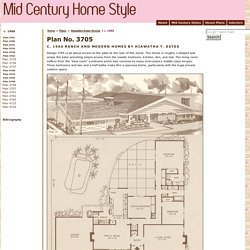 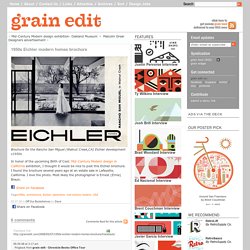 Enter the World of Eichler Design. Plan_SM_3.jpg (JPEG Image, 811 × 861 pixels) Pin by Marie Quill on House Plans. Floor Plan. This is the 1224 Eichler floor plan, scanned from an original Eichler sales brochure for an Eichler subdivision in Sunnyvale called "Fairbrae". 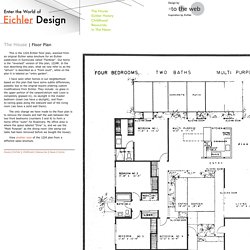 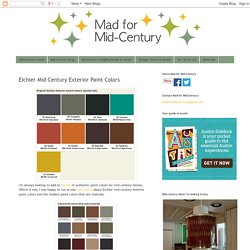 Mad for Mid-Century: June 2012. Celebrating the creative period of modern architecture between the end of WW2 and Neil Armstrong's giant leap for mankind… Mid Century Modern Home Failures. The current popularity of the mid century modern style is usually attributed to the TV series Mad Men. 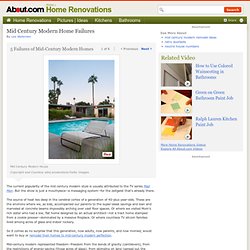 But the show is just a mouthpiece--a messaging system--for the zeitgeist that's already there. The source of heat lies deep in the cerebral cortex of a generation of 40-plus year-olds. These are the environs where we, as kids, accompanied our parents to the super-sleek savings and loan and marveled at concrete beams impossibly arching over vast floor spaces. Or where we visited Mom's rich sister who had a low, flat home designed by an actual architect--not a tract home stamped from a cookie presser--dominated by a massive fireplace. Or where countless TV sitcom families lived among acres of glass and indoor rockery. So it comes as no surprise that this generation, now adults, now parents, and now monied, would want to buy or remodel their homes to mid-century modern perfection. Long Beach Cliff May Ranchos, Modernism Meets the Ranch House. Cliff May Home Registry - Resources. House SitesBrochuresAdsFloorplansBooks House and Neighborhood Sites Looking for a little inspiration? 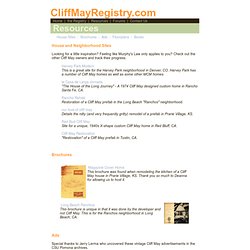 Feeling like Murphy's Law only applies to you? Check out the other Cliff May owners and track their progress. Architect Cliff May Home Registry. Modern In Denver – Modern Living Inside & Out » Winter Issue. Winter Issue The Winter issue of MID is full of stories to keep you warm this winter. 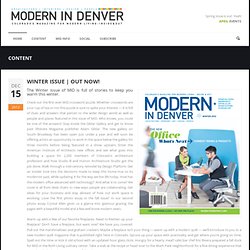 Check out the first ever MID crossword puzzle. Whether crosswords are your cup of tea or not this puzzle is sure to spike your interest — it is full of clues and answers that pertain to the wider design world as well as people and places featured in this issue of MID. Who knows, you could be one of the answers! Carey “Holiday Homes” - Harvey Park Modern. The Carey “Holiday Homes” are a set of nicely designed 2-4 bedroom modern homes built on the north side of Harvey Park, across the street from Riviera Lake. The homes feature post-and-beam construction, floor-to-ceiling glass, vaulted ceilings, clerestory windows, brick exteriors, integrated carports, and optional basements. The homes were designed by the Denver-based architecture firm Baume & Polivnick, and were part of the 1954 & 1955 Parade of Homes. The developer, Lou Carey proved very effective at promoting these homes, with large illustrated advertisements and newspaper articles about the development.

In 2007, a Carey Holiday Home was featured in an issue of Atomic Ranch Magazine. The houses were built in two phases, the first being on Vrain and Utica between Evans and Jewell in 1954, and the second phase being on the hill south of Riviera Lake stretching east to Kunsmiller Creative Arts Academy (formerly Kunsmiller Middle School) in 1955. Historic Photos. Harvey Park Modern - Learn about Harvey Park's Historic Modern Architecture. Cliff May, the father of the California Ranch House. Indoor-Outdoor Living First and foremost, Cliff May homes are unique in their relationship to the outdoors. 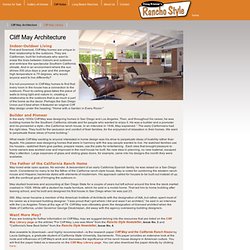 They are Californian, built for individuals who want to erase the lines between indoors and outdoors and embrace the spectacular Southern California climate. And in an environment where the sun shines 300 plus days a year and the average high temperature is 75 degrees, why would anyone want to live differently? It is not uncommon in Cliff May homes to find that every room in the house has a connection to the outdoors. Floor-to-ceiling glass takes the place of walls to bring light and nature in, creating a relationship to the outdoors that is as much a part of the home as the decor.

Perhaps the San Diego Union put it best when it featured an original Cliff May design under the heading: "Home with a Garden in Every Room. " Builder and Pioneer In the early 1930s Cliff May was designing homes in San Diego and Los Angeles. Want More May? Your Eichler home real estate agency. Keycon, Inc. Levittown: Documents of an Ideal American Suburb. Peter Bacon Hales Art History Department University of Illinois at Chicago Bernard Hoffmann, for Life Magazine, Bernard Levey Family An Early Family Poses in Front of their 1948 Cape Cod "An early Luau"-- block party in Levittown, ca. 1951. 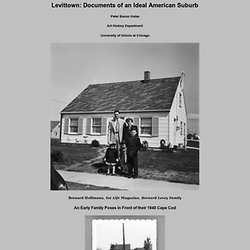 Clean Lines, Open Spaces: A View of Mid-Century Modern Architecture » Homepage. "Clean Lines, Open Spaces: A View of Mid-Century Modern Architecture" focuses on the construction boom in the United States after World War II. Sometimes considered cold and unattractive, mid-century modern designs were a by-product of post-war optimism and reflected a nation's dedication to building a new future. This new architecture used modern materials such as reinforced concrete, glass and steel and was defined by clean lines, simple shapes and unornamented facades. The documentary looks at examples of mid-century modern architecture around the state, from the University of Arkansas's Fine Arts Center designed by Arkansas native and internationally known architect Edward Durell Stone to the Tower Building in Little Rock, the Fulbright Library in Fayetteville that reflects the aesthetics of famous Chicago architect Ludwig Mies Van der Rohe, and the abandoned Hotel Mountainaire, perfectly defining art moderne.

Educator Guide Teachers. Portland Mid Century Homes - Home. Browse by Mid-Century Modern in Architectural Styles at Historical Hamilton. 28 photos of Gabe & Amanda's1954 time capsule house. Gabriel and Amanda own a stunning house, designed by architect John Erwin Ramsay, in North Carolina. “Own” may not be the right word, though: To me, Gabe and Amanda clearly have taken on the role as “caretakers” of this house with so many original features. Above: Holey Jetsons, one of my newest favoritest kitchens ever. Continue on for the story and 27 more photos of this beautiful home. We spent about year looking for the perfect house, and in 2007 while working out of town Amanda did an internet search for a nearby county. As soon as she saw it she called Gabe and told me she’d found our house! We love living with and using our mid century pieces every day. Wow. A Mid-Century Modern Catalog. [All photos by BUILD LLC] BUILD just wrapped up the remodel of an exemplary Mid-Century Modern gem near Seattle, and it’s always refreshing to see the soul of a house revived.

A Home for the 21st Century: Part 1, the Exterior. [All photos and drawings by BUILD LLC] BUILD LLC just completed the substantial renovation to a mid-century modern home in Seattle’s Innis Arden neighborhood. We thoroughly enjoyed working on this project and couldn’t be more proud of the finished product. There are a couple of key ingredients essential to a project as rewarding as this. We’ve said it before and we’ll say it again –behind every great project are extraordinary homeowners and this project is a perfect example. They courageously dove into the adventure of design and construction and we are absolutely honored to have worked with them. A package of smart architectural moves allows the house to be functional and inspiring for another 50 years. A Guide to Updating Mid-Century Modern Homes. 10 Forgotten Lessons of Mid-Century Modern Design.

An acquaintance of ours recently bought a house in the prestigious MCM Hilltop Community about 10 miles east of Seattle. Since we’re in the neighborhood working on a project, we were lucky enough to be invited over for the tour, and we weren’t let down. It’s a gem of a home, designed by Paul Kirk in 1950, the home encapsulates everything we admire about good design. A Waterloo couple mad for mid-century modern. Mid Century Home Plans - Retro House Layouts and Floor Plans - House Design - Residential Architecture. Mid Century Modern House Plans. Plans by Modern Concept Home from Houseplans.com. Mid-Century Modern Ranch Houses from Houseplans.com.