Pressherald. Although language can divide a nation, it's ridiculous to insist that only English can be spoken. 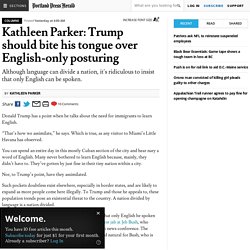 Donald Trump has a point when he talks about the need for immigrants to learn English. “That’s how we assimilate,” he says. Which is true, as any visitor to Miami’s Little Havana has observed. You can spend an entire day in this mostly Cuban section of the city and hear nary a word of English. US flag raised over reopened Cuba embassy in Havana. The US has reopened its embassy in Cuba more than 54 years after it was closed, in a symbolic step signalling the warming of ties between both countries. 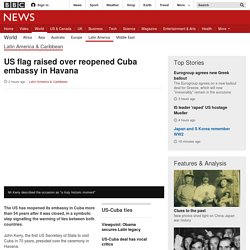 John Kerry, the first US Secretary of State to visit Cuba in 70 years, presided over the ceremony in Havana. The US flag was presented by the same US marines who brought it down in 1961. Mr Kerry said the US administration wanted to lift the trade embargo on the island - something that the Republican-controlled US Congress has blocked. In an open letter on Thursday, former Cuban leader Fidel Castro said the US owed Cuba millions of dollars because of its 53-year-long embargo. Culturally Creative sur Twitter : "@cibc @CIBCcareers Is this an ad only to welcome women or it is another bad translation in Spanish? #COPYinSPANISH. Spanish is the most spoken non-English language in U.S. homes, even among non-Hispanics.

A record 37.6 million persons ages 5 years and older speak Spanish at home, according to an analysis of the 2011 American Community Survey by the Pew Research Center. 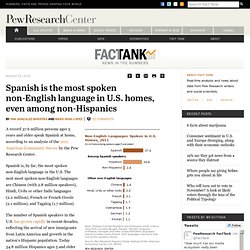 Spanish is, by far, the most spoken non-English language in the U.S. The next most spoken non-English languages are Chinese (with 2.8 million speakers), Hindi, Urdu or other Indic languages (2.2 million), French or French Creole (2.1 million), and Tagalog (1.7 million). Tremendously Bad Translation Fails. Translating one language to another is not an easy task, especially when that language is English. 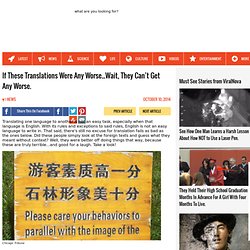 With its rules and exceptions to said rules, English is not an easy language to write in. That said, there's still no excuse for translation fails as bad as the ones below. Did these people simply look at the foreign texts and guess what they meant without context? Well, they were better off doing things that way, because these are truly terrible...and good for a laugh. Take a look! (via epicdash) Ten things you never knew about translation. 1. 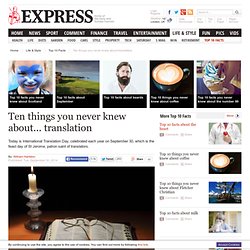 St Jerome translated the Bible into Latin in the 4th century. His translation, called The Vulgate, was the official Catholic Bible in the 16th century. Best Magazine Fall by Grafika360. Culturally Creative on Twitter: "#COPYinSPANISH A straight translation not always is a good idea. You have to see this. Hootsuite sur Twitter : "How to discover the best time to Tweet: 3 Tips On How To Discover The Best Time To Tweet. If you are trying to grow your presence on Twitter, you’re probably wondering when is the best time to tweet, so you can get the most value out of this social network. 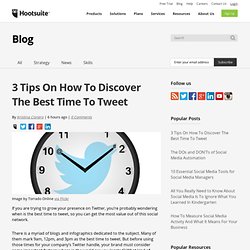 There is a myriad of blogs and infographics dedicated to the subject. Many of them mark 9am, 12pm, and 3pm as the best time to tweet. But before using those times for your company’s Twitter handle, your brand must consider some important factors: where in the world are you located? Marketing Translations gone wrong. With advances in technology and social media, Word of Mouth has truly gone to World of Mouth. 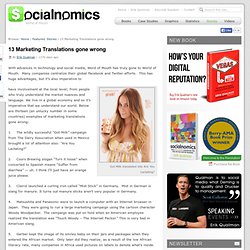 Many companies centralize their global Facebook and Twitter efforts. This has huge advantages, but it’s also imperative to Got Milk translated into Are You Lactating? Have involvement at the local level; from people who truly understand the market nuances and language. Culturally Creative sur Twitter : "#COPYinSPANISH A straight translation not always is a good idea. You have to see this. According to Scientists, This is The Most Relaxing Tune Ever Recorded. This eight minute relaxing tune is a beautiful combination of arranged harmonies, rhythms and bass lines and thus helps to slow the heart rate, reduce blood pressure and lower levels of the stress. 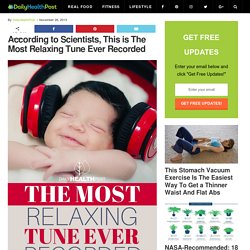 The song features guitar, piano and electronic samples of natural soundscapes. A study was conducted on 40 women, who were connected to sensors and had been given challenging puzzles to complete against the clock in order to induce a level of stress. Different songs were then played, to test their heart rate, blood pressure, breathing and brain activity. The results showed that the song Weightless was 11 per cent more relaxing than any other song and even caused drowsiness among women in the lab. It induced a 65 per cent reduction in overall anxiety and brought them to a level 35 per cent lower than their usual resting rates. Felices Fiestas. Top ten funniest Spanish–English false friends The Local. A computer translation is not always the best way...!!!