Texas Almanac. The Handbook of Texas Online. Houston is Texas’s biggest city and the fourth largest city in the country. 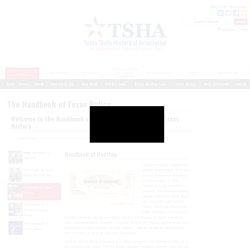 Founded on the banks of Buffalo Bayou in 1836, Houston is a city focused on progress, and is always keeping an eye towards the future. But it also has a rich and important history, which has affected the state, the nation, and the world. Houston served as the first permanent capital of the Republic of Texas, hosted the state’s first presidential convention, and built Texas’s first freeway and the world’s first air-conditioned sports stadium.

In 1969 “Houston” rang out as the first word spoken from the moon, a nod to its legacy as “Space City.” Currently the Handbook of Houston is curating new entries and seeking contributors to be involved in the project. Click here to learn more » HISTORY. Timeline of Texas History. Ancient / Pre-Columbian History 225 million B.C. to 65 million B.C. 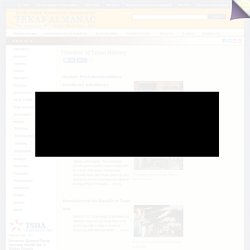 At least 16 types of dinosaurs roamed Texas from 225 million years ago to about 65 million years ago, at which time dinosaurs disappeared. . . . (more) European Exploration and Development April 30 - A ceremony of thanksgiving is held near present-day El Paso by Juan de Oñate, the members of his expedition and natives of the region. Revolution and the Republic of Texas March 6 – A 13-day siege of the Alamo by Mexican troops led by Santa Anna ends on this day with a battle in which all remaining defenders are killed. . . . Annexation and Statehood Nov. 25 – Texas' governor signs the Compromise of 1850, in which Texas gives up its claim to land that includes more than half of what is now New Mexico, about a third of Colorado, a corner of Kansas, the Oklahoma Panhandle, and a small portion of Wyoming in exchange for the United States' assumption of $10 million in debt; Texas keeps its public lands. . . . 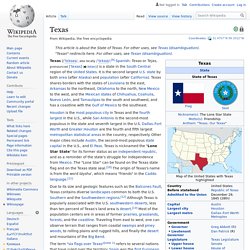 Dallas–Fort Worth and Greater Houston are the fourth and fifth largest metropolitan statistical areas in the country, respectively. Other major cities include Austin, the second most populous state capital in the U.S., and El Paso. Texas is nicknamed the Lone Star State to signify its former status as an independent republic, and as a reminder of the state's struggle for independence from Mexico. The "Lone Star" can be found on the Texan state flag and on the Texan state seal.[9] The origin of the state name, Texas, is from the word, "Tejas", which means 'friends' in the Caddo language.[10] The term "six flags over Texas"[note 1] refers to several nations that have ruled over the territory. 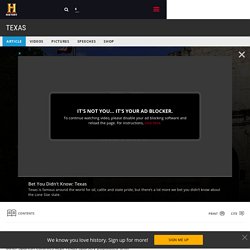 Can I watch videos if my TV provider isn't currently supported? Yes! What kind of programming is available if I log in? You will get access to more full episodes than ever before. How often is new video added to the website? There will be new episodes and web exclusives added every day. How quickly does a new episode get added after it airs on TV?