George Washington. Excel for Teachers - Colleen Conmy, Bill Hazlett, Bill Jelen. Bill Hazlett is a mathematics instructor at the University of Akron who taught for 30 years at both middle and high schools in the areas of industrial arts, mathematics, and computers. 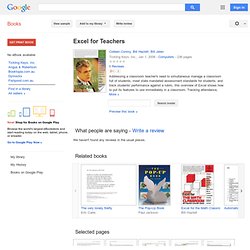 He lives in Akron, Ohio. Bill Jelenis the host of MrExcel.com and the author of 18 books on Microsoft Excel, including "Special Edition Using Excel 2007," "Pivot Table Data Crunching," "VBA & Macros for Microsoft Excel," "Excel for Marketing Managers," and "Guerilla Data Analysis Using Microsoft Excel," He has made more than 60 guest appearances on "TechTV"with Leo Laporte and was voted guest of the year on the "Computer America"radio show.

He has produced more than 600 episodes of his daily video podcast "Learn Excel from MrExcel. " Bill will entertain you while showing you the powerful tricks in Excel. Before founding MrExcel.com in 1998, Jelen spent 12 years in the trenches as a financial analyst for the accounting, finance, marketing, and operations departments of a publicly held company. Pivot Tables and Charts for Teachers in Excel 2010. Free Technology for Teachers.

Woodworking. Free Technology for Teachers. Arguments for Police Reform. She Dialed 911. The Cop Who Came to Help Raped Her. The comedian and filmmaker has been the smartest and funniest person in the room since he was in high school (maybe even earlier). 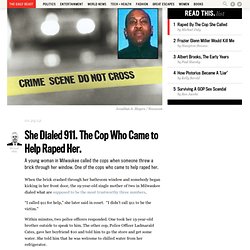 Here he's profiled just after making his first film. Albert Brooks’ second album, A Star is Bought, is the best comedy record most of you have probably never heart. It was never released on CD and it’s not available on ITunes. And that’s a shame because the record—which was made in collaboration with Harry Shearer—is one of the finest comedy albums ever made. Never mind that it was nominated for a Grammy or that it was in many ways a precursor to faux-documentary style of This Is Spinal Tap, it Albert in top form. According to Paul Slansky, who wrote “Everybody Should Have an Albert” for The Village Voice in March 1979, Brooks owns the rights to A Star is Bought, he just isn’t motivated to re-release it.

C'mon, Albert: Please. He knows funny when he sees it, which is why he was a beautiful fit to write about Albert. So whatever happened to Albert Brooks? DIY. Duplicate Bookmark Remover. Web Programming Forums. Woodworking. EDU. Make every user a power Excel user with dynamic conditional row banding. Combine data validation and conditional formatting to implement an easy-to-use dynamic banding option for your users. 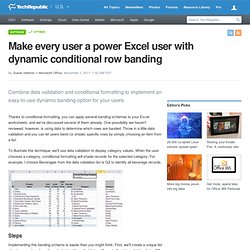 Thanks to conditional formatting, you can apply several banding schemes to your Excel worksheets, and we've discussed several of them already. One possibility we haven't reviewed, however, is using data to determine which rows are banded. Throw in a little data validation and you can let users band (or shade) specific rows by simply choosing an item from a list.

To illustrate this technique, we'll use data validation to display category values. When the user chooses a category, conditional formatting will shade records for the selected category. Steps. Create a dynamic Excel chart and make your own dashboard. A dynamic chart reuses the same chart object to chart different source values. 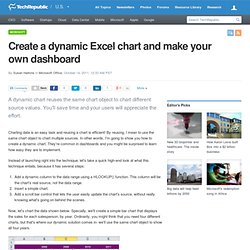 You'll save time and your users will appreciate the effort. Charting data is an easy task and reusing a chart is efficient! By reusing, I mean to use the same chart object to chart multiple sources. In other words, I'm going to show you how to create a dynamic chart. They're common in dashboards and you might be surprised to learn how easy they are to implement. Medical Research and Treatment Information from Medify.com. Free patient websites, blogs, support and community - CarePages.com. NursingA2Z.com, Nursefriendly Nursing & Healthcare Directories. Nursing. Nursing Informatics. Woodworking. Free Technology for Teachers. Vivianamat. Best and most popular career websites. Employment. Learning. Courses & lectures. Self Education.