Startup-Listing Platforms. New Media Business Models. The 5 Most Popular TED Talks of All Time. #StartupChats - Choosing the Right Online Marketing Channel - Startup Canada. About This Event “Stop trying to sell with marketing… instead, use marketing to help customers buy.” ~ AcquireB2B.com For many startups in Canada today, it’s not only desirable to market online, it’s imperative. 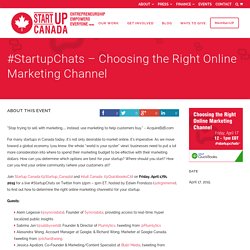 As we move toward a global economy (you know, the whole “world is your oyster” view), businesses need to put a lot more consideration into where to spend their marketing budget to be effective with their marketing dollars. Mark Zuckerberg responds to Internet.org criticism: 'We fully support net neutrality' Mark Zuckerberg took to Facebook to defend Internet.org against claims the program conflicts with net neutrality, saying the two principles "can and must coexist. 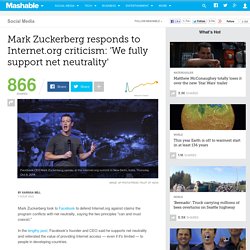 " In the lengthy post, Facebook's founder and CEO said he supports net neutrality and reiterated the value of providing Internet access — even if it's limited — to people in developing countries. Zuckerberg's remarks come just days after Internet.org made headlines when a number of prominent Indian companies withdrew their support for the program.

Internet.org is Zuckerberg's wide-ranging plan to bring Internet access to developing countries where the majority of the population may not yet be online. The service provides limited Internet access by making content from certain websites and services — Facebook, BBC News and Wikipedia, for example — available to mobile devices for free, with no data charges to the customer. "To give more people access to the Internet, it is useful to offer some service for free," Zuckerberg wrote. Internet.org by Facebook. Start-up Tools. Markus Hübner sur Twitter : "Great Collection! Awesome Free Things for #Entrepreneurs and #Startups. Awesome Free Things for Entrepreneurs and Startups. Senior Software Engineer- Test Automation @fitbit Boston.

What we are about: Fitbit empowers and inspires you to lead a healthier, more active life. 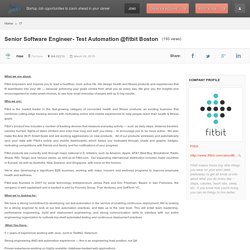 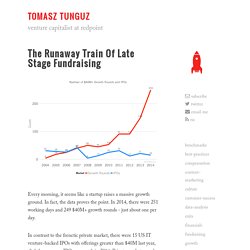 In fact, the data proves the point. In 2014, there were 251 working days and 249 $40M+ growth rounds - just about one per day. In contrast to the frenetic private market, there were 15 US IT venture-backed IPOs with offerings greater than $40M last year, slightly more one IPO per month in 2014. Private market rounds were 16x as common as IPOs in 2014, compared to the 2004-2007 era, when IPOs were about as equally common as large private financings. 39 of the coolest startups founded by women - Business Insider. Memphis Startup Musistic Will Never Stop! [sxsw] - Nibletz. Brian Wentzloff is part musician, part developer, all entrepreneur and he happens to live in Memphis Tennessee. 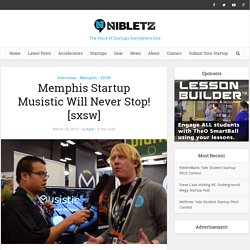 A few years back he was working with Cardinal Health, a multifaceted organization that supports a variety of health care providers like doctors offices, pharmacies and hospitals. Wentzloff was a consultant that specialized in application development which is at the core of the tools Cardinal Health provides for it’s clients. Cardinal Health had office space at the Emerge Memphis Incubator, which is where Wentzloff met Eric Mathews the former Director of Emerge. Mathews has been a startup champion, supporter and organizer since before it was cool to be in the startup space.l Segueing from a position at the Fedex Institute Of Technology, to creating his own startup support organization Launch Memphis (at the time) Mathews’ startup was creating startups.

How The Apple Watch Will Change Office Life. With the introduction of Apple’s new smartwatch earlier this week, many are speculating if we'll soon be able to just glance at our wrist rather than keeping our phones on the table during every meeting. 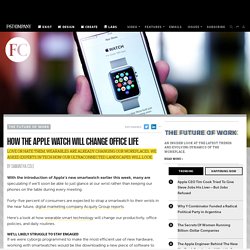 Forty-five percent of consumers are expected to strap a smartwatch to their wrists in the near future, digital marketing company Acquity Group reports. 5 Good Reasons to Start Your Own Business - Ben Kubassek's Blog. Dream BIG, Start Small, Begin Now! 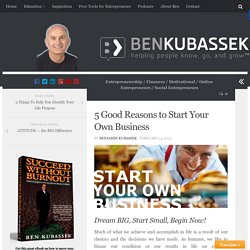 Much of what we achieve and accomplish in life is a result of our choices and the decisions we have made. As humans, we like to blame our condition or our results in life on external circumstances. It may be our lack of education, our poor parents, our lack of connections, and etc. It’s true…much of what we experience is as a result of the choices our parents made. The fact is, some things we need to accept the way they are, since we can’t change them.

How-to-start-a-business-720x340. 5 Ways the 'Lean' Approach Can Help Your Startup Grow. You’ve got a great idea, secured investment and have taken your product to market. 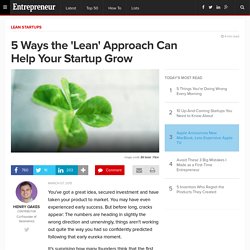 You may have even experienced early success. But before long, cracks appear: The numbers are heading in slightly the wrong direction and unnervingly, things aren’t working out quite the way you had so confidently predicted following that early eureka moment. It’s surprising how many founders think that the first version of their product will also be the final one. In reality, further refinement is nearly always needed. This happened to me too. Oxygen Startups sur Twitter : "What has our #accelerator #startups been up to? We're taking a look back at their #headlines! 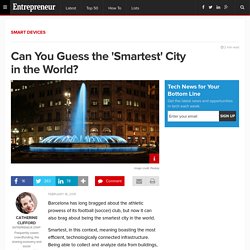 Smartest, in this context, meaning boasting the most efficient, technologically connected infrastructure. Being able to collect and analyze data from buildings, roads and bridges ostensibly allows officials more efficient processes and distribution of resources. Related: The Internet of Things Will Have Arrived When You Don't Even Notice It's There After Barcelona, the smartest cities in the world are New York, London, Nice and Singapore, according to a new report, released today from U.K. 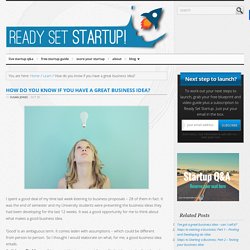 It was the end of semester and my University students were presenting the business ideas they had been developing for the last 12 weeks. It was a good opportunity for me to think about what makes a good business idea. ‘Good’ is an ambiguous term. It comes laden with assumptions – which could be different from person to person. 2. 3. Markus Stoisser sur Twitter : "@cleeb spricht über österreichische Kleinkarriertheit, wenn es um Start-Ups in Ö geht... #startup #thinkbig #doing. Helfink sur Twitter : "@cleeb on emotional motivational support for #startup in Silicon Valley versus Austrian alpine valleys... Btcintro. #StartupDay Program - Startup Canada. 7.45am – Registration & Refreshments Register from 7.45 am – 8.30 am and receive your pass for the day and delegate pack. Join us for morning refreshments and networking with our partners for the 2014 Startup Canada Day on the Hill. 8.30am – Opening Keynote (Ballroom) Join Startup Canada and TruShield Insurance to kick-off the 2nd Annual Startup Canada Day on the Hill in style with opening remarks from the Government Canada and Startup Canada’s Chairman Dr.

Adam Chowaniec and with a keynote talk by Frank O’Dea, the Co-Founder of Second Cup. Twitter. 59 Free Twitter Tools and Apps That Do Pretty Much Everything. 2.2K Flares Filament.io 2.2K Flares × Twitter is a fascinating adventure of relationships, entertainment, education, and fun. Now imagine layering on a few dozen powerups. That’s how it feels sometimes when you find just the right Twitter tool. And there’s a tool for practically every desire or whim. Tools for productivity, for efficiency, for research, and so much more. At Buffer, we tend to come across a fair share of social media tools.

Awesome, Karin Brauneis and Cosmin... - Christian H. Leeb. Relaunch_06_20_kathy_brunner. Startup catapult from Europe to Silicon Valley. Image uploaded by @IBeaglecat. MakerSQR, the community for your idea. Being a part of a community is sharing a particular attribute or living according to the same principles. The idea of people freely sharing opinions and spreading inspiration across a table in a bar or across the internet seems awesome to us. It’s the exchange of information that constantly feeds our desire for building something on our own, by also boosting our confidence. Watching online tutorials and “how-to” videos in order to develop new skills has turned into a cool phenomenon that is life-changing.

Called DIY, the movement isn’t something totally unique. The culture existed even in the 60s, but it didn’t have a specific name. Moving on to a similar area, there’s another subculture that people show a lot of interest in. Rethinking The Now - The Blog Stories. My blog is now available as an easy to read and convenient PDF: "Rethinking The Now - The Blog Stories" It's now available for all my awesome subscribers for FREE under this link: This book contains all posts that have been published on my blog since I started writing in the summer of 2013. Startup catapult from Europe to Silicon Valley. Accelerate. Octonius helps you manage your files across all clouds in one place adding a timeline to your workflow and creating a unified experience. Cosmin Ciobanu, CEO. Poshpeep : How it began #poshpeep #startup ... Cleeb : Testing @poshpeep with my Twitter...

The World Maker Faire is just around the corner and presents a great opportunity to catch a glimpse of some of the latest and greatest innovations and chat with their creators. Sept. 21-22, World Maker Faire lands at the New York Hall of Science to give New Yorkers an annual taste of what’s up and coming. Startup Europe - A manifesto for entrepreneurship and innovation to power growth in the EU. Why Startups Need Angelitos. I have been in the startup business for over 10 years now. I incorporated several companies in Austria and Germany, I helped others with advice and visionary thoughts. I learned more and more Silicon Valley style and incorporated there, too. Ibeam. 1m1m – One Million by One Million » Free Public Roundtables. "Becoming an Entrepreneur" Infographic Book by Anna Vital » Infographic T-Shirts for Enterpreneurs and Richard Branson. Entrepreneurship. Entrepreneurship.