China's social credit system. China ranks citizens with a social credit system - here's what you can do wrong and how you can be punished. China plans to rank all its citizens based on their "social credit" by 2020.People can be rewarded or punished according to their scores.Like private financial credit scores, a person's social scores can move up and down according to their behavior.At the moment the system is piecemeal — some are run by city councils, while others are scored by private tech platforms that hold personal data.Scroll down to see how you can be punished or rewarded. 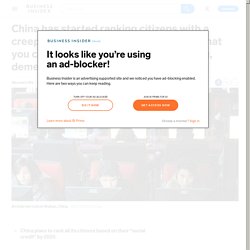 The Chinese state is setting up a vast ranking system that will monitor the behavior of its enormous population, and rank them all based on their "social credit. " The "social credit system," first announced in 2014, aims to reinforce the idea that "keeping trust is glorious and breaking trust is disgraceful," according to a government document. The program is due to be fully operational nationwide by 2020, but is being piloted for millions of people across the country already. Big Brother is watching you by Shepard FAIREY - Copy by anglaisroussel on Genial.ly. 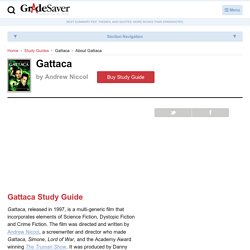 The film was directed and written by Andrew Niccol, a screenwriter and director who made Gattaca, Simone, Lord of War, and the Academy Award winning The Truman Show. It was produced by Danny Devito, Michael Shamberg and Stacey Shir, with an overall production budget of 36 million USD. Gattaca has been nominated for 14 awards and won 6, including 'Best Film' and 'Best Original Soundtrack' in the 1997 Catalonian International Film Festival.The film was given an 82% 'fresh' rating on Rotten Tomatoes, with the critical consensus stating it to be "Intelligent and scientifically provocative, Gattaca is an absorbing sci-fi drama that poses important interesting ethical questions about the nature of science.

" Divergent. Rate\\ 5, because I really liked this book because it explained the characters good and it was very well written. 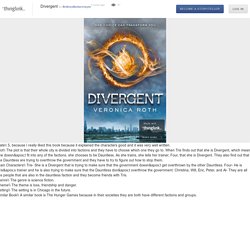 Plot\\ The plot is that their whole city is divided into factions and they have to choose which one they go to. When Tris finds out that she is Divergent, which means she doesn't fit into any of the factions, she chooses to be Dauntless. As she trains, she tells her trainer, Four, that she is Divergent. They also find out that the Dauntless are trying to overthrow the government and they have to try to figure out how to stop them. Main Characters\\ Tris- She is a Divergent that is trying to make sure that the government doesn't get overthrown by the other Dauntless. Genre\\ The genre is science fiction. Theme\\ The theme is loss, friendship and danger. Setting\\ The setting is in Chicago in the future. Choose your destiny by charlierollo on Genial.ly. Dystopian Animated Short Film (2017) Opening scene. Our Young-Adult Dystopia.

Photo I sometimes wonder what Dante or Milton or any of those guys would make of the modern appetite for the young-adult epic. 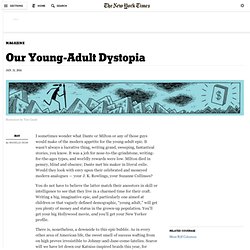 It wasn’t always a lucrative thing, writing grand, sweeping, fantastical stories, you know. It was a job for nose-to-the-grindstone, writing-for-the-ages types, and worldly rewards were low. Milton died in penury, blind and obscure; Dante met his maker in literal exile. Would they look with envy upon their celebrated and moneyed modern analogues — your J. You do not have to believe the latter match their ancestors in skill or intelligence to see that they live in a charmed time for their craft. How to recognize a dystopia - Alex Gendler. ESLvideo.com: Hunger games 2. DIVERGENT - 3e. Veronica Roth – Divergent (Chapter 1) THERE IS ONE mirror in my house. 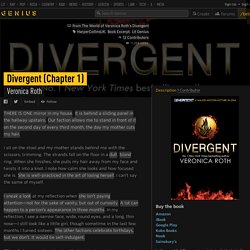 It is behind a sliding panel in the hallway upstairs. Our faction allows me to stand in front of it on the second day of every third month, the day my mother cuts my hair. I sit on the stool and my mother stands behind me with the scissors, trimming. The strands fall on the floor in a dull, blond ring. Le présent simple. Le Présent Simple (ou Present Simple) est le temps le plus utilisé en anglais. 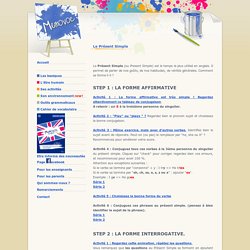 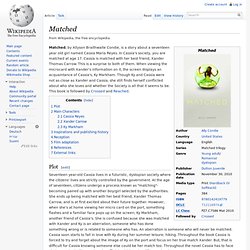 At the age of seventeen, citizens undergo a process known as "matching"- becoming paired up with another boy/girl selected by the authorities. She ends up being matched with her best friend, Xander Thomas Carrow, and is at first excited about their future together. However, when she's at home viewing her micro card on the port, something flashes and a familiar face pops up on the screen; Ky Markham, another friend of Cassia's. She is confused because she was matched with Xander and Ky is an aberration, someone who has done something wrong or is related to someone who has. Main Characters[edit] Cassia Reyes[edit] The 17-year-old female protagonist of the novel. Xander Carrow[edit] E for English. Cover dyspotia.