Home. PACK & SEND - Courier & Freight Deliveries in Australia & Internationally. Wrapped: A Stunning Animated Time-lapse that Depicts Powerful Plants Reclaiming New York. There have been countless films set against the backdrop of a post-apocalyptic New York teeming with wildlife and overgrown with plants, both Planet of the Apes and I Am Legend come to mind. 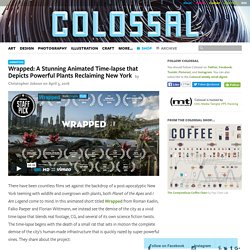 In this animated short titled Wrapped from Roman Kaelin, Falko Paeper and Florian Wittmann, we instead see the demise of the city as a vivid time-lapse that blends real footage, CG, and several of its own science fiction twists. The time-lapse begins with the death of a small rat that sets in motion the complete demise of the city’s human-made infrastructure that is quickly razed by super powerful vines. They share about the project: “Wrapped” is a VFX driven short film by Roman Kälin, Falko Paeper and Florian Wittmann that combines Time Lapse Photography with CG to create a new reality. The short explores the effects of time and change focusing on the the world’s seemingly never ending cycles. Art and politics: A reappraisal - Victor Burgin, Hilde Van Gelder. "There is no need for the western political artist, too often a disaster tourist, to sail the seven seas looking for injustices to denounce. 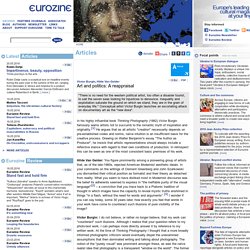 Inequality and exploitation saturate the ground on which we stand, they are in the grain of everyday life. " Conceptual artist Victor Burgin launches an excoriating attack on documentary art as the "new doxa". In his highly influential book Thinking Photography (1982) Victor Burgin famously warns artists not to succumb to the romantic myth of inspiration and originality. He argues that as all artistic "creation" necessarily depends on pre-established codes and norms, naïve intuition is an insufficient basis for the creative process. Georgia O'Keeffe. Georgia Totto O'Keeffe (November 15, 1887 – March 6, 1986) was an American artist. 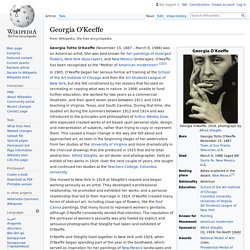 She is best known for her paintings of enlarged flowers, New York skyscrapers, and New Mexico landscapes. O'Keeffe has been recognized as the "Mother of American modernism".[1] Early life and education Career New York Georgia O'Keeffe, No. 13 Special, 1916-17, Charcoal on paper. Io9.gizmodo. Hilma af Klint. Hilma af Klint (October 26, 1862 – October 21, 1944) was a Swedish artist and mystic whose paintings were amongst the first abstract art. 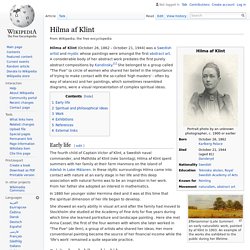 A considerable body of her abstract work predates the first purely abstract compositions by Kandinsky.[1] She belonged to a group called "The Five" (a circle of women who shared her belief in the importance of trying to make contact with the so-called 'high masters' - often by way of séances) and her paintings, which sometimes resembled diagrams, were a visual representation of complex spiritual ideas.

Early life[edit] Eftersommar (Late Summer) an early naturalistic work, painted by af Klint in 1903. An example of the works she exhibited to the public during her lifetime. Hëllø Blogzine - Blog déco scandinave, design, lifestyle. Inexpensive DIY LED Lightbox for Tracing. Home. Pierre Bonnard. Pierre Bonnard (French: [bɔnaʁ]; 3 October 1867 — 23 January 1947) was a French painter and printmaker, as well as a founding member of the Post-Impressionist group of avant-garde painters Les Nabis. 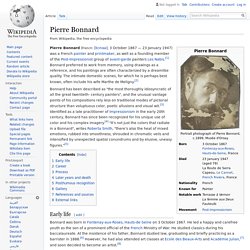 Bonnard preferred to work from memory, using drawings as a reference, and his paintings are often characterized by a dreamlike quality. The intimate domestic scenes, for which he is perhaps best known, often include his wife Marthe de Meligny.[1] Early life[edit] EdResource EuanMacleod. Ghostly Portraits Painted Onto Layers of Netting by Uttaporn Nimmalaikaew. “Nostalgic” (2014), translucent fabric, wooden bed, size is not fixed, all images courtesy of Uttaporn Nimmalaikaew Thai artist Uttaporn Nimmalaikaew paints portraits on layers of fine netting or tulle, deftly producing an analog 3D effect with subjects who appear to be sitting in chairs or lying down on beds. 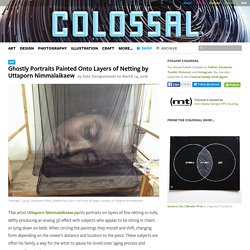 When circling the paintings they morph and shift, changing form depending on the viewer’s distance and location to the piece. These subjects are often his family, a way for the artist to pause his loved ones’ aging process and preserve them in time. Nimmalaikaew first discovered the technique while a student at Silpakorn University in Bangkok after a stray speck of paint landed on a mosquito net in his studio. Witnessing the dimensionality the surface afforded the paint, he began to explore new ways in which to paint on the utilitarian material. For each piece Nimmalaikaew begins with a digital drawing which he then prints life-size to determine the subject’s form and texture. Wrapped: A Stunning Animated Time-lapse that Depicts Powerful Plants Reclaiming New York.

Enchanting Storybook GIFs Animated by ‘Sparrows’ An illustrator who goes by the name Sparrows has been sharing a lovely series of imaginative GIFs that frequently spread like wildfire across Tumblr. 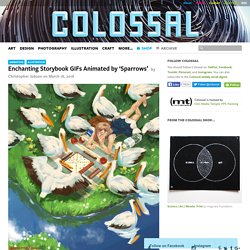 Each storybook animation features some form of magical realism where pelicans play scrabble, tattoos bloom from skin, or breakfasts appear to cook themselves. Sparrows tells us that she works professionally as an illustrator, but these brief standalone pieces are just ideas she wants to exist outside of her head. The snapshots appear to exist in the same little universe but aren’t meant to be part of a larger narrative.