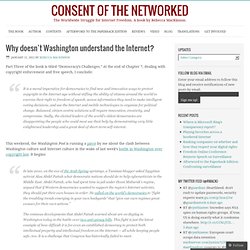 At the end of Chapter 7, dealing with copyright enforcement and free speech, I conclude: It is a moral imperative for democracies to find new and innovative ways to protect copyright in the Internet age without stifling the ability of citizens around the world to exercise their right to freedom of speech, access information they need to make intelligent voting decisions, and use the Internet and mobile technologies to organize for political change. Don't Break the Internet. 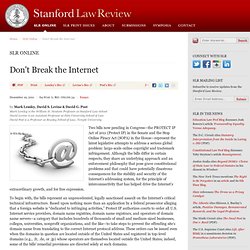 Although the bills differ in certain respects, they share an underlying approach and an enforcement philosophy that pose grave constitutional problems and that could have potentially disastrous consequences for the stability and security of the Internet’s addressing system, for the principle of interconnectivity that has helped drive the Internet’s extraordinary growth, and for free expression. To begin with, the bills represent an unprecedented, legally sanctioned assault on the Internet’s critical technical infrastructure. If you critique SOPA, read the text. If you read the text, read it right. Earlier this week Eriq Gardner speculated in a tweet that less than one tenth of one percent of folks have actually read the SOPA legislation. 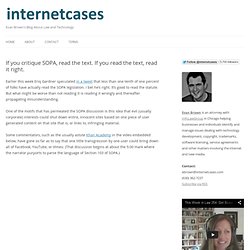 I bet he’s right. It’s good to read the statute. Defend our freedom to share (or why SOPA is a bad idea) SOPA explained: What it is and why it matters - Jan. 17. SOPA's backers say the sweeping anti-piracy bill is needed to squash sites like The Pirate Bay (left), but the tech industry says the bill is rife with unintended consequences. 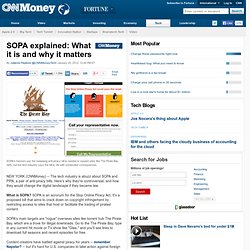 NEW YORK (CNNMoney) -- The tech industry is abuzz about SOPA and PIPA, a pair of anti-piracy bills. PIPA/SOPA and Why You Should Care. Congress is considering the most talked-about copyright legislation in a decade, known as Protect IP (PIPA) in the Senate and Stop Online Piracy (SOPA) in the House. 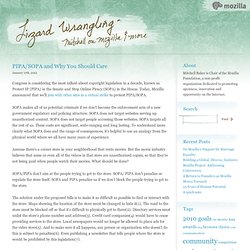 Today, Mozilla announced that we’ll join with other sites in a virtual strike to protest PIPA/SOPA. SOPA makes all of us potential criminals if we don’t become the enforcement arm of a new government regulatory and policing structure. SOPA does not target websites serving up unauthorized content. SOPA does not target people accessing those websites. PIPA, SOPA and OPEN Act Quick Reference Guide. The last month or so has seen a flurry of anti-piracy, online infringing, copyright-related bills. 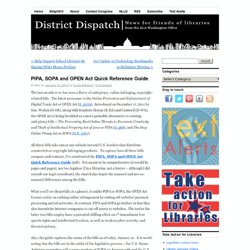 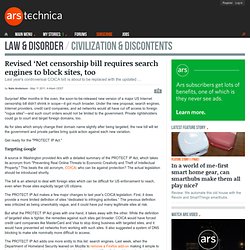 After months in the oven, the soon-to-be-released new version of a major US Internet censorship bill didn't shrink in scope—it got much broader. Under the new proposal, search engines, Internet providers, credit card companies, and ad networks would all have cut off access to foreign "rogue sites"—and such court orders would not be limited to the government. Private rightsholders could go to court and target foreign domains, too. As for sites which simply change their domain name slightly after being targeted, the new bill will let the government and private parties bring quick action against each new variation. 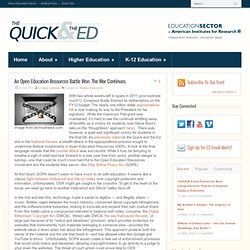 , Congress finally finished its deliberations on the FY12 budget. The nearly one trillion dollar appropriations bill is now making its way to the President for his signature. While the maximum Pell grant was maintained, it’s hard to see the continual whittling away of benefits as a victory for students (see Steve Burd’s take on the “thoughtless” approach here). There was, however, a quiet and significant victory for students in the final bill. At first blush, SOPA doesn’t seem to have much to do with education. In the mid and late 90s, technology made it easier to digitize — and illegally share — music. As students, schools, institutions, and governments grapple with quality and cost in education, OER is being looked to as a key part of a solution. 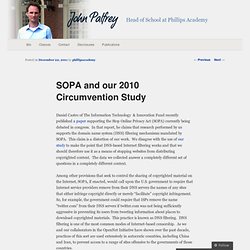 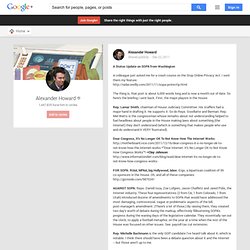 How SOPA Creates The Architecture For Much More Widespread Censorship. We've discussed many times how the censorship provisions of SOPA and PIPA require US companies to set up a system that is technically identical to internet censorship systems in countries like China and Iran. This always upsets supporters of these bills, because they prefer to focus solely on what's being censored, with the argument being that as long as the target of the censorship is infringement, rather than, say, political speech, it's okay. Torrentfreak. Despite not owning a computer or even a router, a retired woman has been ordered by a court to pay compensation to a movie company.

SOPA is the Stop Online Piracy Act, a bill introduced into the House that, according to a New York Times OpEd, “would empower the attorney general to create a blacklist of sites to be blocked by Internet service providers, search engines, payment providers and advertising networks, all without a court hearing or a trial. [SOPA] goes further, allowing private companies to sue service providers for even briefly and unknowingly hosting content that infringes on copyright.” The Dumbest Examples Of Online Copyright Law Enforcement. Nobody likes getting sued, least of all a fledgling online startup trying to squeeze its last cent into marketing and product development.

New 'Firewall' song protests SOPA copyright bill (Q&A) The songwriter behind the 2007 Internet hit " I Got a Crush on Obama " is now taking aim at the Stop Online Piracy Act . Leah Kauffman, a Philadelphia-based singer and songwriter, has released "Firewall" to protest the Hollywood-backed copyright bill, which a House of Representatives committee had been scheduled to debate tomorrow. Earlier today, the committee debate was postponed until 2012.

In addition, Dan Bull, a U.K. singer, has released "SOPA Cabana," a none-too-flattering rap taking aim against SOPA. (SOPA can "ban" you--get it?) Opposition from the two musicians is notable because the Recording Industry Association of America has been one of the leading supporters of SOPA and a Senate version called Protect IP. The RIAA has highlighted opposition from allied groups including the American Federation of Musicians and National Music Publishers Association.