New exceptions laid before UK parliament. The treatment of parodies in UK copyright law: a case for reform. 31 January, 2014 About the AuthorSamantha Love read Law at Merton College, Oxford, and is currently following the BCL course. 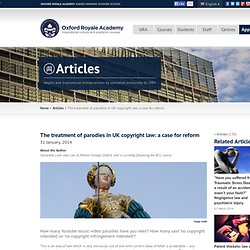 Image credit How many Youtube music video parodies have you seen? UK government speaks on copyright. This Blogger, having been out of the UK for a short time, has returned somewhat surprised by how much the outgoing UK government has had to say about copyright in the last few weeks and thought that a round-up might be worthwhile.It started off with the first published speech by the new IP Minister, Baroness (Lucy) Neville-Rolfe at an event called the "Intellectual Property Annual Seminar Mentor Dinner" (no, me neither) on 8 January, which you can read in full here. 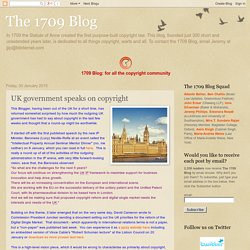 This is really a round up of all of the activities of the outgoing administration in the IP arena, with very little forward-looking vision, save that, the Baroness observed "So what are the challenges for the next 5 years? Copyright reform - the UK proposals. The time is almost upon us when upstanding members of the IP community in the UK will be able to admit publicly that they've transferred their audio CD collections onto their music players - or at least that's what the government said yesterday, as they unveiled their plans to create an exception for private copying. 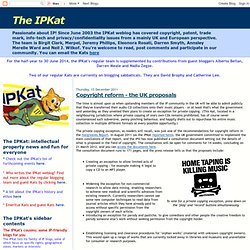 (This Kat, located in a neighbouring jurisdiction where private copying of one's own CDs remains prohibited, has of course never countenanced such subversive, penny-pinching behaviour, and happily shells out to repurchase his entire music collection in multiple different formats at every possible opportunity.) Not Allowed - Bad Crawler. UK: three new copyright exceptions come into force. The statutory instruments relating to new UK copyright exceptions for private copying and quotation & parody have now been approved by UK Parliament and come into force on 1 October 2014. 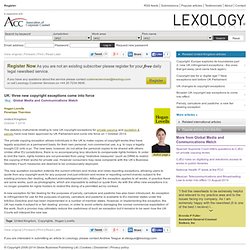 The private copying exception allows individuals in the UK to make copies of copyright works they have legally acquired on a permanent basis, for their own personal, non-commercial use, e.g. to copy a legally bought CD onto a pc. The new laws, however, do not allow the personal copies to be shared with others. Unlike other EU jurisdictions, there is no accompanying levy structure to compensate rights holders.

Two copyright exceptions missing: did the Scrutiny Committee know? Even though such a long time has passed in investigating digital opportunities, writing reviews, rethinking intellectual property and debating how to foster growth, the last word has apparently not been said on the new UK exceptions to copyright infringement. 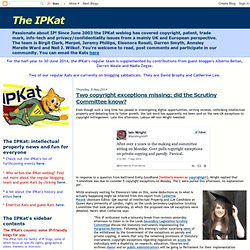 Late this afternoon, Labour MP Iain Wright tweeted: In response to a question from Katfriend Emily Goodhand [twitterly known as copyrightgirl], Wright replied that "Committee was due to consider 5 copyright exceptions on Monday. The 2 were pulled this afternoon, no explanation yet". While anxiously waiting for Eleonora's take on this, some deductions as to what is actually happening might be inferred from this report from Catherine Pocock (Assistant Editor, QM Journal of Intellectual Property and LLM Candidate at Queen Mary University of London, right) on the Lords Secondary Legislation Scrutiny Committee that took place yesterday, at which the proposed new UK exceptions were debated.

The Copyright and Rights in Performances (Personal Copies for Private Use) Regulations 2014. The Copyright and Rights in Performances (Quotation and Parody) Regulations 2014. Breakthrough in copyright law reform confirmed. Guest blog by Naomi Korn, Chair of the Libraries and Archives Copyright Alliance and Benjamin White, Head of Intellectual Property at the British Library 20 years of hard work by our sector has resulted, at last, in the recognition that copyright laws are out of kilter with the digital age and many of the activities taking place across our libraries, archives, museums and educational establishments, need to be supported by fit for purpose exceptions. 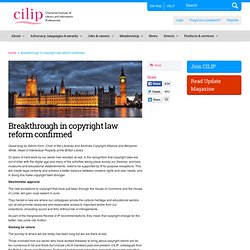 This will create legal certainty and achieve a better balance between creators rights and user needs, and in doing this make copyright itself stronger. Westminster approval. Private copying, parody and quotation exceptions: a Gattopardo-esque approach? House of Lords Business (Thursday 8 May 2014) Thursday 8 May 2014 at 11.00am *Oral Questions, 30 minutes *Lord Borwick to ask Her Majesty’s Government what assessment they have made of the export potential of the United Kingdom service sector; and what steps they are taking to strengthen it. 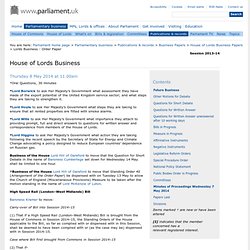 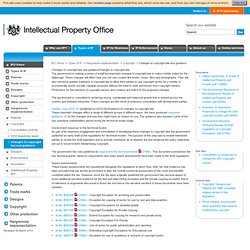 Our cookies page explains what they are, which ones we use, and how you can manage or remove them. Response-copyright-techreview. Ernment takes important step towards modernising copyright - Press releases. Changes to bring UK copyright law up to date for the digital age have taken an important step forward today (27 March 2014), as the government publishes the final Exceptions to Copyright regulations for consideration by Parliament. 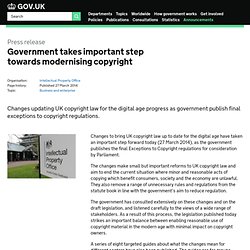 The changes make small but important reforms to UK copyright law and aim to end the current situation where minor and reasonable acts of copying which benefit consumers, society and the economy are unlawful. They also remove a range of unnecessary rules and regulations from the statute book in line with the government’s aim to reduce regulation. The government has consulted extensively on these changes and on the draft legislation, and listened carefully to the views of a wide range of stakeholders. It's no longer illegal to rip CDs. An update to UK copyright law means that from 1 June 2014 it will no longer be illegal to make copies of CDs -- or ebooks or any other media -- that you have bought for personal use. 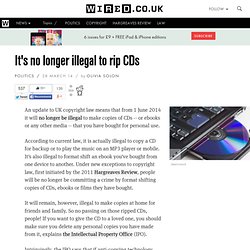 According to current law, it is actually illegal to copy a CD for backup or to play the music on an MP3 player or mobile. It's also illegal to format shift an ebook you've bought from one device to another. Under new exceptions to copyright law, first initiated by the 2011 Hargreaves Review, people will be no longer be committing a crime by format shifting copies of CDs, ebooks or films they have bought. It will remain, however, illegal to make copies at home for friends and family. UK Copyright reforms set to become Law: Content-mining, parody and much more « petermr's blog. I have been so busy over the last few days and the world has changed so much that I haven’t managed to blog one of the most significant news – the UK government has tables its final draft on the review of copyright.

See . This is fantastic. It is set to reform scientific knowledge. It means that scientific Facts can be extracted and published without explicit permission. Government anticipates further delay to UK copyright reforms. David Willetts, a minister within the UK government's department for Business, Innovation and Skills (BIS), confirmed during a debate in the House of Commons earlier this week that there would be likely to be a delay in the delivery of the copyright reforms. Why UK copyright reform is needed. March 20, 2014 | Emily Goodhand This is a guest blog post by Emily Goodhand. You can find her on Twitter as @copyrightgirl As the Government last week admitted that changes to copyright law on 1st April are unlikely to go ahead as planned, it is worth pausing for a moment to understand the repercussions of this slippage for consumers.

Why is it important for these copyright exceptions to become law? 1. There has been a trend in legislation over the last ten years or so to strengthen rights for creators of copyrighted works. 2. UK feasibility study to put digital copyright through the hoops. Monica Horten Published on 06 January 2012 When I heard yesterday that Richard Hooper had been appointed to run a feasibility study for the proposed Digital Copyright Exchange, I was optimistic that finally someone in authority would bite this poisoned bullet and wreak change on the stifled copyright industries.

Regrettably, on examining the Feasibility Study document, I see little basis for maintaining that optimism. There is an urgent need for a shake-up of copyight licencing in the EU, but sadly this study is unlikely to carry the weight necessary to get it past the mighty copyright industries. The Feasibility Study document attempts its own definition of copyright, but unfortunately it conflates ownership of economic rights with authorship – two different legal concepts (the French would go mad, mon dieu, le droit d’auteur!)

Similarly, it mixes authors with distribution channels. The Copyright Consultation: how can it impact the information profession?