Citizenship 2.0—enhanced with extra monitoring for your safety

Since August 2009 it has been the policy of Southampton City Council to require all licensed taxis and private hire vehicles to be fitted with a CCTV system, which system incorporates an audio recording function, and for that CCTV system to be in permanent operation. 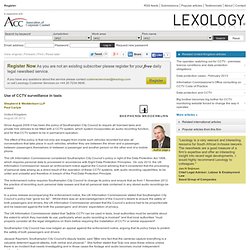 The effect of this policy is that not only are images from inside such vehicles recorded but also all conversations that take place in such vehicles, whether they are between the driver and a passenger, between passengers themselves or between a passenger and another person on the other end of a mobile phone. The UK Information Commissioner considered Southampton City Council’s policy in light of the Data Protection Act 1998, which requires personal data to processed in accordance with Eight Data Protection Principles. In a press release accompanying the enforcement notice, the UK Information Commissioner stated that Southampton City Council’s policy had “gone too far”. 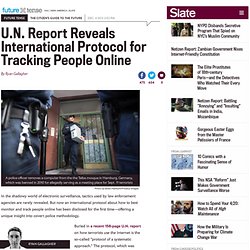 But now an international protocol about how to best monitor and track people online has been disclosed for the first time—offering a unique insight into covert police methodology. Ryan Gallagher is a journalist who reports on surveillance, security, and civil liberties. Follow Buried in a recent 158-page U.N. report on how terrorists use the Internet is the so-called “protocol of a systematic approach.”

Almost without exception, law enforcement agencies around the world refuse to talk publicly about these tactics and how they use them because they say doing so could compromise security. That is why it is highly unusual that the United Nations has chosen to publish the protocol in full—and why attention being drawn to it might unsettle police chiefs. A Picture is Worth a Thousand Words, Including Your Location. At first blush, it seems obvious that a picture could reveal your location. 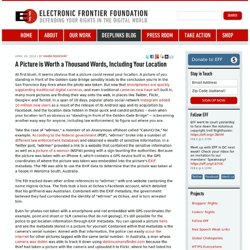 A picture of you standing in front of the Golden Gate Bridge sensibly leads to the conclusion you're in the San Francisco Bay Area when the photo was taken. But now that smartphones are quickly supplanting traditional digital cameras , and even traditional cameras now have wifi built in, many more pictures are finding their way onto the web, in places like Twitter, Flickr, Google+ and Tumblr. In a span of 10 days, popular photo social network Instagram added 10 million new users as a result of the release of its Android app and its acquisition by Facebook. What Restaurants Know (About You) Apple ID stolen from FBI. Apple patent to remotely disable camera.

Reagan’s Personal Spying Machine. FakeItunestoSpy. Behavior tracking strategies. App to spy on your weight. Website to identify protestors from pictures. I can stalk U. Micro in Ottawa airport. Automatic License Plate Recognition Tracks U. Your car spying on you. BestBuyTraxkingCarLicence. Spy camera. New police radars can 'see' inside homes. Radar devices allowing officers to detect movement through walls have been secretly used by at least 50 U.S. law enforcement agencies over the last two years. 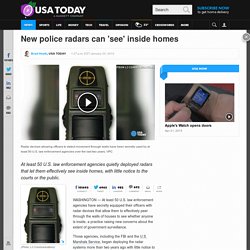 VPC WASHINGTON — At least 50 U.S. law enforcement agencies have secretly equipped their officers with radar devices that allow them to effectively peer through the walls of houses to see whether anyone is inside, a practice raising new concerns about the extent of government surveillance. Those agencies, including the FBI and the U.S. Marshals Service, began deploying the radar systems more than two years ago with little notice to the courts and no public disclosure of when or how they would be used. The technology raises legal and privacy issues because the U.S. The radars work like finely tuned motion detectors, using radio waves to zero in on movements as slight as human breathing from a distance of more than 50 feet.

By then, however, the technology was hardly new. Do U know whos watching you. School laptops camera. CIA tracking Inside fridge RFID.

HUMAN RIGHTS ORGANISATIONS FILED FORMAL COMPLAINTS WITH THE OECD. Brain hacking. One time use credit card. Swansea illegal parkers face camera car instant fines. 19 August 2012Last updated at 07:28 GMT The scheme would cost about £77,000 to set up A camera car could be introduced to tackle illegal parking, mostly at bus stops and outside schools in Swansea. 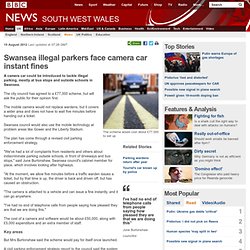 The city council has agreed to a £77,000 scheme, but will ask the public for their opinion first. The mobile camera would not replace wardens, but it covers a wider area and does not have to wait five minutes before handing out a ticket. Swansea council would also use the mobile technology at problem areas like Gower and the Liberty Stadium. Continue reading the main story. The Information That Is Needed to Identify You: 33 Bits - Digits. EU Surveillance Studies Disclosed By Pirate Party.