Use of Cloud Most Common Among Small Firms, ABA Survey Says. Lawyers’ use of web-based software and services has grown only slightly in recent years, a new survey indicates. 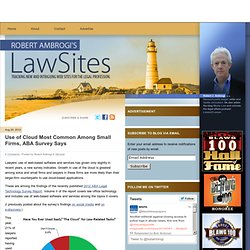 Growth in use of the cloud is greatest among solos and small firms and lawyers in these firms are more likely than their larger-firm counterparts to use cloud-based applications. These are among the findings of the recently published 2012 ABA Legal Technology Survey Report. Volume II of the report covers law office technology and includes use of web-based software and services among the topics it covers. The future of Singapore's Geekdom. News 27, Aug 2012 Exactly one month later, the geeks responded. 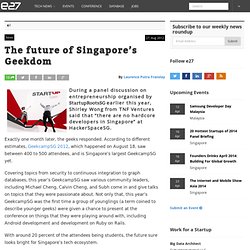 According to different estimates, GeekcampSG 2012, which happened on August 18, saw between 400 to 500 attendees, and is Singapore’s largest GeekcampSG yet. Covering topics from security to continuous integration to graph databases, this year’s GeekcampSG saw various community leaders, including Michael Cheng, Calvin Cheng, and Subh come in and give talks on topics that they were passionate about. Not only that, this year’s GeekcampSG was the first time a group of younglings (a term coined to describe younger geeks) were given a chance to present at the conference on things that they were playing around with, including Android development and development on Ruby on Rails.

With around 20 percent of the attendees being students, the future sure looks bright for Singapore’s tech ecosystem. German consumer group sets Facebook privacy ultimatum. 12 min ago | ChinaTechNews.com Alibaba Throws Money At Internet Privacy Hu Xiaoming, Alibaba's vice president for small- and micro-financial group and chief risk officer, announced in Beijing that the company will invest CNY40 million to establish a security fund. 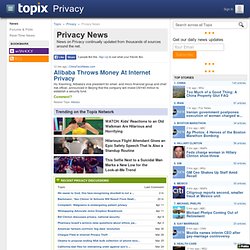 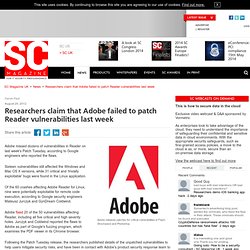 Sixteen vulnerabilities still affected the Windows and Mac OS X versions, while 31 critical and ‘trivially exploitable' bugs were found in the Linux application. Facebook’s Stock Dive Isn’t Over. Facebook’s stock hit a new low last week -- and it could be poised to plunge even further. 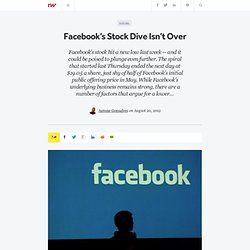 The spiral that started last Thursday ended the next day at $19.05 a share, just shy of half of Facebook’s initial public offering price in May. While Facebook’s underlying business remains strong, there are a number of factors that argue for a lower price. Inside the Latest Slide The latest slump in Facebook stock began on the day early investors could start selling a total of 271 million shares. Clarinette02 : Did I mentioned we are watching... Privacy Questions Accompany Automated License Plate Scanners - Security - Privacy.

As more license plate data is collected by law enforcement, debate grows over how such data should be stored or shared. 11 Security Sights Seen Only At Black Hat (click image for larger view and for slideshow) License plate scanners are being deployed by an increasing number of government and law enforcement agencies, but at what privacy cost? 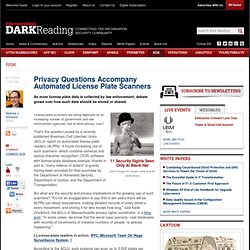 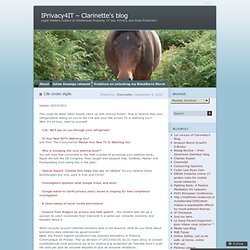 Webcast on Data Privacy in the Global Era. EFF Teaches You How to Protect Your Site Against DDOS Attacks (Video) FTC imposes record $22.5 million fine on Google in for violation of prior privacy promises. Google recruiting data privacy 'ninja' By Brandon Bailey bbailey@mercurynews.com Posted: 08/23/2012 05:02:45 PM PDT0 Comments|Updated: about a year ago Click photo to enlarge After a series of recent privacy gaffes, Google is soliciting software... 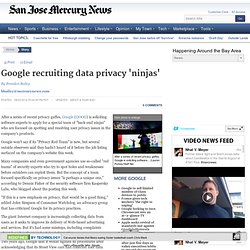 Windows 8 privacy complaint misses the. Windows 8 contains a significant privacy flaw, insecurely telling Microsoft about every program you run, according to student and developer Nadim Kobeissi whose assessment fails to grasp some key technical details. 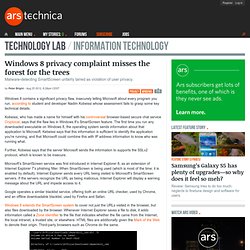 Kobeissi, who has made a name for himself with his controversial browser-based secure chat service Cryptocat, says that the flaw lies in Windows 8's SmartScreen feature. The first time you run any downloaded executable on Windows 8, the operating system sends information about that application to Microsoft. Kebeissi says that this information is sufficient to identify the application you're running, and that Microsoft could combine this with IP address information to know who was running what. Further, Kobeissi says that the server Microsoft sends the information to supports the SSLv2 protocol, which is known to be insecure. Why George Orwell is as relevant today as ever. Referencias a Sismo de magnitud 5,8 sacude Japón en Bitacoras. Google Now Is Watching You. Skype will record months data, hand over to law enforcement agencies if requested. Embarrassing Rich Kids of Instagram. Les plans de l’Elysée dérobés dans une voiture. WeKnowYourHouse.com Highlights the Dangers of Location Check-ins.

WeKnowYourHouse is the latest "social networking privacy experiment" designed to show Internet users just how easy it is for someone to find your house by what you tweet. 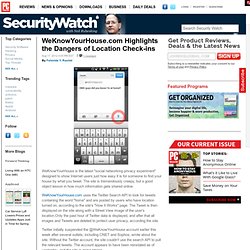 The site is tremendously creepy, but a good object lesson in how much information gets shared online. WeKnowYourHouse.com uses the Twitter Search API to look for tweets containing the word "home" and are posted by users who have location turned on, according to the site's "How It Works" page. The Tweet is then displayed on the site along with a Street View image of the user's location.Only the past hour of Twitter data is displayed, and after that all images and Tweets are deleted to protect user privacy, according the site. Twitter initially suspended the @WeKnowYourHouse account earlier this week after several outlets, including CNET and Sophos, wrote about the site. Without the Twitter account, the site couldn't use the search API to pull the relevant tweets.