Why Graph Search Could Be Facebook's Largest Privacy Invasion Ever. Share Here is one iron law of the Internet: a social network’s emphasis on monetizing its product is directly proportional to its users’ loss of privacy. 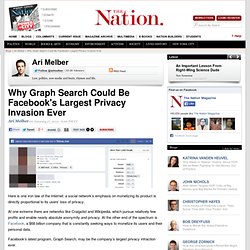 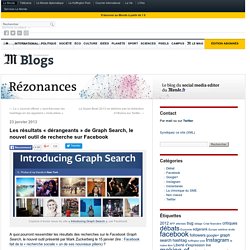 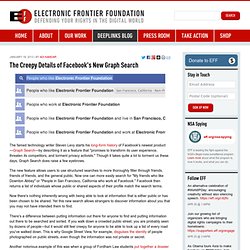 " Though it takes quite a lot to torment us these days, Graph Search does raise a few eyebrows. The new feature allows users to use structured searches to more thoroughly filter through friends, friends of friends, and the general public.

Facebook Graph Search: It’s about the data! The first thing to ask whenever Facebook (or indeed any other business) releases a new product or service is what’s in it for them. 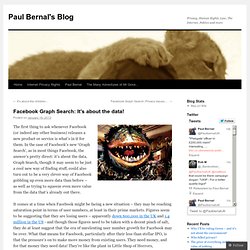 In the case of Facebook’s new ‘Graph Search’, as in most things Facebook, the answer’s pretty direct: it’s about the data. Graph Search, though it may seem to be just a cool new way of finding stuff, could also turn out to be a very clever way of Facebook gobbling up even more data than before – as well as trying to squeeze even more value from the data that’s already out there. It comes at a time when Facebook might be facing a new situation – they may be reaching saturation point in terms of user numbers, at least in their prime markets. Figures seem to be suggesting that they are losing users – apparently down 600,000 in the UK and 1.4 million in the US - and though those figures need to be taken with a decent pinch of salt, they do at least suggest that the era of unrelenting user number growth for Facebook may be over. Still, how is this about data?

Facebook Graph Search: Privacy issues…. I wrote yesterday about Facebook’s new ‘Graph Search’ system – in particular, about the way in which it is intended to convince people to put more and better data onto the system, and to lock them and businesses further into the Facebook system. 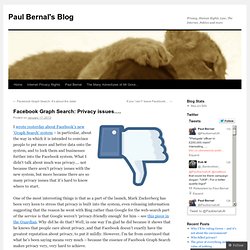 What I didn’t talk about much was privacy…. not because there aren’t privacy issues with the new system, but more because there are so many privacy issues that it’s hard to know where to start. One of the most interesting things is that as a part of the launch, Mark Zuckerberg has been very keen to stress that privacy is built into the system, even releasing information suggesting that the reason he went with Bing rather than Google for the web-search part of the service is that Google weren’t ‘privacy-friendly enough’ for him – see this piece in the Guardian. Why did he do that? There are many things to mention – I can’t even get close to covering them all in one post. I’ll start with the very purpose of the system. Facebook Graph Search: Zuckerberg reveals origin of Google privacy rift. Facebook doesn't hold many press conferences. 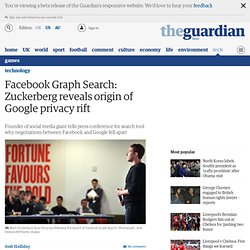 But when the world's biggest social network does talk to journalists, the briefings are always best when founder and chief executive Mark Zuckerberg goes off script. The 28-year-old did so on Tuesday, at the launch of Graph Search, when he openly described a "wider strategic rift" with Google and revealed for the first time why negotiations between Facebook and the search giant broke down over privacy.

According to Zuckerberg, Google was less willing (or able?) On Facebook, users can no longer hide from search results. In the wake of its “graph search” announcement, Facebook removed the ability for users to opt out of appearing in search results on the site, as noted by Quartz. 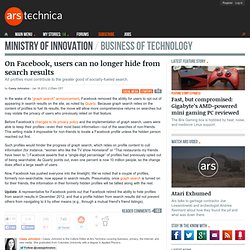 Because graph search relies on the content of profiles to fuel its results, the move will allow more comprehensive returns on searches but may violate the privacy of users who previously relied on that feature. Before Facebook’s changes to its privacy policy and the implementation of graph search, users were able to keep their profiles—even their most basic information—out of the searches of non-friends. This setting made it impossible for non-friends to locate a Facebook profile unless the hidden person reached out first. Such profiles would hinder the progress of graph search, which relies on profile content to cull information (for instance, “women who like the TV show Homeland” or “Thai restaurants my friends have been to.”) Vie privée : Mark Zuckerberg vante les efforts de Facebook.

Facebook Graph Search: for when stalking people is too difficult - Quartz. On September 5, 2006, Facebook—then two years old, far from an IPO, and still sometimes known as The Facebook—introduced what would become its defining feature: the news feed. 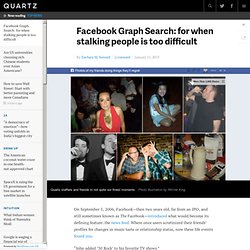 Where once users scrutinized their friends’ profiles for changes in music taste or relationship status, now these life events found you. “John added ’30 Rock’ to his favorite TV shows.” “Monica is now single.” About 12 million people, largely American college students, were using Facebook at the time, and the news feed was not what they had signed up for. Many revolted, their protestations spreading easily—and, yes, ironically—thanks to the new stream of updates on Facebook’s homepage. “I’m friends with 200 random assholes from Harvard,” a friend emailed me on the morning that Facebook unveiled the news feed. “Mexican restaurants in Menlo Park that my friends have been to.” “Photos of my friends who are single.” Though controversial, the trend seems only likely to continue. How Privacy Works with Graph Search. How Privacy Works with Graph Search.