Download.aspx. Universal Jurisdiction and U.S. Law. 176269. Agreement with the United States on mutual legal assistance. The European Union (EU) and the United States of America (U.S.) concluded an agreement on mutual legal assistance, with a view to improving cooperation between EU countries and the U.S. as well as to combating crime more effectively. 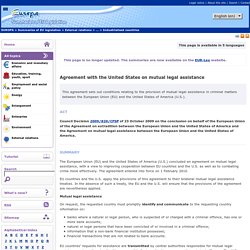 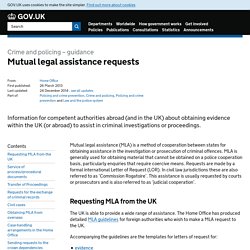 MLA is generally used for obtaining material that cannot be obtained on a police cooperation basis, particularly enquiries that require coercive means. Requests are made by a formal international Letter of Request (LOR). HarvardResearchbrochure. Transborder data access: Strong critics on plans to extend CoE Cybercrime Tre... 20131205_wp29_letter_to_cybercrime_committee. TCY_2013_7E_GN3_transborder_V2public. T-CY TRANSBORDER ACCESS. About The increasing reliance of societies on ICT is accompanied by increasing offences against and by means of computer systems. 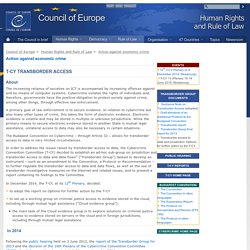 Cybercrime violates the rights of individuals and, therefore, governments have the positive obligation to protect society against crime, among other things, through effective law enforcement. A primary goal of law enforcement is to secure evidence. In relation to cybercrime but also many other types of crime, this takes the form of electronic evidence. Electronic evidence is volatile and may be stored in multiple or unknown jurisdictions. The Budapest Convention on Cybercrime – through Article 32 – allows for transborder access to data in very limited circumstances.

In December 2014, the T-CY, at its 12th Plenary, decided: T-CY(2013)14transb_elements_protocol_V2. The rule of law on the Internet - Council of Europe Commissioner. Create_speech.jsp. Why Microsoft's privacy battle with the DoJ matters. What issue can unite the EFF and BSA? 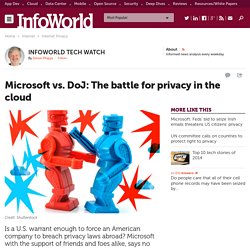 Fox News and The Guardian? Amazon and eBay? Welcome to Forbes. Ireland Asks EU To Support Microsoft In Legal Battle Involving Competing Juri... Jurisdiction over user data - what is the ideal solution to a very real world... Over the past ten days, civil society has been having kittens over the UK Data Retention and Investigatory Powers Bill, partly because of its extraterritorial extension of UK surveillance powers. 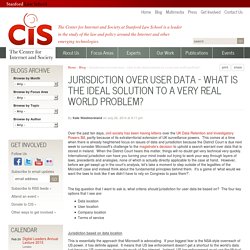 This comes at a time when there is already heightened focus on issues of data and jurisdiction because the District Court is due next week to consider Microsoft’s challenge to the magistrate’s decision to uphold a search warrant over data that is stored in Ireland. When the District Court hears this matter, things will no doubt get very technical very quickly.

International jurisdiction can have you turning your mind inside out trying to work your way through layers of laws, precedents and analogies, none of which is actually directly applicable to the case at hand. However, before we get swept up in the court’s analysis, let’s take a moment to step outside of the legalities of the Microsoft case and instead think about the fundamental principles behind them. Internet Jurisdiction and the Microsoft Warrants. According to a news report, “Earlier this week 28 technology and media companies, 23 trade associations and advocacy groups and 35 professors of computer science filed legal papers in support of Microsoft’s opposition to US court rulings earlier this year which said that US authorities’ search warrant powers apply to customer information held outside of the US.” 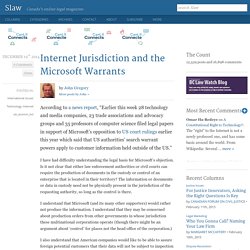 I have had difficulty understanding the legal basis for Microsoft’s objection. Is it not clear that either law enforcement authorities or civil courts can require the production of documents in the custody or control of an enterprise that is located in their territory? The information or documents or data in custody need not be physically present in the jurisdiction of the requesting authority, so long as the control is there. I understand that Microsoft (and its many other supporters) would rather not produce the information. US jurisdiction over emails in Dublin: can Microsoft win in the Court of Appe...

Microsoft is girding up for the third round in its long and bruising battle with the US government over a search warrant for a customer’s emails stored in its Dublin data center. 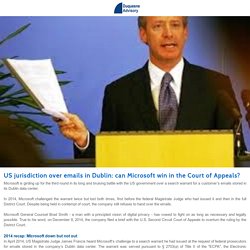 In 2014, Microsoft challenged the warrant twice but lost both times, first before the federal Magistrate Judge who had issued it and then in the full District Court. Despite being held in contempt of court, the company still refuses to hand over the emails. Microsoft General Counsel Brad Smith - a man with a principled vision of digital privacy - has vowed to fight on as long as necessary and legally possible. True to his word, on December 8, 2014, the company filed a brief with the U.S. 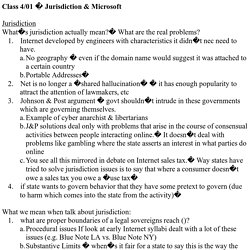 What are the real problems? 1. Internet developed by engineers with characteristics it didnt nec need to have. a. No geography even if the domain name would suggest it was attached to a certain country b. 2. US court forces Microsoft to hand over personal data from Irish server. The private emails and personal information of web users can be handed over to US law enforcement – even if that data is stored on servers outside the US, according to a New York court ruling. 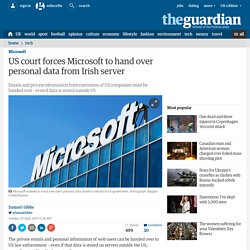 Privacy campaigners have warned that the decision, which would affect users of US internet services, shows "stark contempt" for European citizens and is in direct conflict with EU rules on data protection. In a detailed ruling on Friday, US Magistrate Judge James Francis said that US companies, including Microsoft and Google, must turn over private information when served with a valid search warrant from US law enforcement agencies. "Even when applied to information that is stored in servers abroad, an SCA warrant does not violate the presumption against extraterritorial application of American law," he concluded. U.S. Warrants for Overseas Data Trample Foreign Privacy Laws. U.S. 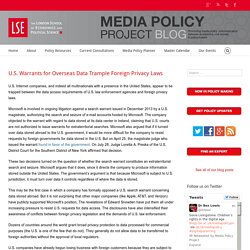 Internet companies, and indeed all multinationals with a presence in the United States, appear to be trapped between the data access requirements of U.S. law enforcement agencies and foreign privacy laws. Microsoft is involved in ongoing litigation against a search warrant issued in December 2013 by a U.S. magistrate, authorizing the search and seizure of e-mail accounts hosted by Microsoft. The company objected to the warrant with regard to data stored at its data center in Ireland, claiming that U.S. courts are not authorized to issue warrants for extraterritorial searches. Microsoft also argued that if it turned over data stored abroad to the U.S. government, it would be more difficult for the company to resist requests by foreign governments for data stored in the U.S.