Veoh Wins Important Case Against Universal Music Over DMCA Safe Harbors Again; But Is Still Dead Due To Legal Fees. We've written a few times about the sad case of Veoh. 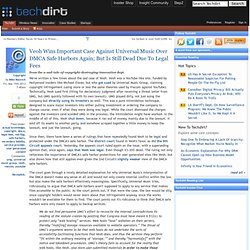 Veoh was a YouTube-like site, funded by Hollywood insiders like Michael Eisner, but who got sued by Universal Music Group, claiming copyright infringement (using more or less the same theories used by Viacom against YouTube). Technically, Veoh sued first (filing for declaratory judgment after receiving a threat letter from UMG, but UMG quickly followed with its own lawsuit). UMG played dirty, not just suing the company but directly suing its investors as well. This was a pure intimidation technique, designed to scare major investors into either pulling investment or ordering the company to change course, even if what they were doing was legal. While the court dismissed the charges against the investors (and scolded UMG in the process), the intimidation might have worked. Since then, there have been a series of rulings that have repeatedly found Veoh to be legal and protected under the DMCA's safe harbor.

CC-BY and licences; we must not get it wrong. I offer some clarification. There has been a week or two of discourse about licences for scholarly publications – much of it attempting to show that the widely used CC-BY licence (from Creative Commons) has problems. 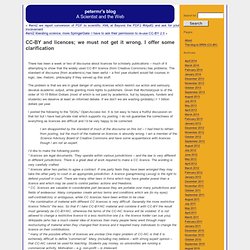 The standard of discourse (from academics) has been awful – a first year student would fail courses in logic, law, rhetoric, philosophy if they served up this stuff. The problem is that we are in great danger of using licences which restrict our action and seriously devalue academic output, while granting more rights to publishers. Given that #scholarypub is of the order of 10-15 Billion Dollars (most of which is not paid by academics, but by taxpayers, funders and students) we deserve at least an informed debate. If we don’t we are wasting (probably) > 1 billion dollars per year. 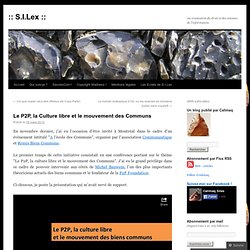 More Details On Copyright Office's Suggestions On Copyright Reform; Some Good, Some Bad. Earlier today, we broke the story that the head of the US Copyright Office, Maria Pallante is proposing major copyright reforms, including reducing the term to life plus 50 with the ability to proactively renew for another 20 years. 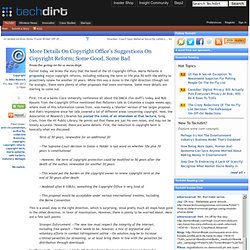 While this was a move in the right direction (though not far enough), there were plenty of other proposals that were worrisome. Some more details are starting to come out. First, I'm at a Santa Clara University conference all about the DMCA (fun stuff!) Today, and Rob Kasunic from the Copyright Office mentioned that Pallante's talk at Columbia a couple weeks ago, where most of this information comes from, was merely a "shorter" version of her larger proposal. And that's impressive since her talk covered a lot of different areas concerning copyright. Term of 50 years, renewable for an additional 20 —The Supreme Court decision in Golan v. This is the part that worries me. Depending on where this falls out, this could be pretty important. Opt-Out v. Bollywood pays the price for Phone Booth copy.