O3A1 report. Badge ethereum. Proof of Existence. It was launched in 2013 as an open source project. 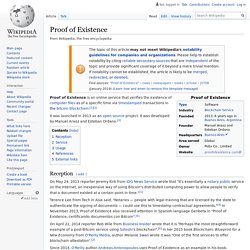 It was developed by Manuel Araoz and Esteban Ordano.[3] Reception[edit] On May 24, 2013 reporter Jeremy Kirk from IDG News Service wrote that "It's essentially a notary public service on the Internet, an inexpensive way of using Bitcoin's distributed computing power to allow people to verify that a document existed at a certain point in time. "[1] Terence Lee from Tech in Asia said, "Notaries — people with legal training that are licensed by the state to authenticate the signing of documents — could use this to timestamp contractual agreements On April 22, 2014 reporter Rob Wile from Business Insider wrote that it is "Perhaps the most straightforward example of a post-Bitcoin service using Satoshi's blockchain".[6] In her 2015 book Blockchain: Blueprint for a New Economy from O'Reilly Media, author Melanie Swan wrote it was "One of the first services to offer blockchain attestation".[2] Service[edit] The service costs 5 mBTC per use.

The Proof of Existence. Proof of existence The Blockchain has a wide range of utilities and additional uses. 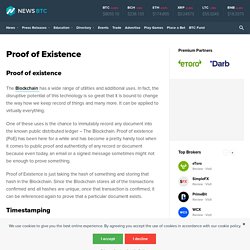 In fact, the disruptive potential of this technology is so great that it is bound to change the way how we keep record of things and many more. It can be applied to virtually everything. One of these uses is the chance to immutably record any document into the known public distributed ledger – The Blockchain. Proof of existence (PoE) has been here for a while and has become a pretty handy tool when it comes to public proof and authenticity of any record or document because even today, an email or a signed message sometimes might not be enough to prove something. What we learned from designing an academic certificates system on the blockchain — MIT MEDIA LAB. Over the past year, we have been working on a set of tools to issue, display, and verify digital credentials using the Bitcoin blockchain and the open badges specification. 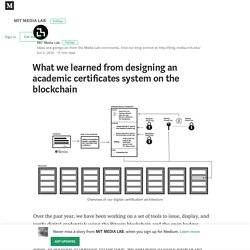 Today we are releasing version 1 of our code under the MIT open-source license to make it easier for others to start experimenting with similar ideas. In addition to opening up the code, we also want to share some of our thinking behind the design, as well as some of the interesting questions about managing digital reputations that we plan to continue working on. MIT Blockchain Infrastructure Report Part Three May 2016. Open University. Critiques of the Blockchain. (PDF) BLOCKCHAIN IN EDUCATION: INTRODUCTION AND CRITICAL REVIEW OF THE STATE OF THE ART. Blockcerts : The Open Standard for Blockchain Credentials. Woolf : Building The First Blockchain University. The rise of crypto in higher education. When David Yermack, the finance department chair at New York University Stern School of Business, first offered his course on blockchain and financial services in 2014, 35 students signed up, eight fewer than the school’s typical elective. 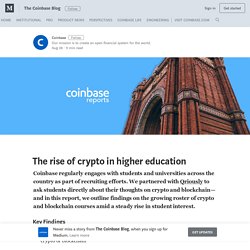 By spring 2018, the number of enrolled students climbed to 230, forcing Stern to move the class to its largest auditorium. This academic year, Yermack will teach the blockchain course both semesters to meet interest from students. Yermack says he first developed the class because he was interested in bitcoin and how quickly interest in the cryptocurrency was growing. But other reasons soon emerged, notably demand from companies for people who understood cryptocurrency-related issues. Now, he sees his class as a way to give students the skills they’ll need for jobs in the future. “A process is well underway that will lead to the migration of most financial data to blockchain-based organizations,” he says. Academia isn’t known for moving quickly. Education Ecosystem. Digital Diploma debuts at MIT. In 1868, the fledgling Massachusetts Institute of Technology on Boylston Street awarded its first diplomas to 14 graduates. 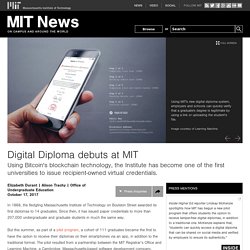 Since then, it has issued paper credentials to more than 207,000 undergraduate and graduate students in much the same way. But this summer, as part of a pilot program, a cohort of 111 graduates became the first to have the option to receive their diplomas on their smartphones via an app, in addition to the traditional format. The pilot resulted from a partnership between the MIT Registrar’s Office and Learning Machine, a Cambridge, Massachusetts-based software development company. The app is called Blockcerts Wallet, and it enables students to quickly and easily get a verifiable, tamper-proof version of their diploma that they can share with employers, schools, family, and friends.

Blockchain For Education: 3 Possible Use Cases - Disruptor Daily. Will Blockchain technology disrupt education? How can Blockchain Transform Education? – edChain. There’s no denying that education is costly. 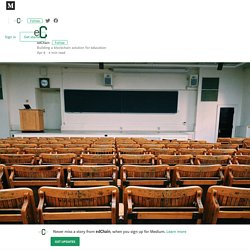 It’s now common for a student to take a US $ 200,000 loan for pursuing higher education. Estimated amount of total student debt in the world exceeds US $ 1.3 trillion. Good educational institutions are expensive. Additionally, paper-based educational certificates, records, contents and other related materials make it hard to manage the institutions. The certificates and similar credentials can be faked easily, and the organizations that need to verify the authenticity of certificates, for e.g. a prospective employer, has to explicitly trust the issuer. As always, there are systematic areas where technology can help. On the positive side, technology has given rise to e-learning but online learning has multiple limitations.