Why My Twitter Engagement Increased by 100% + The Strategy Behind It – #iSocialYou. Twitter has become a dumping ground of all links and it’s hard to find real conversations. 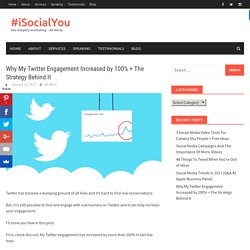 But, it is still possible to find and engage with real humans on Twitter and it can help increase your engagement. I’ll show you how in this post. First, check this out. My Twitter engagement has increased by more than 100% in last few days. Do you want to know how I did it? There is actually no secret formula or hack for it. I used a very simple strategy and consistency.

Specifically, I created a Twitter search in my niche (social media). Now let’s break it down #SocialMedia – People who are using this hashtag in their tweets lang:en – English only ? -filter:links – Tweets without any links (These are real questions and not links) I saved this search and spent 20min per day looking through the results. I engaged with them and answered their questions related to social media marketing. So with experiment, my goal was to find Tweets with real questions. There is a key lesson hidden in this experiment. Comments. All Day Raises $2 Million To Be A Media Portal For The Twitter Generation. Would-be media moguls take heart: with nothing more than a Twitter handle and a dream, you can raise capital to become the next Vice or Vox Media Group, or Buzzfeed. 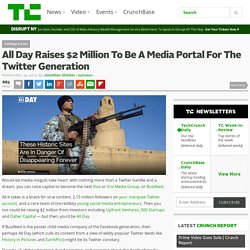 All it takes is a knack for viral content, 2.15 million followers on your marquee Twitter account, and a core team of (incredibly) young social media entrepreneurs. Then you too could be raising $2 million from investors including Upfront Ventures, 500 Startups and Daher Capital — but then, you’d be All Day. If Buzzfeed is the poster child media company of the Facebook generation, then perhaps All Day (which culls its content from a slew of wildly popular Twitter feeds like History In Pictures and EarthPics) might be its Twitter corollary. Despite all of the whingeing, hand-wringing, and worrying about the death of media businesses, venture capitalists seem more willing than ever to put money behind new brands. 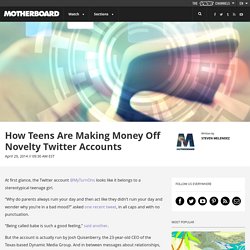 “Why do parents always ruin your day and then act like they didn’t ruin your day and wonder why you’re in a bad mood?” Asked one recent tweet, in all caps and with no punctuation. How To Make $500,000 A Year On Twitter. Kris Sanchez is tapping furiously on the screen of his iPhone 6. 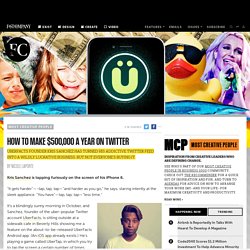 "It gets harder"—-tap, tap, tap—"and harder as you go," he says, staring intently at the sleek appliance. "You have"—tap, tap, tap—"less time. " It’s a blindingly sunny morning in October, and Sanchez, founder of the uber-popular Twitter account UberFacts, is sitting outside at a sidewalk cafe in Beverly Hills showing me a feature on the about-to-be-released UberFacts Android app. (An iOS app already exists.)

He's playing a game called UberTap, in which you try to tap the screen a certain number of times within a certain number of seconds. "I really want to give people a variety of things to do," Sanchez says, pushing up the sleeves on his dark green leather jacket to reveal a small tattoo on his wrist that says "wealth and prosperity" in Chinese characters (the other wrist says "love" also in Chinese characters). Today he says he makes about $500,000 a year just from sponsored links. The $1M-A-Month Business Behind Your Favorite Twitter Accounts. If you’re one of the 1.14 million followers of the @HistoryInPics Twitter TWTR +0.00% account, which posts delightfully obscure pictures of historical subjects and events, you may have asked yourself, “Are they making any money off this?” 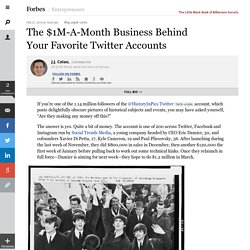 The answer is yes. Quite a bit of money. The account is one of 200 across Twitter, Facebook and Instagram run by Social Trends Media, a young company headed by CEO Eric Damier, 30, and cofounders Xavier Di Petta, 17, Kyle Cameron, 19 and Paul Pliesovsky, 36. After launching during the last week of November, they did $800,000 in sales in December, then another $120,000 the first week of January before pulling back to work out some technical kinks. Meet The Man Who Makes Six Figures a Quarter Just From Using Twitter. For anyone who is semi-active on Twitter, the chances are they have been followed, retweeted or received a direct message from someone who calls him or herself a ‘social media guru’. 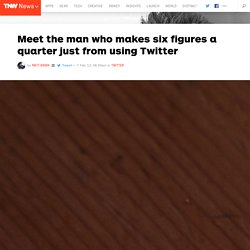 The characteristics are always the same: countless thousands of followers, which almost exactly mirror the number of people the person follows, with plenty of self-promoting keywords and hashtags filling out their profile. Social media gurus (mavens, ninjas, masters) are everywhere you look on Twitter. According to FollowerWonk (via Adage), there are now 181,000 people who use one of these four terms in their Twitter profile. The worrying thing is that the number of self-titled social media specialists has rocketed from a modest 16,000 in 2009, a 1031 percent increase in a little over three years.

Many so-called experts funnel their clients into made-to-measure tools, without a methodical strategy for how to use them or how to engage with the people that they want to be engaging with. The 2 Teenagers Who Run the Wildly Popular Twitter Feed @HistoryInPics - Alexis C. Madrigal. There is a new ubiquitous media brand on Twitter. 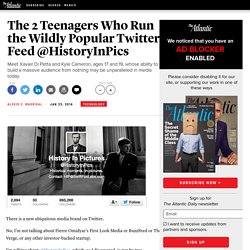 No, I'm not talking about Pierre Omidyar's First Look Media or BuzzFeed or The Verge, or any other investor-backed startup. I'm talking about @HistoryInPics, which, as I discovered, is run by two teenagers: Xavier Di Petta, 17, who lives in a small Australian town two hours north of Melbourne, and Kyle Cameron, 19, a student in Hawaii. They met hustling on YouTube when they were 13 and 15, respectively, and they've been doing social media things together (off and on) since. They've built YouTube accounts, making money off advertising. All Day Raises $2 Million To Be A Media Portal For The Twitter Generation. The Kids Behind @HistoryInPics Are Trying to Build a Legit Business. Eric Damier drove to the hotel in Los Angeles to pick up his business partners, Xavier Di Petta and Kyle Cameron, both of whom are barely old enough to drive legally. 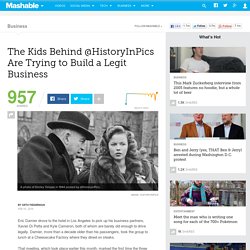 Damier, more than a decade older than his passengers, took the group to lunch at a Cheesecake Factory where they dined on steaks. That meeting, which took place earlier this month, marked the first time the three cofounders had met face-to-face in the five years they've known each other. The three have hustled their way to something resembling a business, which is based on their ability to get YouTube videos and Twitter accounts to go viral.

Part of becoming a legitimate business means moving closer to one another and having more face-to-face interactions like this one instead of their usual mode of communication — Skype. "It was weird, man," Damier said in a recent interview. ZergNet - Discover Interesting Articles. King of Clickbait. One afternoon in June, Emerson Spartz, an Internet-media entrepreneur in Chicago, left his office and walked several blocks to the Museum of Contemporary Art, where he was scheduled to speak at an event called the Millennial Impact Conference. 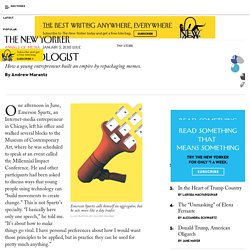 He and other participants had been asked to discuss ways that young people using technology can “build movements to create change.” This is not Spartz’s specialty. “I basically have only one speech,” he told me. “It’s about how to make things go viral. I have personal preferences about how I would want those principles to be applied, but in practice they can be used for pretty much anything.” Spartz is twenty-seven and has been successfully launching Web sites for more than half his life. ALLDAY. All Day. How to Get More Twitter Followers (The Ultimate Twitter Tips Guide) - Social Triggers. 13 Ways to Get More Twitter Followers. By Amanda MacArthur Updated November 02, 2016 When someone decides whether to follow you on Twitter, there's always a moment's glance at your follower count. 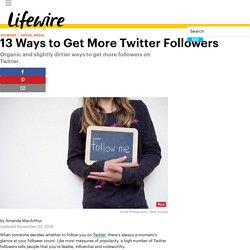 Three Methods:Becoming Follow-WorthyIncreasing Your VisibilityIncreasing Your Followers StrategicallyCommunity Q&A Silicon Valley venture capitalist Guy Kawasaki said, "Truth be told, there are only two kinds of Twitter users: those that want more followers and those that lie. "[1] Working your way into the Twitter community doesn't require being a celebrity, or finding some elaborate hack. You can increase your number of followers by becoming follow-worthy, increasing your visibility, and using a few proven strategies that will get that number of followers up. Steps Becoming Follow-Worthy <img alt="Image titled Get More Followers on Twitter Step 1" src=" width="728" height="546" class="whcdn" onload="WH.performance.clearMarks('image1_rendered'); WH.performance.mark('image1_rendered');">1Work on your profile.

Steps. Get Targeted Twitter Followers With This Awesome Free Tool! How to target influencers on Twitter… and get them to share your content! This post is part of a series on growth hacking (How our startup is growth hacking its way to success… and how you can copy us!) In this article I’ll show you some simple but effective methods to: Find and target the right Twitter influencers;Connect with them;And get them to share your message.

How to target your competitor's followers with Twitter custom audiences. For a long time working with custom audiences meant that you would need to go through an approved advertising partner. While this has its uses it was often prohibitively expensive, leaving many small and mid-size businesses unable to use this kind of targeting. Recently Twitter has changed this, allowing self-serve advertisers to create and upload custom audiences. I thought it would be useful to show you exactly how to do this. Before we begin, I should say that it's worth thinking about the kind of sentiment this type of campaign may generate.

Twitter Targeting: Sharing Content with Laser Focus. 5 Free Tools for Finding Targeted Twitter Users. When you’re engaged in the business of social media marketing, tools that make life easier – like tools to help find specific Twitter users – can be extremely helpful. And if they’re free, so much the better. Earlier this year we wrote a post on 7 Free Twitter Keyword Research Tools that identified some of the many tools available for use with Twitter, and you might find some information there that’s helpful, so check it out when you can. Today, our focus is on free social media marketing tools that will help you identify people on Twitter in either a specific niche or market focus or in a specific geographic area.

TweetAdder - Instantly Drive Highly Targeted Traffic From Twitter. Follower targeting on Twitter. The Ultimate Guide to Targeting Twitter Users and Connecting With Influencers. How to Build a Targeted Twitter Tribe of 100,000. How to Use Twitter Lists to Find Targeted Followers. How Twitter’s postcode targeting can help parties fight the general election. Introducing emoji targeting. How to Build a HUGE, Targeted Twitter Following In 20 Minutes a Day. How to Use Twitter Tailored Audiences : Social Media Examiner. Follower targeting on Twitter.