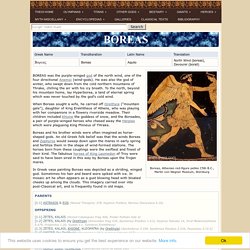 He was also the god of winter, who swept down from the cold northern mountains of Thrake, chilling the air with his icy breath. To the north, beyond his mountain home, lay Hyperborea, a land of eternal spring which was never touched by the god's cold wind. When Boreas sought a wife, he carried off Oreithyia ("mountain gale"), daughter of King Erekhtheus of Athens, who was playing with her companions in a flowery riverside meadow. Their children included Khione the goddess of snow, and the Boreades, a pair of purple-winged heroes who chased away the Harpies which were plagueing King Phineus of THrake.

Boreas and his brother winds were often imagined as horse-shaped gods. In Greek vase painting Boreas was depicted as a striding, winged god. Hesiod, Theogony 378 ff (trans. Pseudo-Hyginus, Preface (trans. THEOI GREEK MYTHOLOGY, Exploring Mythology & the Greek Gods in Classical Literature & Art. Difference Between Hermeticism and Gnosticism? When first discovering Gnosticism and Hermeticism, one is nearly buried and crushed by what amounts to an avalanche of feeble neo-occult and academic nonsense that attempts to define what these two traditions are. 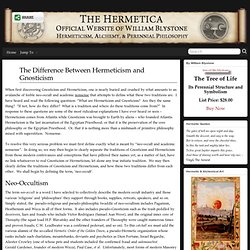 I have heard and read the following questsion: “What are Hermeticism and Gnosticism? Are they the same thing? “If not, how do they differ? What is a tradition and where do these traditions come from?” In response to these questions are some of the most ridiculous explanations I have ever heard or seen – Hermeticism comes from Atlantis while Gnosticism was brought to Earth by aliens – who founded Atlantis. To resolve this very serious problem we must first define exactly what is meant by “neo‑occult and academic nonsense”.

Neo-Occultism The term neo-occult is a word I have selected to collectively describe the modern occult industry and those various ‘religions’ and ‘philosophies’ they support through books, supplies, retreats, speakers, and so on. ARTEMIS, Greek Mythology Index. One of the great divinities of the Greeks. 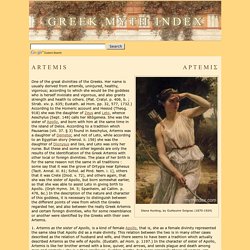 Her name is usually derived from artemês, uninjured, healthy, vigorous; according to which she would be the goddess who is herself inviolate and vigorous, and also grants strength and health to others. (Plat. Cratyl. p. 406, b. ; Strab. xiv. p. 635; Eustath. ad Hom. pp. 32, 577, 1732.) According to the Homeric account and Hesiod (Theog. 918) she was the daughter of Zeus and Leto, whence Aeschylus (Sept. 148) calls her lêtôgeneia. She was the sister of Apollo, and born with him at the same time in the island of Delos. 1. There are, however, some points also, in which there is no resemblance between Artemis and Apollo : she has nothing to do with music or poetry, nor is there any trace of her having been regarded as an oracular divinity like Apollo. 6 Real World Da Vinci Codes. Thanks to Dan Brown, everyone has one of two responses to the idea that there are hidden codes in ancient works: Either you immediately believe them, because of that mind-blowing Da Vinci Code book, or you immediately mock them, because of that bullshit Da Vinci Code book. 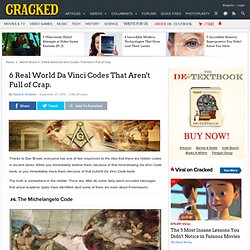 The truth is somewhere in the middle. There are, after all, some fairly weird encoded messages that actual academic types have identified. And some of them are even about Freemasons. The Michelangelo Code Encoded Messages About: Jewish mysticism. Cracked has mentioned before that Michelangelo appears to have cleverly painted God to look like a giant brain in his Sistine Chapel fresco... ... but according to a prominent professor at Yeshiva University, the rabbit hole goes much, much deeper than that: Michelangelo's work is packed full of symbols of Jewish mysticism. T-shirt evangelism is famously effective.

So, in kabbalah, the Hebrew letter gimel symbolizes g'vurah, or justice and punishment. Above: Sarcasm. See?