What Americans really eat – and tweet. One of the most common criticisms of Twitter is that it is really just a bunch of people talking about what they had for lunch. 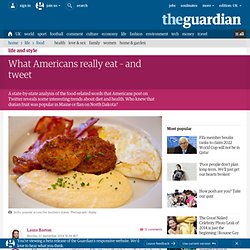 And while this may well be true, it’s worth considering that what you had for lunch actually says rather a lot about you. In fact, tweeting about lunch rather than breakfast or brunch or dinner reveals something about where you’re likely to live, how you probably vote, what you weigh and your chances of getting diabetes. Over an eight-month period up to May this year, researchers at the University of Arizona analysed more than three million food-related posts (pdf) made by American tweeters, and found that not only did the importance of each daily meal differ across the country (the Midwest goes for breakfast; the West Coast likes dinner), they were also able to identify the most popular food-related words in each state: flan, for instance, in North Dakota, capers in Oregon, potatoes (not wholly surprisingly) in Idaho.

10 theories on how uptalk originated. 18 August 2014Last updated at 19:13 ET The Magazine's recent piece on uptalk - the habit of making statements sound like questions - prompted lots of you to email theories of where it started. 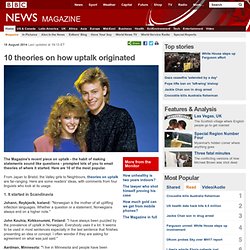 Here are 10 of the most popular. From Japan to Bristol, the Valley girls to Neighbours, theories on uptalk are far-ranging. Here are some readers' ideas, with comments from four linguists who look at its usage. 1. Johann, Reykjavik, Iceland: "Norwegian is the mother of all uplifting inflection languages. John Kouhia, Kirkkonummi, Finland: "I have always been puzzled by the prevalence of uptalk in Norwegian. Aardman, Minnesota: "I live in Minnesota and people have been uptalking here well before California made it famous. Did it come over with the Vikings? Professor David Crystal, an honorary fellow of the Chartered Institute of Linguistics, says: "This is a very credible theory. 2. 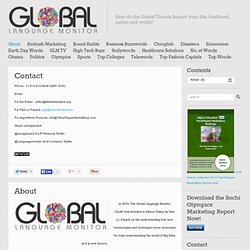 A.The Global Language Monitor documents, analyzes, and tracks the latest trends in word usage and word choices and their impact on the various aspects of culture, with a particular emphasis upon Global English.GLM, an internet media analytics company, was founded six years ago in Silicon Valley.It is a direct descendent of yourDictionary.com, the premier multi-language dictionary site with some 230 languages.YDC had very deep academic roots with some two dozen of the world’s top linguists on its Academic Council of Experts.The Global Language Monitor is one of the first companies to exclusively focus on English as the first, true global language, and its impact on various aspects of culture, such as politics, the arts, entertainment, science, technology, and the like.

The leading global media have come to rely upon GLM’s analysis and analytical techniques. Q.Who is Paul JJ Payack? 'FML,' 'YOLO,' 'Amazeballs' Added to Online Oxford Dictionary. Language Change. How do people lose their native language? June 4, 2014 Featured, Language Jesús Romero-Trillo no responses Tagged with: Jesús Romero-Trillo • Language • loss Sgt Bowe Bergdal spoke English for 23 years until he was captured by Taliban fighters in Afghanistan five years ago. 3 June 2014) Some people have gone decades without speaking or hearing their first language but they retain the ability to speak it easily, says Dr Monika Schmid, a linguistics professor at the University of Essex in the UK. 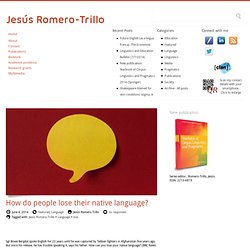 It’s rare to totally lose command of a first language, she says. The difficulties in recalling your first language are greater the more immersed you are in a second language, says Dr Aneta Pavlenko at Temple University in Philadelphia, because cognitive resources are limited. It’s well known that brain injuries can have an impact on language loss, but emotional trauma can also affect it. ENGB3 Language Change. Attitudes to language change. ▶ My Blackberry Is Not Working! - The One Ronnie, Preview - BBC One. Why I’m looking beyond the English lexicon for the word that doesn’t exist. When even our expansive lexicon fails me, I look beyond my mother tongue. 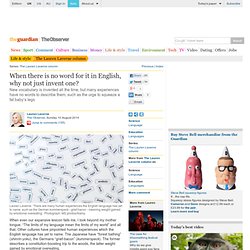 “The limits of my language mean the limits of my world” and all that. Other cultures have pinpointed human experiences which the English language has yet to name. The Japanese have “forest bathing” (shinrin-yoku), the Germans “grief-bacon” (kummerspeck). The former describes a constitution-boosting trip to the woods, the latter weight gained by emotional overeating. A few of my other favourites: the Welsh word hiraeth – a quietly melancholic longing for home similar to the Portuguese saudade (a yearning for something that might never return). Global Language Monitor, which documents language trends, counted 1,025,109.8 active English words on 1 January and estimates that a new word is created every 98 minutes, which should take us to approximately 1,028,814.2 by the time of going to print.

But there are still some things with no words to fit. Satisfaction induced by completion of household tasks: “domecstasy”.