How the internet is changing language as we know it (ikr lol) Towards the end of the last decade, a distinctive minimalist style emerged among the users of the micro-blogging site Tumblr. 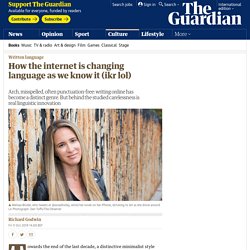 Capital letters were largely dispensed with, save for EMPHASIS; punctuation became notable by its absence; hashtags were used mostly for irony (#wild). It didn’t take long for the site’s users – who skewed young, female and literate compared with the rest of the internet – to provide their own meta-commentary on what was happening. One post, from 2012, gained more than half a million likes: when did tumblr collectively decide not to use punctuation like when did this happen why is this a thingit just looks so smooth I mean look at this sentence flow like a jungle river Or as other users put it: In the past, McCulloch notes, it was only novelists, playwrights and screenwriters who had to worry about how to elicit emotional responses with their writing. 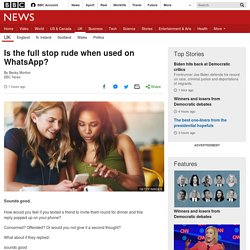 How would you feel if you texted a friend to invite them round for dinner and this reply popped up on your phone? Emoji: The Future of Language? How social media is changing language. From unfriend to selfie, social media is clearly having an impact on language. 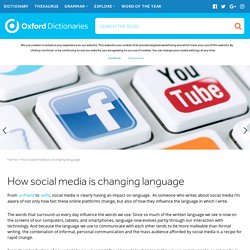 As someone who writes about social media I’m aware of not only how fast these online platforms change, but also of how they influence the language in which I write. The words that surround us every day influence the words we use. Since so much of the written language we see is now on the screens of our computers, tablets, and smartphones, language now evolves partly through our interaction with technology. And because the language we use to communicate with each other tends to be more malleable than formal writing, the combination of informal, personal communication and the mass audience afforded by social media is a recipe for rapid change.

From the introduction of new words to new meanings for old words to changes in the way we communicate, social media is making its presence felt. New ways of communicating. Emoji 'ruining people's grasp of English' because young rely on them to communicate - Recherche sur Twitter. The myth of English as the language of the digital age. Choosing the right ‘internet parlance’ reduces the chance of messages getting lost in translation and delivers involved audiences who happily share their voice. 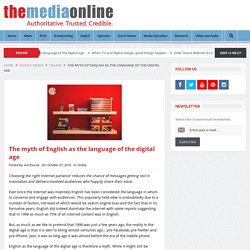 Ever since the internet was invented, English has been considered the language in which to converse and engage with audiences. This popularly held view is undoubtedly due to a number of factors, not least of which would be search engine bias and the fact that in its formative years, English did indeed dominate the internet with some reports suggesting that in 1998 as much as 75% of all internet content was in English. But, as much as we like to pretend that 1998 was just a few years ago, the reality in the digital age is that it is akin to being almost centuries ago… pre-Facebook, pre-Twitter and pre-iPhone. Jeez, it was so long ago it was almost before the era of the mobile phone. Texting is “miraculous”: 6 ways we are redefining communication.

John McWhorter asks us to think of texting less as “written language” and more as “fingered speech.” 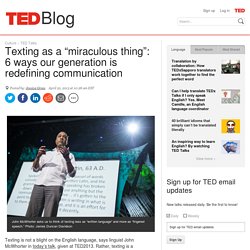 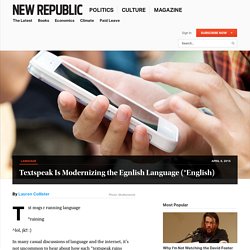 :) In many casual discussions of language and the internet, it’s not uncommon to hear about how such “textspeak ruins language”—how technology has made everybody lazy with their speech and writing. Txting is for people who can’t spell, write? Wrong. I arrived all right about 4 oclock hope you are all right grand wether We’re all familiar with the impact that the internet and text messaging is having on our ability to write properly. 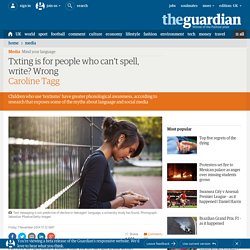 David Crystal - How is the internet changing language today? The Guardian’s style guide editor on … putting the fears around texting into historical context. There’s a song called My KZ, Ur BF by the band Everything Everything, and I love everything about it, not least because it illustrates how text messaging – once dismissed as “penmanship for illiterates” in, sad to say, the Guardian – can be elevated to an art form. 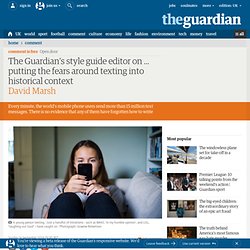 If you have ever been to a party, and if you know that “KZ” and “BF” are abbreviations of keys and boyfriend, then you already have a story from the song title – in just a few characters and spaces – that you can take wherever your imagination chooses to go. But “KZ” is also short for “kill zone”, and Everything Everything embark on a tour of destruction and chaos, perhaps caused by a terrorist attack, a complex, disturbing tour de force that ends with the compelling line: “It’s like we’re sitting with our parachutes on, but the airport’s gone.” A few years ago John Humphrys was warning in the Daily Mail, rather less eloquently: Mary had a mobile, she texted day and night.

Is the internet killing off language? The internet is changing the way we communicate. 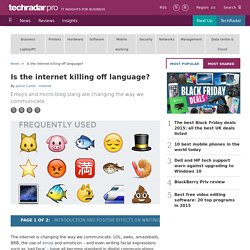 LOL, awks, amazeballs, BRB, the use of emoji and emoticon – and even writing facial expressions such as 'sad face' – have all become standard in digital communications. So ingrained, in fact, that they're changing the way we write and even talk. Text-speak: language evolution or just laziness? Death of the English Language  It started out innocently enough with text messaging. Suddenly, we all started to LOL with our BFF. We politely alerted people when we were AFK by announcing BRB. When asked, we IMO told people what we were thinking (yes, that haircut was a bad idea), and when someone ticked us off (which they inevitably do) we declared in our most exasperated way of typing WTF!

Then, this insidious habit of abbreviating everything started creeping into our spoken word. Suddenly things were just "gorg," teenagers thought your nagging was just "whatevs," and that gift you got for your birthday was "amaze! " Have we really become this lazy? As a writer, I am a fan of the English language. Viewpoint: Why do tech neologisms make people angry? The bewildering stream of new words to describe technology and its uses makes many people angry, but there's much to celebrate, writes Tom Chatfield. From agriculture to automobiles to autocorrect, new things have always required new words - and new words have always aroused strong feelings. In the 16th Century, neologisms "smelling too much of the Latin" - as the poet Richard Willes put it - were frowned upon by many.

LOL if you must, but the internet is actually making English better - Quartz. The internet is positively amazeballs. But the unedited, character-limited way we communicate on the web and mobile is often blamed for ruining the purity of language, English or otherwise. What hope is there for future literary greats when wacky internet terms like “adorbs” and “LOL” make it into the most revered dictionaries?

Is the internet destroying the foundations of language? The answer is no. To see why, just watch English 3.0, a new documentary by the London-based filmmaker Joe Gilbert. Here’s the full, 21-minute documentary: English 3.0. No more LOLs: 50% of Facebook users prefer 'haha' Still using LOL to express laughter digitally? Ha, that’s so old. According to a new study carried out by Facebook, 51% of us express our laughter on the social network with a simple “haha”.