Wealth Inequality in America, Perception vs Reality. Ten Companies Paying the Least. This summer, thousands of fast-food workers in the United States went on strike in cities across the country, demanding their wages be increased to $15 an hour and the ability to unionize. 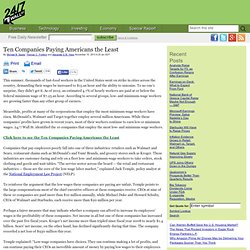 To no one’s surprise, they didn’t get it. As of 2012, an estimated 4.7% of hourly workers are paid at or below the federal minimum wage of $7.25 an hour. According to several groups, low- and minimum-wage workers are growing faster than any other group of earners. Meanwhile, profits at many of the corporations that employ the most minimum-wage workers have risen. McDonald’s, Walmart and Target together employ several million Americans. Click here to see the Ten Companies Paying Americans the Least Companies that pay employees poorly fall into one of three industries: retailers such as Walmart and Sears, restaurant chains such as McDonald’s and Yum! Perhaps a fairer measure that may indicate whether a company can afford to increase its employees’ wages is the profitability of these companies.

Buffett made $37 million a day in 2013. Richest 85 = wealth of 3.5B poorest. The combined wealth of the 85 richest people in the world is equal to that of 3.5 billion people -- or half the global population -- according to a report by Oxfam. 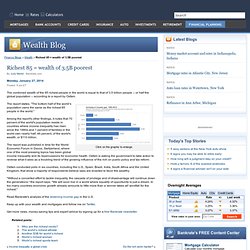 The Richest People in America List. CEO pay is more out of whack than ever. What does it take to get business-minded Bloomberg and the employee-aligned AFL-CIO to agree on something? 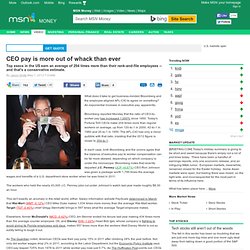 An exponential increase in executive pay, apparently. Bloomberg reported Monday that the ratio of CEO-to-worker pay has increased 1,000% since 1950. Today's Fortune 500 CEOs make 204 times more than regular workers on average, up from 120-to-1 in 2000, 42-to-1 in 1980 and 20-to-1 in 1950. The AFL-CIO has only a minor quibble with that ratio, insisting that the 2012 figure is closer to 354-to-1. In each case, both Bloomberg and the unions agree that the balance of executive pay to worker compensation can be far more skewed, depending on which company is under the microscope. The workers who held the nearly 43,000 J.C. This isn't exactly an anomaly in the retail world, either. Elsewhere, former McDonald's (MCD -0.42%) CEO Jim Skinner ended his tenure last year making 434 times more than the average counter employee.

More on moneyNOW. Americans grapple with income inequality. Americans know the challenges of trying to get ahead and speak reverently about making sure the country fulfills its promise as a land of economic opportunity. 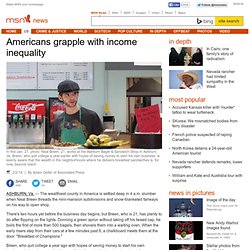 ASHBURN, Va. — The wealthiest county in America is settled deep in 4 a.m. slumber when Neal Breen threads the mini-mansion subdivisions and snow-blanketed fairways on his way to open shop. There's two hours yet before the business day begins, but Breen, who is 21, has plenty to do after flipping on the lights. Donning a green apron without taking off his tweed cap, he boils the first of more than 500 bagels, then shovels them into a waiting oven. When the early risers step from their cars at a few minutes past 6, a chalkboard meets them at the door: "Breakfast of Champions. " Breen, who quit college a year ago with hopes of saving money to start his own business, is keenly aware that the wealth in the neighborhoods where he delivers breakfast sandwiches is, for now, beyond reach. "Capitalism is about seizing opportunity. The U.S. How Unequal We Are: The Top 5 Facts You Should Know About The Wealthiest One Percent Of Americans.

By Zaid Jilani "How Unequal We Are: The Top 5 Facts You Should Know About The Wealthiest One Percent Of Americans" Source: As the ongoing occupation of Wall Street by hundreds of protesters enters its third week — and as protests spread to other cities such as Boston and Los Angeles — demonstrators have endorsed a new slogan: “We are the 99 percent.” 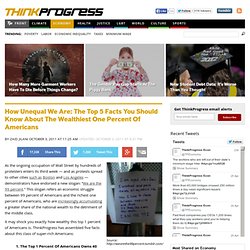