Simplifying Software Architecture Improves Quality and Speed. Why You're Talking Past Each Other, and How to Stop - Judith E. Glaser. By Judith E. 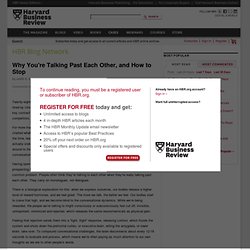 Glaser | 12:00 PM December 20, 2012 Twenty-eight years ago I began my first experiment in what I call conversational intelligence. The Best Strategic Thinkers – 5 Sure Characteristics. When it comes to determining the best strategic thinkers to invite into strategic planning efforts, the easy and frequent decision is rattling off a list of people based on titles and positions in an organization or team. 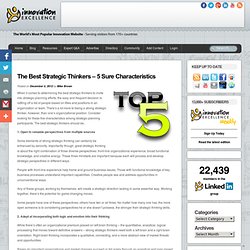 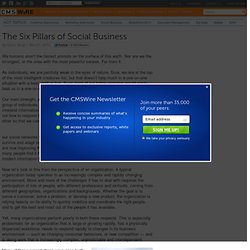 Nor are we the strongest, or the ones with the most powerful senses. Far from it. Open Services for Lifecycle Collaboration. Build Social Media Relationships Before You Need Them. Managing without Managers, and What This Might Mean. Taking Social Media By The Horns, Where You Live. Why do people share? InShare26 Last fall, at an Intranet conference in Oslo, Norway, one of the speakers raised a very important question during his session: “Why do people share?”. 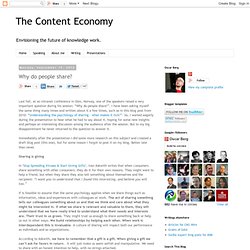 I have been asking myself the same thing many times and written about it a few times, such as in this blog post from 2010: “Understanding the psychology of sharing – what makes it tick?”. So, I waited eagerly during the presentation to hear what he had to say about it, hoping for some new insights and perhaps an interesting discussion among the audience after the session. But to my big disappointment he never returned to the question to answer it. LDAP Directories: An original NoSQL solution? By Nick Crown, Senior Product Line Manager A brief NoSQL primer: There is a lot of discussion these days on the merits of selecting a data store that aligns with the unique requirements of your application. 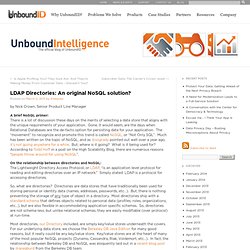 Gone, it would seem, are the days when Relational Databases are the de-facto option for persisting data for your application. FOCAS 2012: Towards Open and Innovative Governance. The 2012 Forum on Communications and Society (FOCAS) convened August 5-8 in Aspen, Colorado to discuss the movement towards open and innovative governance and develop tangible proposals and recommendations to increase transparency, promote smarter governance and enhance democracy. 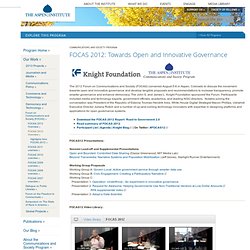 Last week I posted a story about how TD Bank Group planned for, chose and launched its enterprise collaboration platform. 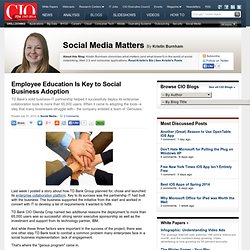 Key to its success was the partnership IT had built with the business: The business supported the initiative from the start and worked in concert with IT to develop a list of requirements it wanted to fulfill. TD Bank CIO Glenda Crisp named two additional reasons the deployment to more than 65,000 users was so successful: strong senior executive sponsorship as well as the investment and support from its technology partner, IBM. And while these three factors were important in the success of the project, there was one other step TD Bank took to combat a common problem many enterprises face in a social business implementation: lack of engagement. That's where the "genius program" came in. The “Four Cs” of 21st Century Education. Most of us know that “there is a profound gap between the knowledge and skills most students learn in school and the knowledge and skills they need in typical 21st century communities and workplaces.” 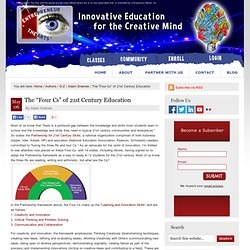 So states the Partnership for 21st Century Skills, a national organization comprised of both business (Apple, Intel, Adobe, HP) and education (National Education Association, Pearson, Scholastic) leaders, committed to “fusing the three Rs and four Cs.” As an advocate for the skills of innovation, I’m thrilled to see attention now placed on these Four Cs, with 14 states, including Illinois, having signed on to adopt the Partnership framework as a way to ready K-12 students for the 21st century. Re:Re:Fw:Re: Workers Spend 650 Hours a Year On Email - Jordan Weissmann. Unless you happen to get some sort of obsessive compulsive satisfaction from keeping your inbox in shipshape -- and hey, if you do, more power to ya -- dealing with email has got to be one of the most deadening aspects of any office job. 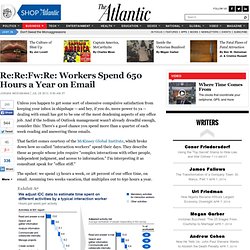 And if the tedium of Outlook management wasn't already dreadful enough, consider this: There's a good chance you spend more than a quarter of each week reading and answering those emails. That factlet comes courtesy of the McKinsey Global Institute, which broke down how so-called "interaction workers" spend their days. They describe these as people whose jobs require "complex interactions with other people, independent judgment, and access to information. " Concept Mapping as a Tool for Group Problem Solving.

Peer Support for Network Weaving. I’m doing some network coaching with a small group of network weavers and thought I would share with you some coaching frameworks and practices that help people quickly adopt and adapt network approaches. Especially with a new domain such as network weaving, people may need some training to learn about network concepts and practices before they can apply them. However, I’ve learned that the smaller the training unit (5-15 minutes max), the more likely it is that people will be able to apply the learning. Part of the training needs to be a quick activity to try out the practice in the training session.

If you’re talking about ways to create network maps, have the individual or small group develop a map for a project. The final part of training is for the participants to identify an action step they commit to undertaking before the next session. Social curation is much more than just a market. In 2010, “curation” popped up on tech blogs and VCs’ radars. 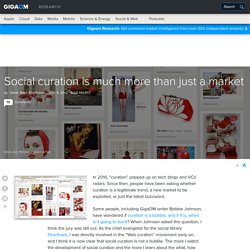 Since then, people have been asking whether curation is a legitimate trend, a new market to be exploited, or just the latest buzzword. Some people, including GigaOM writer Bobbie Johnson, have wondered if curation is a bubble, and if it is, when is it going to burst? 5 Must Have Steps To Better Collaboration. This is not a fluffy-puff collaboration article. You won’t read about team unity, the importance of open and honest dialogue or flattened org charts. This is about big data. This is about the 5 steps you must take if you hope to tap the power of big data and use it drive fundamental improvements in collaboration. This is not about solving problems. The 7 Pillars of Connecting With Absolutely Anyone. IBM Midmarket CEO Study: Collaboration and Transparency Key to Providing An Edge. IBM continued its rolling tide of market insights with the announcement this morning of its global study of midmarket CEOs. The headline: Nearly twice as many smaller- and medium-sized business CEOs see creating a more collaborative work environment with a higher level of openness and transparency as a top priority compared to the findings from the IBM CEO study conducted in 2010.

A total of 45 percent of midmarket CEOs see the need to create a more open business environment, a close to 50 percent jump from two years ago. IBM Launches New Mobile Collaboration Platform, Integrates Big Data Search and Analytics. Another mobile content collaboration platform? Big Deal! 12 Most Mind-Blowing Content Curators to Follow. How Enterprise Collaboration Tools Will Change The Future Of Work - PSFK. People Influence Tools List. Pinterest analysis: PBS, USA Today engage with readers most effectively. Several websites, including this one, have published articles recently about how journalists are using Pinterest. But none of these offers data-based analyses that measure whether newsrooms are using Pinterest to engage effectively with readers. From Co-creation to Collaboration: 5 pillars for business success. Collaboration Can Be Messy - Managing Technology.

Developing a Collaborative Approach to Improving Project Management Practices, Part 1 - Managing Technology. Let’s Call It What It Is: Pervasive Communication. How to Moderate a Brainstorming Session. Increase Your Team's Motivation Five-Fold - Scott Keller. By Scott Keller | 11:09 AM April 26, 2012. Total CRM including projects, billing and more. More than just a CRM - WORKEtc - WORKetc 2011. Online Collaboration Software for Engaging, Collaborative Learning. A structural model for Identity based on certification, recognition, reputation and anonymity. The Pillars of Influence and How to Activate Cause and Effect. The-sad-state-of-social-media-privacy-infographic.png (1000×2533) Why Atlassian is to Software as Apple is to Design.

Sharing is a Talent. Network Weavers « opencollaborarchy. Bluewolf Taps Bunchball to Incentivize Culture of Collaboration. Curation – in Need of a Cure? « opencollaborarchy. How Twitter Chats Will Open Your Mind and Network. The 5 Models Of Content Curation. The Curation Economy and The 3C’s of Information Commerce. The Seven Needs of Real-Time Curators. 12 Provocations on The Future of Social. Pinterest Rival Fancy Gets Fancier With “Match By Color” Visual Search. Collaboration.jpg (JPEG Image, 599 × 330 pixels) A Periodic Table of Visualization Methods. Mt.Gox - Bitcoin Exchange. Strategic Business Success - 3 Critical Perspectives.

The Camera Bag: The Descriptive Camera Churns Out Words Instead of Pictures. The 8 Essentials of Innovation. Crowd_Business_Models.pdf (application/pdf Object) Crowdsourcing_Landscape_v2.pdf (application/pdf Object) Managing beyond the organizational hierarchy with communities and social networks at Electronic Arts. Look Beyond the Team: It's About the Network - Jon R. Katzenbach.

Related:  Concept Mapping as a Tool for Group Problem Solving   -  Online Collaboration Software for Engaging, Collaborative Learning   -  The 5 Models Of Content Curation   -  The Curation Economy and The 3C’s of Information Commerce   -  The Seven Needs of Real-Time Curators   -  A Periodic Table of Visualization Methods   -  Education   -  Enterprise