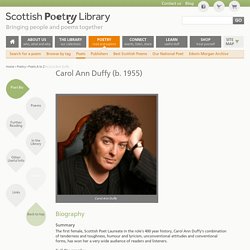 They subsequently had four sons, and moved when Carol Ann was six to Stafford, where her father worked for English Electric and managed Stafford Rangers Football Club in his spare time. Duffy attended Roman Catholic primary and middle schools, and then Stafford Girls’ High. Her early passion for reading and writing was encouraged by two of her English teachers, and developed by the poet-artist Adrian Henri (one of a trio of Liverpool poets whose work was famously anthologised as ‘The Mersey Sound’ in 1967), with whom she lived from the age of 16 until 1982. She went to the University of Liverpool, and obtained a degree in Philosophy in 1977. 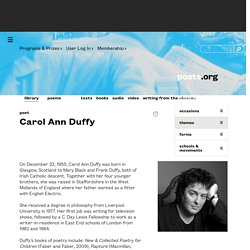 Together with her four younger brothers, she was raised in Staffordshire in the West Midlands of England where her father worked as a fitter with English Electric. She received a degree in philosophy from Liverpool University in 1977. Her first job was writing for television shows, followed by a C. Day Lewis Fellowship to work as a writer-in-residence in East End schools of London from 1982 and 1984. Duffy’s books of poetry include: New & Collected Poetry for Children (Faber and Faber, 2009); Rapture (Macmillan, 2006); Selected Poems (Penguin, 2004); Feminine Gospels (2002); and The World’s Wife (2000), a collection of poetic retellings voiced by the wives of the famous and infamous. Her awards include a five-year grant from the National Endowment for Science, Technology and the Arts in England, a Lannan Literary Award, and the T.

Love and Masculinity in Duffy's Poems. Jeanette Winterson on the poetry of Carol Ann Duffy – of course it's political. Poetry is pleasure. 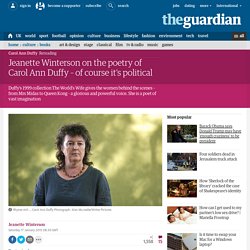 Sometimes people say to me, “why should I read a poem?” There are plenty of answers, from the profound – a poem is such an ancient means of communication that it feels like an evolutionary necessity – to the practical; a poem is like a shot of espresso – the fastest way to get a hit of mental and spiritual energy. We could talk about poetry as a rope in a storm. Poetry as one continuous mantra of mental health. Poetry as the world’s biggest, longest-running workshop on how to love. We could say that the poem is a lie detector. Yes. And pleasure. Carol Ann Duffy has often spoken about poetry as an everyday event and not as a special occasion. Just as the body is shaped for movement, the mind is shaped for poetry.

Rhythm and rhyme aid recall. It has taken a long time for rhyme to return to favour. As a powerful modern voice, Duffy has been unafraid to use rhyme from the beginning. Her poetry is a practical proof of rhyme as expressive, flexible, purposefully baited. Carol Ann Duffy on five years as poet laureate: 'It has been a joy' When Carol Ann Duffy was appointed poet laureate in 2009, the first woman to hold the post in its nearly 350-year history, she set herself several goals that included setting up new prizes, giving support to new festivals and helping to generate commissions for poets. 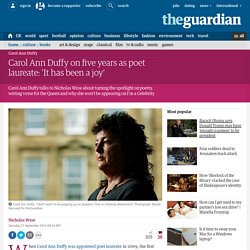 But she had only one goal for herself as a practising poet. "I wanted to continue to write as I always had, and I have tried very hard not to write a poem I previously wouldn't have written. There always had been a public element to my work, particularly during the Thatcher years, and I think all poets, to a greater or lesser degree, need to have a finger on the national pulse. Poetry provides an important alternative voice to journalists or pundits or academics as a way of dealing with things that matter to us all. But, for me, it was about finding the moment when my interests and my voice ran parallel to something that could be seen as public. " Carol Ann Duffy on five years as poet laureate: 'It has been a joy'