"The less scheduled you are, the more creative you’re going to be." Naval Ravikant

Without motivation it becomes hard to move ahead, in this crucial life where one has to see and confront various sort of challenges on daily basis, to climb up the ladder, to cross the boundaries, to achieve something mighty in life, a person has to go through hardships, struggles, problems and a lot more constraints. 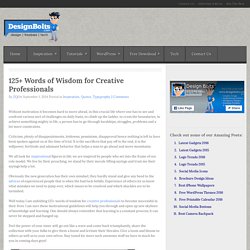 Criticism, plenty of disappointments, letdowns, pessimism, disapproval hence nothing is left to have been spoken against us at the time of trial. It is the sacrifices that pay off in the end, it is the willpower, fortitude and adamant behavior that helps a man to go ahead and move mountains. We all look for inspirational figures in life; we are inspired by people who set into the frame of our role model. We live by their preaching, we stand by their morale lifting sayings and trust me their sayings help a lot.

Obviously the new generation has their own mindset; they hardly stand and give any heed to the advices of experienced people that is when the bad luck befalls. All Ideas Are Second-Hand: Mark Twain on Plagiarism and Originality, in a Letter to Helen Keller. By Maria Popova “The kernel, the soul — let us go further and say the substance, the bulk, the actual and valuable material of all human utterances — is plagiarism.” 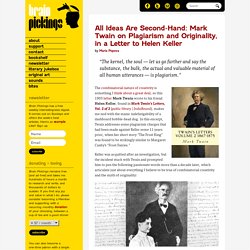 The combinatorial nature of creativity is something I think about a great deal, so this 1903 letter Mark Twain wrote to his friend Helen Keller, found in Mark Twain’s Letters, Vol. 2 of 2 (public library | IndieBound), makes me nod with the manic indefatigability of a dashboard bobble-head dog. In this excerpt, Twain addresses some plagiarism charges that had been made against Keller some 11 years prior, when her short story “The Frost King” was found to be strikingly similar to Margaret Canby’s “Frost Fairies.” Keller was acquitted after an investigation, but the incident stuck with Twain and prompted him to pen the following passionate words more than a decade later, which articulate just about everything I believe to be true of combinatorial creativity and the myth of originality: ↬ Letters of Note.

Why Emotional Excess is Essential to Writing and Creativity. The third volume of Anaïs Nin’s diaries has been on heavy rotation in recent weeks, yielding Nin’s thoughtful and timeless meditations on life, mass movements, Paris vs. 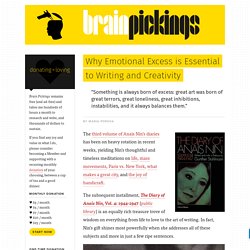 New York, what makes a great city, and the joy of handicraft. The subsequent installment, The Diary of Anais Nin, Vol. 4: 1944-1947 (public library) is an equally rich treasure trove of wisdom on everything from life to love to the art of writing. In fact, Nin’s gift shines most powerfully when she addresses all of these subjects and more in just a few ripe sentences. Such is the case with the following exquisite letter of advice she sent to a seventeen-year-old aspiring author by the name of Leonard W., whom she had taken under her wing as creative mentor. Joni Mitchell on Therapy and the Creative Mind. By Maria Popova It’s paradoxical that while “art holds out the promise of inner wholeness” for those who experience it, the relationship between creativity and mental illness is well-documented among those who make it, as is the anguish of artists who experience it. 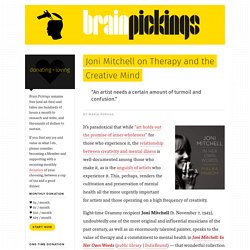 This, perhaps, renders the cultivation and preservation of mental health all the more urgently important for artists and those operating on a high frequency of creativity. Eight-time Grammy recipient Joni Mitchell (b.

Creative Inspiration. Collective Creativity. Problem Solving. Divergent Thinking. Improvisational Theatre. The Weird Strategy Dr. Seuss Used to Create His Greatest Work (And Why You Should Use It Too) In 1960, two men made a bet. 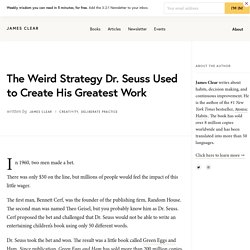 There was only $50 on the line, but millions of people would feel the impact of this little wager. The first man, Bennett Cerf, was the founder of the publishing firm, Random House. The second man was named Theo Geisel, but you probably know him as Dr. Seuss. Cerf proposed the bet and challenged that Dr. Dr. At first glance, you might think this was a lucky fluke. Before we talk about how to get started, though, I wanted to let you know I researched and compiled science-backed ways to stick to good habits and stop procrastinating. Here's what we can learn from Dr. The Power of Constraints What Dr. Setting limits for yourself — whether that involves the time you have to work out, the money you have to start a business, or the number of words you can use in a book — often delivers better results than “keeping your options open.” 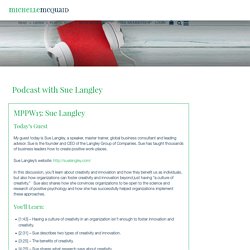 Sue is the founder and CEO of the Langley Group of Companies. Sue has taught thousands of business leaders how to create positive work-places. Sue Langley’s website: In this discussion, you’ll learn about creativity and innovation and how they benefit us as individuals, but also how organizations can foster creativity and innovation beyond just having “a culture of creativity.” You’ll Learn: Your Resources: Positivity: Top-Notch Research Reveals the Upward Spiral That Will Change Your Life – Barbara Fredrickson – in Positive Psychology – Christopher Peterson – of Psychological Well-Being: The Role of Heritability and Genes in Positive Psychology – Michael Pluess – Conference on Positive Psychology – Psychology Program – Thanks for listening!

Thanks so much for joining me again this week. Creativity. Creativity Where does creativity come from? 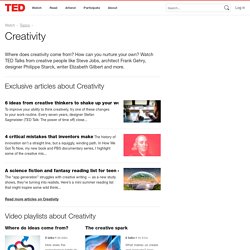 How can you nurture your own? Watch TED Talks from creative people like Steve Jobs, architect Frank Gehry, designer Philippe Starck, writer Elizabeth Gilbert and more. @import url(" Exclusive articles about Creativity 6 ideas from creative thinkers to shake up your work routine To improve your ability to think creatively, try one of these changes to your work routine. 4 critical mistakes that inventors make The history of innovation isn’t a straight line, but a squiggly, winding path. A science fiction and fantasy reading list for teen creativity The “app generation” struggles with creative writing — as a new study shows, they’re turning into realists.