Gear VR Please help with the motion controller setup. I am on UE 4.16.1 (stock) and this is my initial setup (on tick EV_GearVRController is called): Controller shows up in the game (since I run dev build from apk, I have to press any button on the controller for it to initialize), but it doesn't rotate with camera (doesn't stay on the right side) as I turn 360 deg. in the swivel chair. 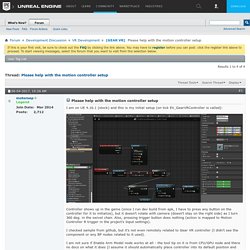 How to Choose the Best Typographic System for Your Global Game. Gear VR Phone overheating. You are going to want to look into modifying your render target resolution on the S6 to improve thermals. 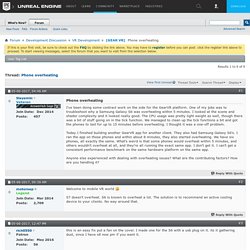 I had a lot of trouble meeting the minimum 45 minute runtime required by Oculus, at native resolutions. 4.16 has improvements to r.screenpercentage. Now it's possible to set the resolution at runtime. Previously it was only possible via ini. You can either set the resolution in device profiles, or write a custom script to manage resolutions after initialization. I wrote a blueprint which progressively lowers the render target as the phone heats up. M. Joshua Cauller's Blog - Video: 5 trailer takeaways from Into the Breach. The following blog post, unless otherwise noted, was written by a member of Gamasutra’s community. 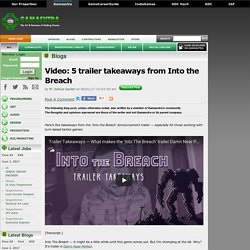 The thoughts and opinions expressed are those of the writer and not Gamasutra or its parent company. Assetstore.unity3d. Assetstore.unity3d. Time Crisis II playthrough (PS2) What Makes Attack on Titan Popular? Half-Life 2 - Apartments (Unreal Engine 4) Junji Ito - Spiral Into Horror. Junji Ito - Spiral Into Horror. Scaling Rotation. Developer Perspectives: VR Locomotion – A Series of Experiments From Crytek.

We’ve partnered with the development team at Crytek on a new video playlist series presenting research into VR movement and provide some tips to help you navigate your upcoming projects. 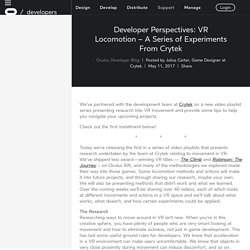 Check out the first installment below! Today we’re releasing the first in a series of video playlists that presents research undertaken by the team at Crytek relating to movement in VR. We’ve shipped two award—winning VR titles — The Climb and Robinson: The Journey – on Oculus Rift, and many of the methodologies we explored made their way into those games. Some locomotion methods and actions will make it into future projects, and through sharing our research, maybe your own. We will also be presenting methods that didn’t work and what we learned. The Research Researching ways to move around in VR isn’t new. We’ve seen plenty of examples of how developers have gone about testing movement. The Test Environment The process started with our test environment. Check out the first playlist below! Sequelitis - Mega Man Classic vs. Mega Man X. DNSQ: The Hidden Tutorial in Super Metroid.

Hitman Hokkaido (Episode 6) - Blind w/o Opportunity/Instinct/Mini-map. Marco Mortillaro's Blog - The labors of Theseus: how we designed a 3rd person VR experience. The following blog post, unless otherwise noted, was written by a member of Gamasutra’s community. 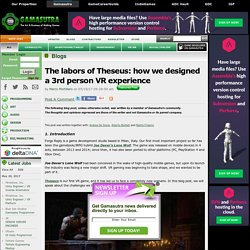 The thoughts and opinions expressed are those of the writer and not Gamasutra or its parent company. This post was written together with: Andrea De Siena, Alberto Barbati and Mattia Frigerio 1. Introduction Forge Reply is a game development studio based in Milan, Italy. Joe Dever's Lone Wolf had been conceived in the wake of high-quality mobile games, but upon its launch the industry was facing a new major shift. 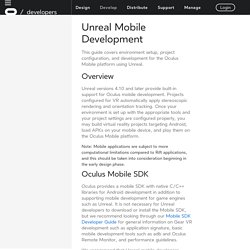 Overview Unreal versions 4.10 and later provide built-in support for Oculus mobile development. Projects configured for VR automatically apply stereoscopic rendering and orientation tracking. Once your environment is set up with the appropriate tools and your project settings are configured properly, you may build virtual reality projects targeting Android, load APKs on your mobile device, and play them on the Oculus Mobile platform. Note: Mobile applications are subject to more computational limitations compared to Rift applications, and this should be taken into consideration beginning in the early design phase. Unreal. Unreal Samples. Oculus provides samples which illustrate basic VR concepts in Unreal such as Touch, haptics, and the Boundary Component API for interacting with the Guardian System. 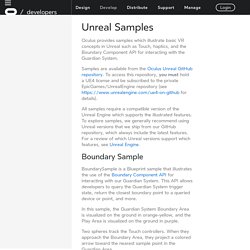 Samples are available from the Oculus Unreal GitHub repository. To access this repository, you must hold a UE4 license and be subscribed to the private EpicGames/UnrealEngine repository (see for details). All samples require a compatible version of the Unreal Engine which supports the illustrated features. To explore samples, we generally recommend using Unreal versions that we ship from our GitHub repository, which always include the latest features.

Licensing - FMOD. We were indies once too. 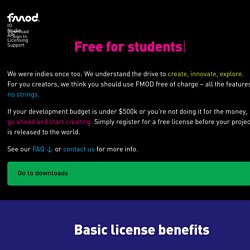 We understand the drive to create, innovate, explore. For you creators, we think you should use FMOD free of charge – all the features, no strings. If your development budget is under $500k or you’re not doing it for the money, go ahead and start creating. Simply register for a free license before your project is released to the world. See our FAQ ↓ or contact us for more info. Developer Center. Oculus Remote Monitor for Windows. Updated: May 19, 2016 The Oculus Remote Monitor client connects to mobile VR applications running on remote devices to capture, store, and display streamed-in data for performance evaluation and testing. 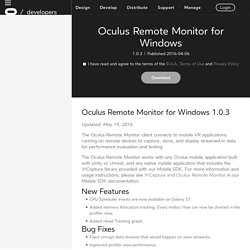 The Oculus Remote Monitor works with any Oculus mobile application built with Unity or Unreal, and any native mobile application that includes the VrCapture library provided with our Mobile SDK. For more information and usage instructions, please see VrCapture and Oculus Remote Monitor in our Mobile SDK documentation. New Features CPU Scheduler events are now available on Galaxy S7.Added memory Allocation tracking. Bug Fixes. Design in VR: 6 Tips to Get You Started. This post originally appeared on Medium. 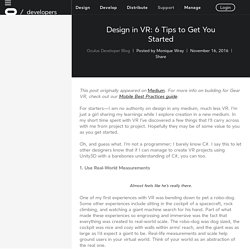 For more info on building for Gear VR, check out our Mobile Best Practices guide. For starters—I am no authority on design in any medium, much less VR. I’m just a girl sharing my learnings while I explore creation in a new medium. Tech Notes: Full Screen Mirror Windows for PC. Welcome back to the latest edition of our Tech Notes series! In today's post, we provide some best practices for setting up mirroring of your VR app on the desktop monitor. Sharing with friends in VR can happen in the app itself or through the “mirror” window. When a Rift VR application is running, the desktop monitor usually shows what the user is seeing in VR in a desktop window.

This is known as a “mirror” window. Gear VR Controller Best Practices. What Does the Gear VR Controller Provide? The Gear VR Controller provides the following inputs: Trigger—a binary button press.Touchpad surface—capacitive touch detection, provides a highly accurate position.Touchpad click—another binary button. Back button—a button to back out of UI or quit a title. This button has a few rules and requirements. See the bottom section of this page for more information.Rotation—we provide highly accurate rotational tracking for the controller.Linear Acceleration—The controller contains an accelerometer, which can be useful for throwing or hitting, but cannot be used to calculate velocity or position with significant accuracy.

That’s why it’s important that applications support the “Reset View in VR” command available in the Oculus Universal Menu. When a person resets the view in the Universal Menu, the VR application should detect this event and use the current position and orientation of the HMD as the default location with a forward-facing orientation. This will create the two nodes required for detecting the event. Oculus Developer Center Overview. Making Bullet Train and Going off the Rails in VR.

Making Bullet Train and Going off the Rails in VR. UE4 - Tutorial - Ice! (Ice baby!) 80. 80. GIBHARD. Stock Images, Royalty-Free Images & Vectors. Sound effects - creepy. This is a donation-driven website…no annoying advertising here. Donations are made through PayPal. Any amount you can manage is extremely helpful and greatly appreciated. Thanks. To download any sound effect to your computer, simply right-click on the link under its player and choose “save link as.”

Then choose the location on your system where you would like to save it. TurboGrafx-16. Rooftop Chase ストーリー. Thoughts Alive. VR Microtalks: Intersections of Design & Technology. How Crytek Builds 3-Dimensional UI for VR. Oculus Connect 2: Navigating New Worlds: Designing UI and UX in VR. Office - Vincenzo De Cotiis.

Masculin interiors by Vincenzo De Cotiis. These dark masculin interiors by Vincenzo De Cotiis are quite engaging. They have a sense of warmth and luxury to them. I love the old world architecture meeting modern, you haven’t hear that from me before. I feel like there is a quality of materials that is expected with these spaces. There is something so perfect in the first picture. Is it the mix of or lack of color? COZY. Lessons Learned from VR Prototyping. UE4 Console Variables and Commands. QBeh-1 - the atlas cube game play with Oculus Rift DK2.

Vektron Revenge: VR retro shooter updated for HTC Vive. Geometry dash. Save 10% on Vektron Revenge on Steam. Designing for Daydream - Google I/O 2016. REVIEW: Duelyst – PLAY! PLAY! I remember a time when I thought that I liked chess. And then I realized that I don’t like to lose. Best art style in video games. Gearbox Borderlands Environment Demonstration. How can I make movement on a sphere? Virush for Google Daydream VR Gameplay / Hands-On. Coray Seifert's Blog - 7 Lessons I Learned Making VR Games at Experiment 7. The following blog post, unless otherwise noted, was written by a member of Gamasutra’s community.

The thoughts and opinions expressed are those of the writer and not Gamasutra or its parent company. Let's Play Audio Arena on Google Daydream VR Gameplay / Hands-On. Virush for Google Daydream VR Gameplay / Hands-On. Youtube. Uni Bullet Hell - sample shot pattern. Bullet Patterns Test for Submission. Can Bullet Hell Games Be Meditative? Data and Insights in the VR Market. My Favorite Item Combinations - The Binding of Isaac. How to make object be the same size on any distance? Kotaku Plays Night In The Woods' Rhythm Game. Steam Card Exchange. Steam Card Exchange. Revenge of the Titans. Hyper light drifter. Gateworld by juliedillon on DeviantArt.