How to Begin Running (with Running Plan and Motivation Tips) Steps Part 1 Getting Out There <img alt="Image titled Begin Running Step 1" src=" width="728" height="546" class="whcdn">1Go outside and run. 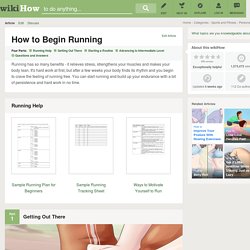 Now. The best way to start running is simply to put on a pair of running shoes and hit the pavement, dirt or grass. Track and field. Track and field is a sport which combines various athletic contests based on the skills of running, jumping, and throwing.[1] The name is derived from the sport's typical venue: a stadium with an oval running track enclosing a grass field where the throwing and jumping events take place. 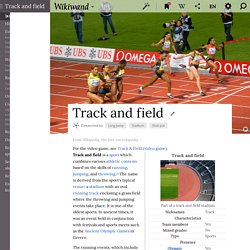 It is one of the oldest sports. In ancient times, it was an event held in conjunction with festivals and sports meets such as the Ancient Olympic Games in Greece. Records are kept of the best performances in specific events, at world and national levels, right down to a personal level. However, if athletes are deemed to have violated the event's rules or regulations, they are disqualified from the competition and their marks are erased.

In North America, the term track and field may be used to refer to other athletics events, such as the marathon, rather than strictly track-based events.[2] History. 60 metres. Sprint (running) Usain Bolt, world record holder in 100 m and 200 m sprints Sprinting is the act of running over a short distance at (or near) top speed. 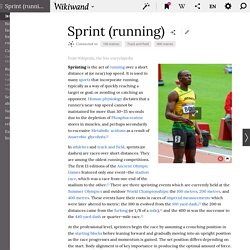 It is used in many sports that incorporate running, typically as a way of quickly reaching a target or goal, or avoiding or catching an opponent. Human physiology dictates that a runner's near-top speed cannot be maintained for more than 30–35 seconds due to the depletion of Phosphocreatine stores in muscles, and perhaps secondarily to excessive Metabolic acidosis as a result of Anaerobic glycolysis.[1] At the professional level, sprinters begin the race by assuming a crouching position in the starting blocks before leaning forward and gradually moving into an upright position as the race progresses and momentum is gained.

The set position differs depending on the start. Note: Indoor distances are less standardized as many facilities run shorter or occasionally longer distances depending on available space. 60m is the championship distance. Competitor.com: Marathon Training Plans, Running Shoe Reviews, Nutrition... The Beginner's Guide To Safe Urban Running. Running in the heart of a metropolitan city can be a lot different than running in a quiet neighbourhood or on a trail. 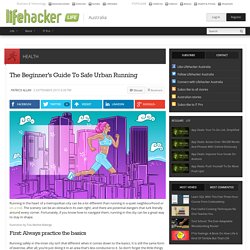 The scenery can be an obstacle in its own right, and there are potential dangers that lurk literally around every corner. Fortunately, if you know how to navigate them, running in the city can be a great way to stay in shape. Illustration by Tina Mailhot-Roberge. First: Always practice the basics Running safely in the inner city isn’t that different when it comes down to the basics. Brief workouts for runners: dynamic warm-up. OK, this time it's not really a workout. 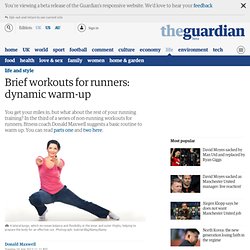 It's a dynamic warm-up. And a short one at that. But if you are someone who goes out on their long run after no more than a cup of tea to warm up - or, and this is even more common, uses the same static stretching you were taught by your PE teacher in the 80s, then you should find this routine a better way to prepare. Certainly, doing static stretching before a run is not the best idea. Studies (McMillian et al., 2006) have shown that standing and holding stretches before performance will actually hinder your performance. The plan The exercises in the videos below target the muscles used when running. The workout. 11 Training Tips for Running Your First Half-Marathon. Photo: Getty Images Running a half-marathon is all the rage these days, especially among women. 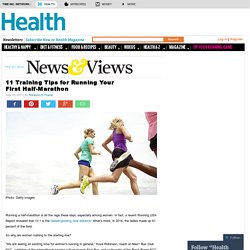 In fact, a recent Running USA Report revealed that 13.1 is the fastest-growing race distance. What’s more, in 2014, the ladies made up 61 percent of the field. So why are women rushing to the starting line? Post-Run Stretches. This Runner&#039;s Trials. Running. N Her Shoes. Complete Marathon Running Training Programs - Marathon Training ...

Jogging. Jogging is a form of trotting or running at a slow or leisurely pace. 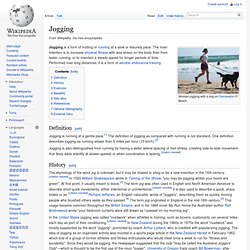 The main intention is to increase physical fitness with less stress on the body than from faster running, or to maintain a steady speed for longer periods of time. Performed over long distances, it is a form of aerobic endurance training. Running. A man running in Chicago Runners approach mile 4 of the F^3 Half Marathon in Chicago, 2013 The ancestors of mankind developed the ability to run for long distances about four and a half million years ago,[citation needed] probably in order to hunt animals. 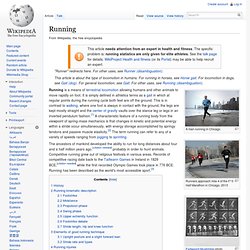 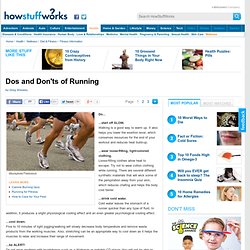 Walking is a good way to warm up. It also helps you lower the exertion level, which conserves resources for the end of your workout and reduces heat build-up. ...wear loose-fitting, light-colored clothing. Loose-fitting clothes allow heat to escape. ...drink cold water. Cold water leaves the stomach of a runner quicker than any type of fluid. ...cool down. Five to 10 minutes of light jogging/walking will slowly decrease body temperature and remove waste products from the working muscles. ...be ALERT! Do not wear anything with headphones such as a Walkman or portable CD player. ...keep your head up. This will help keep the rest of your body in alignment, which will help prevent injuries. ...watch your arms. The chase project. Running Shirtless. Runstreet. TLC Cooking &quot;Food and Recipes&quot;

Eat, Live, Run. Running and Jogging. John&#039;s Barefoot Running Blog. Barefoot Ted&#039;s Adventures. The start of LUNA Sandals can be traced back to March 2006 on the day Manuel Luna made me my first pair of huaraches. 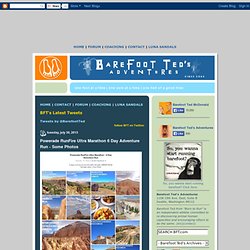 By 2007, I was able to run the Copper Canyon Ultra Marathon in the first LUNAS that I made myself with Vibram soling material. Things really got fully underway when I was joined by co-founders Scott & Bookis Smuin and moved from my garage to the "Factory" on Capitol Hill in Seattle in 2010. Since then, LUNA has singlehandedly jump-started the age-old tradition of making minimalist adventure sandals by hand, and through hard work and constant vigilance we are continually improving on a classic piece of footwear. Like surfers making surfboards, we hone our sandals and refine them. Form, function, style, durability, comfort and ease-of-use, all these things go into making LUNAS by hand in Seattle. Chris&#039; Ultra Blog. Running over Mountains and around the World. The chase project. This Runner&#039;s Trials. Runner&#039;s Information &amp; Advice. Runner&#039;s World: Running Shoes, Marathon Training, Racing. Running Shoe Reviews - Serving All Your Running Needs.