Celtic art. The reverse side of a British bronze mirror, 50 BC - 50 AD, showing the spiral and trumpet decorative theme of the late "Insular" La Tène style Celtic art is the art associated with the peoples known as Celts; those who spoke the Celtic languages in Europe from pre-history through to the modern period, as well as the art of ancient peoples whose language is uncertain, but have cultural and stylistic similarities with speakers of Celtic languages. 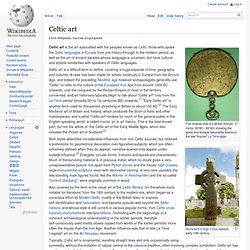 Celtic art is a difficult term to define, covering a huge expanse of time, geography and cultures. Both styles absorbed considerable influences from non-Celtic sources, but retained a preference for geometrical decoration over figurative subjects, which are often extremely stylised when they do appear; narrative scenes only appear under outside influence.[4] Energetic circular forms, triskeles and spirals are characteristic. Background[edit] Carved stone ball from Towie in Aberdeenshire, dated from 3200–2500 BC[7] Art in ancient Greece. The arts of ancient Greece have exercised an enormous influence on the culture of many countries all over the world, particularly in the areas of sculpture and architecture. 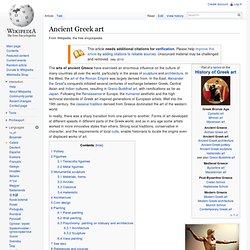 In the West, the art of the Roman Empire was largely derived from. In the East, Alexander the Great's conquests initiated several centuries of exchange between Greek, Central Asian and Indian cultures, resulting in Greco-Buddhist art, with ramifications as far as Japan. Engraved gem. Technique[edit] History[edit] Antelopes attacked by birds: cylinder seal in hematite and its impression. 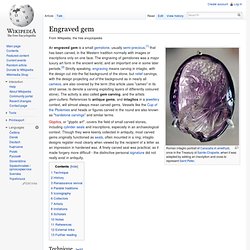 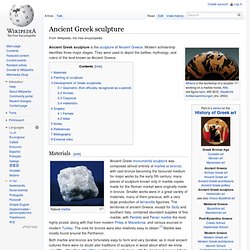 Modern scholarship identifies three major stages. They were used to depict the battles, mythology, and rulers of the land known as Ancient Greece. Materials[edit] Ancient Greek monumental sculpture was composed almost entirely of marble or bronze; with cast bronze becoming the favoured medium for major works by the early 5th century; many pieces of sculpture known only in marble copies made for the Roman market were originally made in bronze.

Contrapposto. Kritios Boy. c. 480 BC, was the first statue that we know of to use contrapposto. 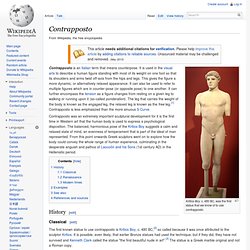 Contrapposto was an extremely important sculptural development for it is the first time in Western art that the human body is used to express a psychological disposition. Academy of art canada. Life drawings. Art graphica. Craig reay. Brothers Hildebrandt. The Brothers Hildebrandt (born January 23, 1939 in Detroit, Michigan) are American twin brothers who worked collaboratively as fantasy and science fiction artists for many years. 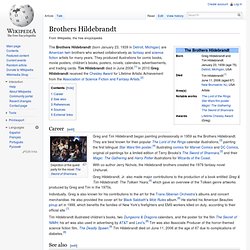 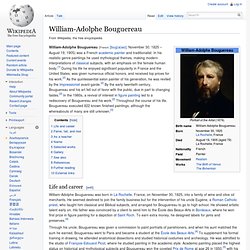 In his realistic genre paintings he used mythological themes, making modern interpretations of classical subjects, with an emphasis on the female human body.[1] During his life he enjoyed significant popularity in France and the United States, was given numerous official honors, and received top prices for his work.[2] As the quintessential salon painter of his generation, he was reviled by the Impressionist avant-garde.[2] By the early twentieth century, Bouguereau and his art fell out of favor with the public, due in part to changing tastes.[2] In the 1980s, a revival of interest in figure painting led to a rediscovery of Bouguereau and his work.[2] Throughout the course of his life, Bouguereau executed 822 known finished paintings, although the whereabouts of many are still unknown.[3] Life and career[edit] Jack Vettriano art. Jack Vettriano. 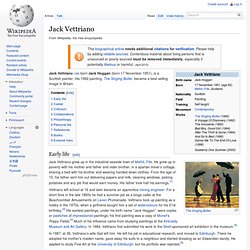 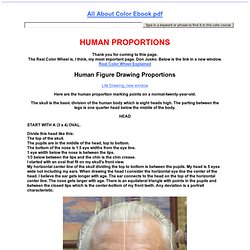 Divide this head like this:The top of the skull.The pupils are in the middle of the head, top to bottom.The bottom of the nose is 1.5 eye widths from the eye line.1 eye width below the nose is between the lips.1/3 below between the lips and the chin is the chin crease.I started with an oval that fit on my skull's front view. My horizontal center line of the skull dividing the top to bottom is between the pupils. My head is 5 eyes wide not including my ears. When drawing the head I consider the horizontal eye line the center of the head. I believe the ear gets longer with age. The head sideways is one head-length high and one head-length wide. Scott eaton. Satokos origami jewellery. Dance of death (how mediaeval people viewed death) Adam and eve in art. Artists blog. Tesia Blackburn, author of Acrylic Painting With Passion, speaks to the difficulty of portraying reality, and the idea of playing with abstraction to convey your message. 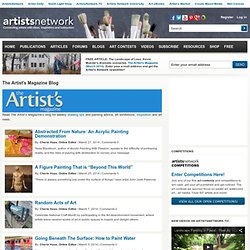 "There is always something just under the surface of things," says artist John Jude Palencar. Celebrate National Craft Month by participating in the Art Abandonment movement, where artists leave random works of art in public spaces to inspire and delight others. “In many of my water paintings," says Charlene Gerrish, “I focus almost solely on the reflections, because that’s where the strongest graphic possibilities lie. I love when a painting looks like an abstract design up close, but reveals its true subject at a distance. " Read more here! It stands to reason that the more you do something, the better you’ll get.

“The subject of Ray is my brother,” says Debra Carr. Rex and Susan Beanland are retired teachers whose paths of sharing knowledge didn’t end, but rather began anew once they left the classrooms. Cakes Out of This World. 29 Oct 2010 October 29, 2010 What sorts of cake do you wish – arts and crafts cake decorating styles cake layout strategies cake styles steampunk layout themed birthday desserts themed truffles.The Yoda Mind cake, is that the cake artwork is getting to be the newest pattern? This really is what we meant! Official sigur rós website. Modern &amp; contemporary artists and art. Libby Jones. Art Tutorial. The second bit of advice a beginning artist usually gets is “draw from life”. And it is excellent advice! After all, if you can't draw what is right in front of you, you certainly won't be able to draw what you see in your imagination either. But the advice is a bit short, and will usually leave the artist behind unsure of what to do next. This chapter will help you to get started by explaining some different sketching methods you can use.

If you ever thought how cool are those evil scientist goggles, you’ll be pleased to know that design team at Double A Stitching has created a pair of amazing steampunk goggles for evil scientists or pilots, so let’s check them out.As you might notice, these glasses are simply beautiful, and we’re positive that you’re going to like them, even if you’re not into steampunk fiction.

Marble sculpture. Art Attack. Encyclopaedia Romana. AR-Gallery: Dealers of Artwork. Drawing Life by Fred Hatt. Study of Hands, c. 1474, by Leonardo da Vinci You may hear it said that artists hate to draw hands, and I don’t think there is any part of the human body that is more challenging to draw well than the hands. Of course for that very reason artists who relish a challenge love to draw hands. In the drawing classes I supervise, I have often noted that beginning artists tend to draw hands (and feet) too small, while the most accomplished artists often draw hands disproportionately large. Hands are complicated structures capable of an incredible range of pose and expression. Craig Pitman&#039;s Portfolio. Arts &amp; Entertainment - How To Information. Arts &amp; Entertainment - How To Information. Curated Online Exhibitions. The Ideal Beauty of the Human Body in Art. Geeks of Doom. Be As You Are - Fun &amp; Funky Stuff.