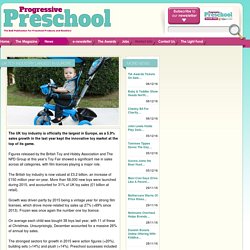 Figures released by the British Toy and Hobby Association and The NPD Group at this year’s Toy Fair showed a significant rise in sales across all categories, with film licences playing a major role. The British toy industry is now valued at £3.2 billion, an increase of £150 million year-on-year. Toy Industry Journal. Spielwarenmesse: The British toy market: licenses are dominating the United Kingdom. Traditional toys in the United Kingdom achieved unprecedented growth through the successful application of surprisingly popular toy licenses to classic play themes. 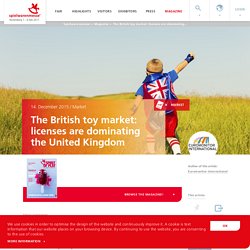 As toy companies move away from hypermarkets to smaller local convenience stores, pocket money toys grew in importance as a driver of impulse purchases. In 2014, licensing continued to grow in importance as a catalyst for sales of traditional toys. Manufacturers reported a distinct and sustained increase in the number of products at retail derived from film, television or video game intellectual property to 30% of value in 2014 (2008: 23 %). The ongoing expansion of licensing within UK traditional toys and games has been driven primarily by the requirements of the dominant business model that has emerged within the US film industry. UK Toy Sale 2015 - NPD Group UK. January 25th 2016: The UK toy market saw a 5.9% increase in sales in 2015, helping to keep it in the top spot as the largest toy market in Europe. 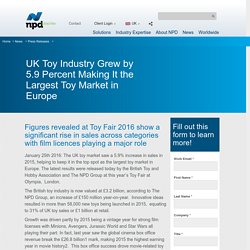 The latest results were released today by the British Toy and Hobby Association and The NPD Group at this year’s Toy Fair at Olympia, London. The British toy industry is now valued at £3.2 billion, according to The NPD Group, an increase of £150 million year-on-year. NPD Group United Kingdom - Market Research Trends & Analysis. Business Analysis of the toy industry. All the up-to-date contact details and buyers for the UK? 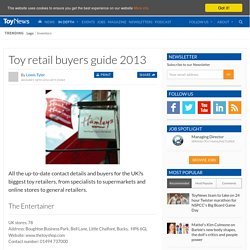