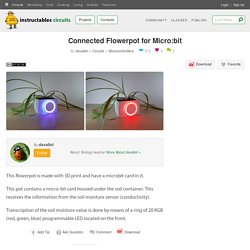 It have to be 20 minus 1. It counts from zero for the first LED. Then, in the "repeat indefinitely" part, insert a variable 'moisture' that recovers the value of the sol moisture sensor, connected in P0. Insert a condition with as a threshold of value 300. if there is a value less than 300, display on the ring of LED, the red color in P1 port. else, for a value greater than 300, display on the ring LED, the color blue in P1. 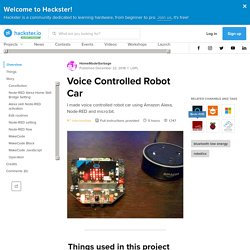 Go to the following and click Resister. Device registration After registration, select the Devices tag and click Add Device. We have created a device for Alexa "Rotation" for turning the robot car's motor forward and backward. Tutorial - Using the micro:bit and Make Code with Data Streamer - Excel Data Streamer. Mini:mu - music with the glove. In the second of our mini:mu lessons, we look at how to use gestures to control sounds. 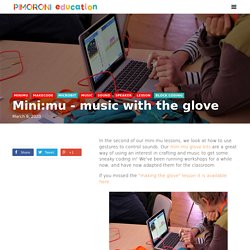 Our mini:mu glove kits are a great way of using an interest in crafting and music to get some sneaky coding in! We've been running workshops for a while now, and have now adapted them for the classroom. If you missed the "making the glove" lesson it is available here. In lesson two, your class will learn about physical computing and the role coding plays in creative technologies.

They will use a block code editor to create and upload their first code to the microbit, then program simple sounds and tunes to be triggered by movement and gesture. Download the lesson plan and handouts here (pdf) Micro:bit Projects. Online Learning with MakeCode. (6) How to build a micro:bit weather station. Microbit2minecraft – Google Drive. Get started with micro:bit + Scratch – KatieDays. Micro:bit binary adding machine.

I’m going to how to show you to turn two or more micro:bits in to a binary adding machine, using the same code on every micro:bit. 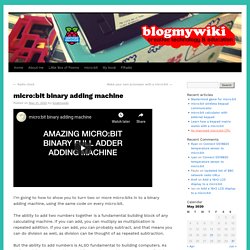 The ability to add two numbers together is a fundamental building block of any calculating machine. If you can add, you can multiply as multiplication is repeated addition. If you can add, you can probably subtract, and that means you can do division as well, as division can be thought of as repeated subtraction. But the ability to add numbers is ALSO fundamental to building computers. As well as solving maths problems, adding numbers enables computers to find data in memory, step through lists of instructions as well as more exciting things like moving a space ship across your screen in a game.

Electronic circuits that can do sums – and do them very quickly – are called adders. Humans usually count in a system based around the number 10 – because we have 10 fingers. So switches form the circuits that make up computers, by making logic gates. How about 5 + 5? Free Platform for Coding, Making and Inventing. MINI.MU Glove kit without Micro: bit - Ultra-lab. The MINI.MU is a musical glove for children. 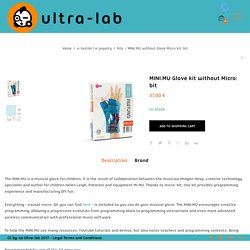 It is the result of collaboration between the musician Imogen Heap, creative technology specialist and author for children Helen Leigh, Pimoroni and equipment MI.MU. Thanks to micro: bit, this kit provides programming experience and manufacturing DIY fun. Everything - except micro: bit you can find here - is included so you can do your musical glove. The MINI.MU encourages creative programming, allowing a progressive evolution from programming block to programming interactions and even more advanced wireless communication with professional music software. To help the MINI.MU use many resources: Youtube tutorials and demos, but also notes teachers and programming contests. Robotic Prosthetic Hand by grossrc. Activity Fortune Teller. Portuguese_Microbit_Plants. Soil Moisture. Home learning. Micro:bit binary adding machine. Microbit/retos_microbit_makecode.pdf at master · pedroruizf/microbit. Build a Bluetooth Selfie Remote for Your Smartphone Using micro:bit.